This is Why Liberty Counsel’s “Naughty and Nice” List is Worse Than You Think December 14, 2017 Hemant Mehta

For years now, Religious Right group Liberty Counsel has released a “Naughty and Nice” list, telling Christians where they ought to shop over the winter. The “Nice” list includes companies that promote Christmas (by name) and Jesus. The “Naughty” list includes the companies that say “Happy Holidays” because they “silence and censor Christmas.”

It’s easy to dismiss that as a publicity stunt (which it is), but there’s really something sinister beneath it. Essentially, the list says that any company that treats atheists and Jews and Muslims the same way they do Christians are doing something wrong. By being as inclusive as possible, they’re somehow being anti-Christian.

Jay Michaelson, a contributing editor at The Forward, urges Jewish families to respond by shopping at the “Naughty” stores:

Simply shop at the “naughty” stores that believe in religious pluralism, inclusion, welcoming, and diversity — and avoid the “nice” ones that make anyone who isn’t Christian feel like a second-class citizen.

It’s not a bad idea… until you realize the list is small and there aren’t that many things you need to buy from Radio Shack anymore. Still a nice sentiment though.

Michaelson also points out that the list’s existence should serve as a reminder that these kinds of groups don’t really care about protecting religious liberty. They just want to preserve Christian dominance.

After all, if Liberty Counsel were really interested in liberty, they would reward businesses which honor all religions rather than elevate the majority religion over minority ones.

He also says of Liberty Counsel: “These aren’t victims; they’re oppressors with a victim complex.”

We can also take satisfaction in knowing this list isn’t really that influential. I’ve never read about a store manager saying there was a change in sales numbers because someone glanced at this list before doing their shopping (companies like Amazon don’t appear on the list at all).

So all you end up with is a PR stunt that shows how despicable conservative Christian “values” really are. They don’t want you doing business at any store that treats Jews and atheists with the same respect they show Christians. 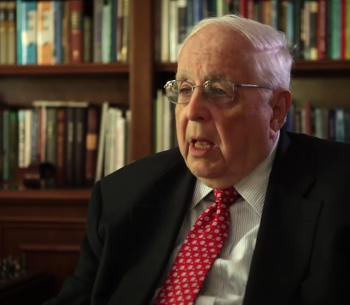 December 15, 2017 Against Trump's Promises, GOP Won't Include Johnson Amendment Repeal in Tax Bill
Browse Our Archives
What Are Your Thoughts?leave a comment