Last night, Roy Moore reiterated that he wasn’t conceding his Senate race in Alabama to Democrat Doug Jones just yet before reminding us why he had no business ever going to Congress even before the molestation scandal came to light.

Moore sounded like a retiring pop star singing his greatest hits, hitting on his campaign platform of We’re Not Fundamentalist Christian Enough.

Today, we no longer recognize the universal truth that God is the author of our life and liberty.

Abortion, sodomy, and materialism have taken the place of life, liberty and the pursuit of happiness.

We have stopped prayer in our schools.

We have killed over 60 million of our unborn children.

We have redefined marriage and destroyed the basis of family, which is the building block of our Country.

We have even begun to recognize the right of a man to claim to be a woman, and vice versa.

Immorality sweeps over our land.

Speaking of immorality, nowhere in that video was there an apology to the women who accused him of molestation and general creepiness.

And, just for the record, God’s existence isn’t a universal truth; life, liberty, and the pursuit of happiness are still possible; prayer is allowed in schools; “unborn children” is, by definition, an oxymoron; marriage wasn’t redefined but rather opened to more people; and anyone who thinks being transgender amounts to a man claiming to be a woman (or vice versa) doesn’t understand the word.

Statements like these are why Moore should’ve lost this race long before the molestation accusation occurred. What’s scary is how many people agree with Moore that these are the real problems facing America — and Moore guiding a 14-year-old to touch his genitals wasn’t reason enough to vote against him.

After his stunning loss, Moore should have been the first person to admit God just didn’t mean for him to serve in the Senate. How dare he defy God’s wishes by calling for a recount? It’s almost like he doesn’t trust God enough to accept His decisions, so he’s going to try and circumvent them if they suit his interests.

CNN’s Daniel Burke was right to point out that African-American women, who came out in droves to support Jones, are also churchgoers and “Values Voters.” But their values involve helping the poor, making sure Americans have health care, and making government more effective, all things Moore doesn’t give a damn about because he’s too busy bragging about how he’ll ruin our country even more (with God’s help) when he’s elected. 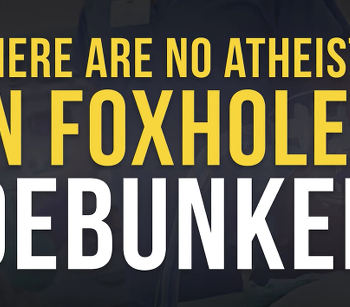 December 13, 2017
There Are No Atheists in Foxholes (Debunked)
Next Post