Former Republican U.S. House Speaker Dennis Hastert, who championed “family values” during his tenure in Congress, is no longer allowed to have contact with anyone under 18 unless there’s an adult present who knows about his past crimes related to child sex abuse. 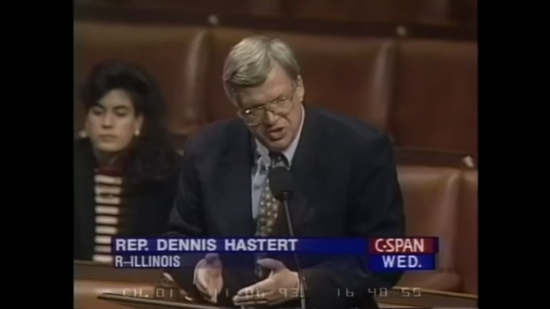 “You shall not have contact with any person under the age of 18, except in the presence of a responsible adult who is aware of the nature of his/her background and current offense, and who has been approved by the probation officer and treatment provider,” the restrictions state.

Hastert, the longest-serving GOP Speaker in U.S. history, has never faced sexual abuse charges in court because he paid off a former student who made those allegations until the statute of limitations had expired. He pleaded guilty to those “hush money” charges in October 2015.

Judge Thomas M. Durkin didn’t explain why Hastert was barred from unsupervised contact with children, but the move is unexpected because the former politician is three months into his two-year period of supervised release from prison, according to the NY Post.

Others included barring Hastert from possessing pornography and using “any sex-related telephone numbers.” He also must allow — and pay for — the installation of software that records all his computer activity, from browser history to email correspondence and internet chats.

In handing the Illinois Republican a 15-month prison term in April of last year, Durkin branded Hastert “a serial child molester,” citing at least four students abused by him when he coached at Yorkville High School in suburban Chicago from 1965 to 1981.

The big revelation from all this isn’t that Hastert molested children — we already knew that. It’s that there could be something new that spurred these restrictions that weren’t previously required. Since he has been on supervised release for months without them, it’s possible he has been hurting kids again or doing something else that raised red flags with the judge.

Still, it’s good that Hastert is back in the news because many people have forgotten about him in the wake of Roy Moore. It’s important to recognize that hardcore Christian Right politicians who rail against same-sex marriage and promote “ethics” that are supposedly inspired by God are not exempt from their own sexual scandals, and kids are too often victimized in these cases.

Roy Moore isn’t the only one, and we have to hold all of these abusers accountable, regardless of our political/religious views. Hastert’s predicament is a reminder that this problem isn’t new.

December 14, 2017 Tax-Free Housing for Religious Leaders Is Officially Illegal (Pending Appeal)
Browse Our Archives
What Are Your Thoughts?leave a comment