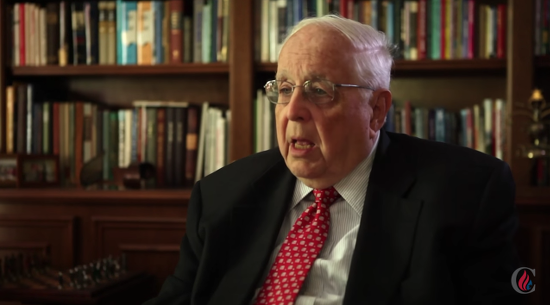 Paul Pressler, a retired Texas state judge and a leader of the Conservative Resurgence movement for the Southern Baptist denomination, is accused of sexually assaulting the child over many years. The alleged victim, Gerald Duane Rollins, says Pressler led his Bible study program at Houston’s First Baptist Church.

The lawsuit alleges that Paul Pressler, a former justice on the 14th Court of Appeals who served in the Texas state house from 1957–59, sexually assaulted Duane Rollins, his former bible study student, several times per month over a period of years. According to the filing, the abuse started in the late 1970s and continued less frequently after Rollins left Houston for college in 1983…

This could be the worst part of this whole case. Not only is Pressler accused of violating this young boy sexually, but also of using his religion to cover it up. It’s one of the most despicable things a religious leader could do to a young believer, and it completely goes against notion that Christians live by some divinely inspired moral code.

Actually, as it turns out, it is the religion itself that facilitated the sexual abuse and allowed it to continue, according to Rollins. He names the church itself as a defendant and says kids are treated as property under Pressler’s form of Calvinism.

The lawsuit claims Patterson, like Pressler, “appears to be a closet Calvinist” and that the supposedly Calvinistic theology they advocated during the Resurgence regarded women and children as “property.” Pressler’s co-defendants, the suit claims, made “minors sexually available to Pressler,” who “under Calvinist dogma” is “considered to be [among the] Vice Regents of God.”

Southwestern and Houston’s First, the lawsuit alleges, “fraudulently misrepresented to the public in word and deed, including to Plaintiff Rollins and his mother, that Pressler was a Godlike, sexually safe, moral, and great person of the earth who, as a Magistrate, worked God’s wisdom and thus would not be sexually dangerous to minors.”

Pressler and the church have “categorically” denied the allegations, but false reports of this kind are very rare. The court will ultimately decide whether or not there is evidence to support these claims, but, if true, they are part of a pattern of sexual abuse minors among religious and political leaders who hide behind religious fundamentalism.

This isn’t just about Roy Moore, but his downfall could help us pay closer attention to these types of abuses and maybe even prevent them.