Donald Trump has been saying for years now that if he was elected, people would say “Merry Christmas” again… even though that was never a problem except in the minds of paranoid evangelicals who treat paper cuts as decapitations.

Guess what? It turns out Americans don’t really give a damn if anyone says the phrase. 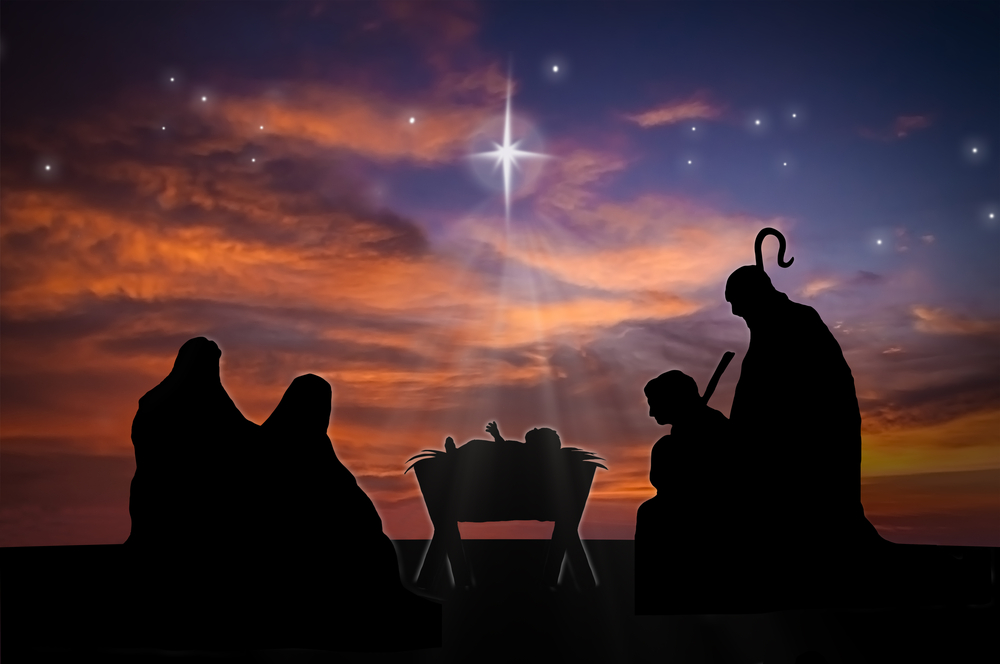 A new study from the Pew Research Center finds that more than half of Americans don’t care if retail workers say “Merry Christmas” to them. 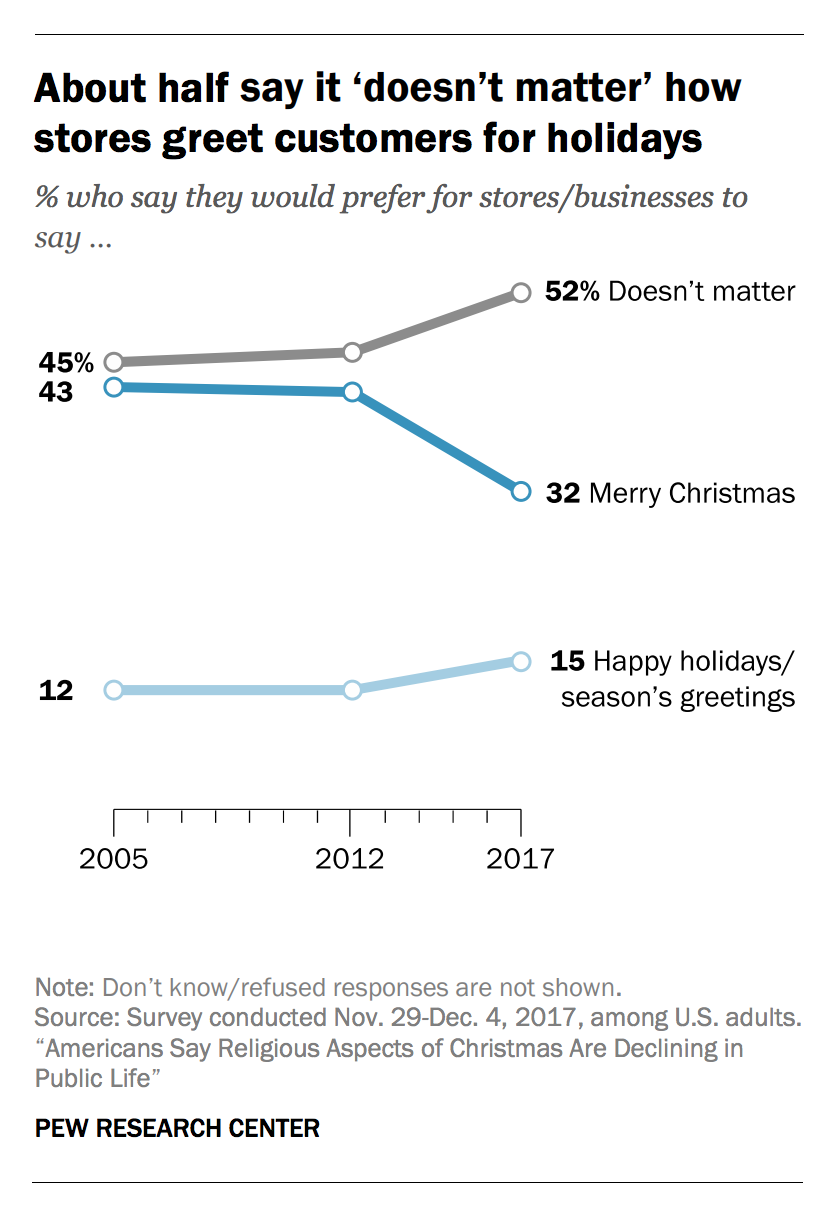 A rising share of Americans say they do not have a preference about how they are greeted in stores during the holiday season, while a declining percentage prefer to have stores greet them with “merry Christmas.” Today, fully half of the U.S. public (52%) says that a business’ choice of holiday greeting does not matter to them, while roughly a third (32%) prefers for stores and businesses to greet customers with “merry Christmas” during the holidays. When this question was first asked over a decade ago, and then again in 2012, roughly equal shares expressed a preference for “merry Christmas” and said it didn’t matter.

Imagine that. In the years the Right was harping on and on about the “War on Christmas,” people cared less and less about it. It’s almost as if the Right made up a fake culture war issue that wasn’t reflective of reality…

Even more surprising is how fewer Americans are buying into the Baby Jesus myth. In all the areas Pew asked about — whether Jesus was born to a virgin mother, if wise men brought Jesus gifts, etc. — the numbers were down from a few years ago. 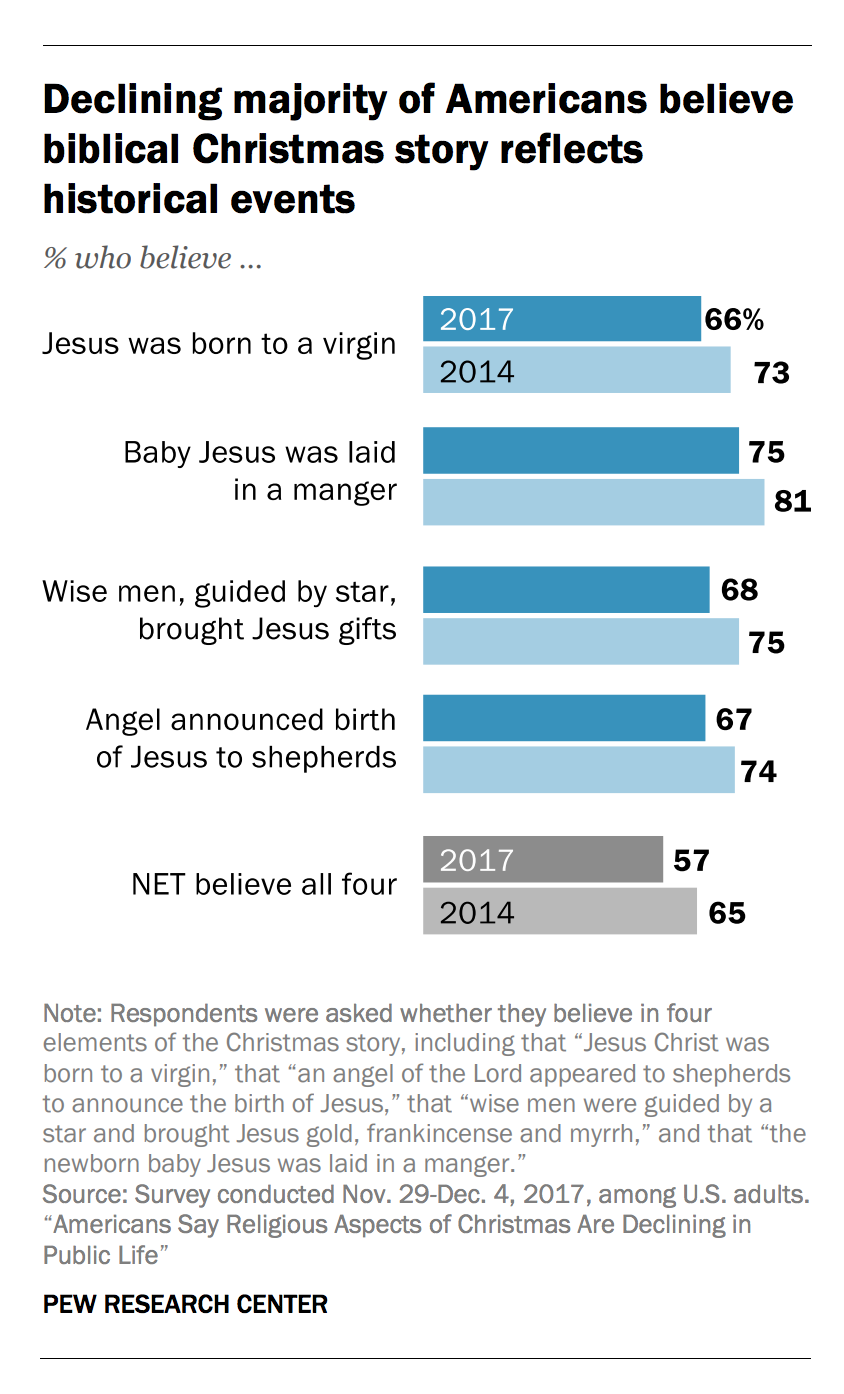 Among the topics probed by the new survey, one of the most striking changes in recent years involves the share of Americans who say they believe the birth of Jesus occurred as depicted in the Bible. Today, 66% say they believe Jesus was born to a virgin, down from 73% in 2014. Likewise, 68% of U.S. adults now say they believe that the wise men were guided by a star and brought gifts for baby Jesus, down from 75%. And there are similar declines in the shares of Americans who believe that Jesus’ birth was heralded by an angel of the Lord and that Jesus was laid in a manger as an infant.

That’s progress. And you don’t get results like that unless even Christians no longer believe the myths, and that’s precisely what happened. When it comes to the virgin birth for example, 85% of Christians still believe that story, but it’s down from 90% in 2014.

There was one other result worth mentioning: When it comes to religious displays on public property — like Nativity scenes outside a courthouse — fewer Americans want to see it. Only 73% of Christians says displays like that are okay, down from 79% in 2014. (Only 50% of the Unaffiliated agree it’s okay, compared to 57% a few years ago.) But here’s the kicker: 19% of Christians say no religious displays should be on government grounds at all, and that’s an increase of 5% from 2014.

Why are we seeing this decline? Pew doesn’t speculate, but I can.

I would attribute it to large aspects of Christmas turning into a culture war issue. Many people are just fed up with it. When you live in a society surrounded by non-Christians, you don’t have some pressing need to push Christian myths and phrases upon everyone else. It’s okay to say “Happy holidays” because you understand it’s just more inclusive.

You’re also less likely to believe the Nativity story when you realize the other people who believe it are the sort of people who overwhelmingly support people like Donald Trump and Roy Moore. When conservative Christians are so completely in the tank for those bigots, and their impaired judgment is on display every damn day, why would you want to believe their leaders on anything else, especially the stuff that’s more far-fetched?

People are welcome to celebrate Christmas in a couple of weeks. Or Hanukkah now. Or whatever the hell you want, whenever you want. If you’re happy, I’m happy. But it takes a special kind of myopic Christian to assume everyone has to mark the winter the same way they do, and anyone who disagrees is somehow Decembering wrong.

Let’s hope these numbers are the beginning of a trend. 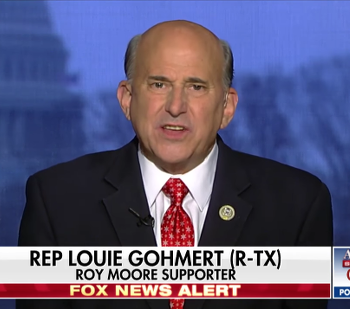 December 13, 2017 Rep. Louie Gohmert: Had Hillary Clinton Won, I'd Be in Jail for My Christianity
Browse Our Archives
What Are Your Thoughts?leave a comment