As we await the results from the special election in Alabama, let’s take a moment to bask in how incompetent Roy Moore‘s spokesperson is. Ted Crockett spoke with Jake Tapper on CNN’s The Lead this afternoon, and he was asked a simple question: Does Moore still believe, as he did in 2005, that homosexuality ought to be illegal?

Somewhere, even evangelical Christians cringed at that one. The evangelical party line these days is that people can indeed be gay or lesbian, but their civil rights are still up for debate. They may have lost that battle, but dammit, at least they don’t have to sell cake to homosexuals.

But the more important moment, perhaps, came when Tapper asked Crockett if Moore still believed, as he did in 2006, that Muslims shouldn’t be allowed in Congress.

This time Crockett’s ignorance was loud and clear.

Roy Moore campaign spokesman responds with silence when asked if he knew people can be sworn in with a text other than the Christian bible pic.twitter.com/B65qIKBjlI

TAPPER: Judge Moore has said that he doesn’t think a Muslim member of Congress should be allowed to be in Congress. Why? Under what part of the Constitution?

TAPPER: You don’t have to actually swear on a Christian Bible. You can swear on anything, really. I don’t know if you knew that…

CROCKETT: Oh no, I swore on the Bible. I done it three times.

TAPPER: I’m sure you have. I’m sure you picked a Bible, but the law is not that you have to swear on a Christian Bible. That is not the law. [Long pause] You don’t know that?

CROCKETT: I know that Donald Trump did it when we made him president.

TAPPER: Because he’s Christian and he picked it.

Tapper got all of that right. Rep. Kyrsten Sinema sworn in on a copy of the Constitution. Rep. Keith Ellison, on a Qur’an once owned by Thomas Jefferson. You get to decide what to swear an oath on. There’s no mandate it has to be a Bible.

Crockett doesn’t get that. And Moore likely doesn’t care because the Constitution means nothing to him when there’s a Bible he can point to.

To put that another way, the men who think the Bible is a mandatory part of what it means to be a member of Congress will be throwing multiple women who accused Moore of child molestation and hitting on underage girls under the bus in order to show how godly he is. On top of that, they’re arguing that large segments of the American population are ineligible of serving in office or should outright be arrested for who they are, because that’s what Jesus wanted.

Roy Moore is ignorant and awful — and he has an army of evangelical Christians backing him no matter how obvious that is to everyone else. 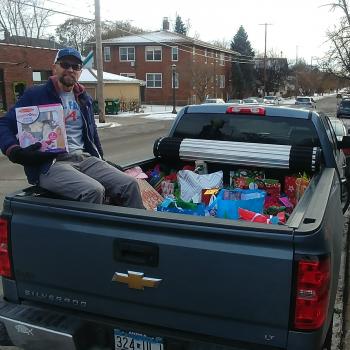 December 12, 2017
For the "War on Christmas," These Atheists Donated to a Children's Hospital
Next Post 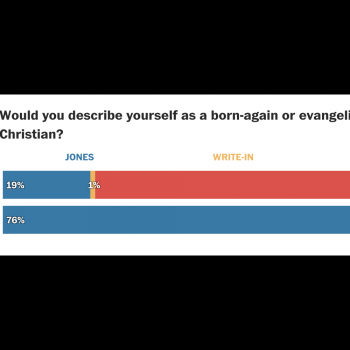