In a shocking turn of events, alleged child molester Roy Moore lost the special election in Alabama, and Democrat Doug Jones will take the seat vacated by Jeff Sessions. There’s a lot to digest, and it’s still hard to believe, but let’s point out a few takeaways from the exit polls.

80% of white born-again Christians supported Roy Moore, according to the Washington Post.

To put that another way, a majority of white evangelicals are upset that a child molester won’t represent their Christian values in the Senate.

Those results also show that literally everyone else refused to back someone as bigoted, theocratic, and perverse as Moore. (You’re welcome, America.)

There are many demographics that helped put Jones over the top — including, notably, black women, 98% of whom backed Jones. But when the race is as close as it was, the atheist vote shouldn’t be ignored either. The official numbers haven’t come out yet, but while the Religious Right didn’t put Moore over the top, those of us who support church/state separation helped Doug Jones win a Senate seat in freakin’ Alabama.

Even in Alabama, a pro-choice Democrat found a way to win. What an incredible victory for Doug Jones and decency. 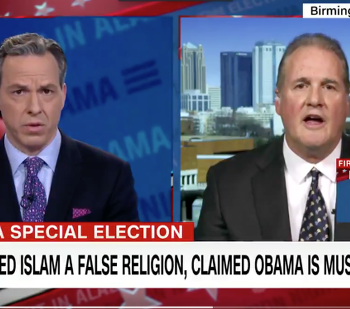 December 12, 2017
Roy Moore's Spokesman (Wrongly) Thinks Swearing an Oath on a Bible Is Mandatory
Next Post

December 13, 2017 The Christian Faith Lost in Alabama's Election, Says Christianity Today Editor
Browse Our Archives
What Are Your Thoughts?leave a comment