One of the many misconceptions that pervade American society about atheists is that they live bleak, joyless lives, dreary and cynical, pursuing only brief and shallow pleasures without deep happiness, without meaningful love, and certainly without romance. As the thinking goes, when atheism is considered selfish since you’re not living for a “higher power,” how can you possibly live for someone else?

On October 1 of 2016, two dear atheist friends of mine, Dan Fincke and Lex Sourisseau announced on Facebook that they would be getting married at the end of the month. When I congratulated them, I told them that when they became engaged many months before, I had idly fantasized about becoming a Humanist Celebrant so I could officiate at their wedding. I had assumed in my daydream that they would be living somewhere in the United States. I was also assuming just at that moment that they had already made arrangements for their wedding, so I was only mentioning the fantasy as part of expressing my happiness for them.

Well, me and my big mouth.

They immediately and excitedly answered back that they’d be honored to have me officiate at their wedding, and that they would love it if there was any way I could get myself to Metz, France where they were currently living.

Metz, France. I live in California.

It was an idea just whimsical and crazy enough to suddenly be intriguing instead of merely a daydream to dismiss. I thought about how, lately, I’d been paying more attention to people who say that as we get older, we don’t regret the things we did as much as the things we didn’t do. This would definitely be something I would regret not doing, so… about 90 mind-racing seconds after they asked, I said I’d do it.

In France, all marriages are done in a civil ceremony at the local city hall first, and then anyone can officiate a couple’s personal ceremony as they choose, religious or otherwise. Still, even though it was not required, I wanted to have some kind of “official” capacity while performing the ceremony, so the next day I applied to the the Humanist Society for their endorsement as a Humanist Celebrant. I did a lot of reading about Humanism, wrote long, carefully-considered answers to their questions, and submitted my application. Then I quickly started making the travel arrangements. After two weeks, I was granted the endorsement.

Working back and forth with my friends online, we wrote a homily for me to read and vows for them to say, revising it several times so it reflected their values and views. Dan is a former adjunct professor who teaches philosophy via live online classes from his adopted home in France. He is also our neighbor here at Patheos with his excellent blog Camels With Hammers. Lex is a professional French and English translator. They’re very smart, philosophical people, and they’re capable of not just passionate, but also deeply thoughtful love. What they had to say to each other and their friends was beautiful, intelligent, and romantic. 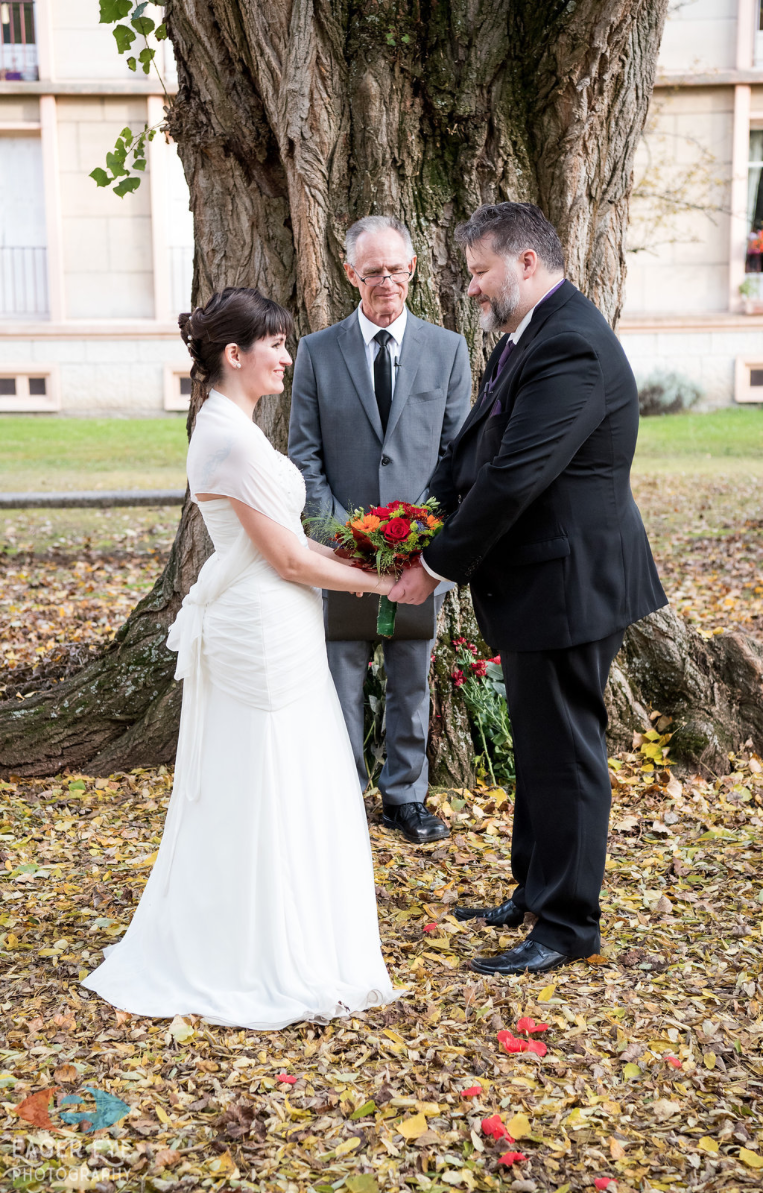 The whole place was romantic. The whole experience was romantic. Metz is a postcard-perfect ancient town with narrow, winding streets, intriguing shops, amazing restaurants, and oh-you-gotta-be-kidding picturesque vistas. The weather, which had been cold and cloudy for days, was sunny and mild on the big day. The wedding party led by Dan and Lex in tuxedo and gown walked through town to the city hall to the applause of hundreds of passers-by. We crossed the Moselle River on a medieval stone bridge flanked by a flotilla of a dozen white swans accompanying us. (No, really, they did.) The romance was unrelenting. The civil ceremony was elegant, and as the French are so good at doing, both formal and, guess what, romantic. Later, back at their home for the Humanist ceremony in a courtyard under enormous trees, we had raked the golden autumn leaves into an “aisle” for the bride and groom to walk down. That was Dan’s romantic idea. While I recited the do-you’s and they traded lovely and earnest promises, a just-right fluttering of a few more golden leaves drifted down around us. I remember thinking that if this were a movie, the director might decide that the drifting leaves thing was too over-the-top, but this was real.

There were plenty of atheists there, but no dreary cynicism to be found. 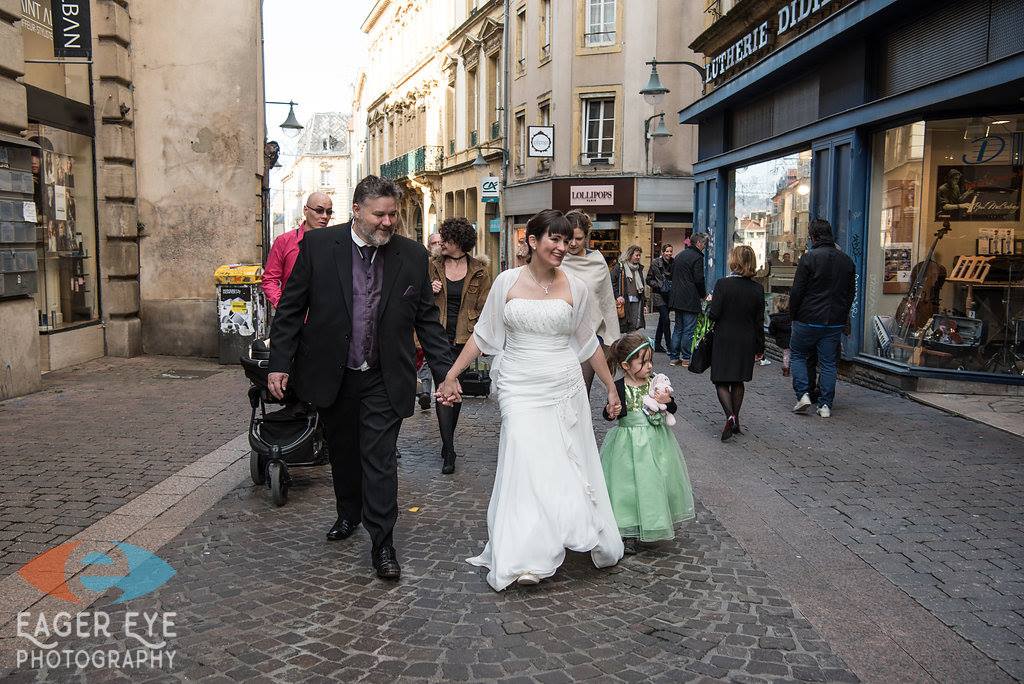 In the ensuing year, Dan and Lex have continued to build upon what I can only describe as an extraordinary love. Their first child together will be arriving in just a few weeks. I’m honored and humbled by their trust in me to play a small part initiating their life together. I’m lucky in many ways that I was able to have this brief adventure that I’ll never forget, and the spur-of-the-moment whimsy of doing it was, please forgive me for saying it, very romantic.

You can see it for yourself in the excellent video below which was taken on the day of the wedding:

(Images via Eager Eye Photography. Video via Ever After)

December 11, 2017
Christian Leader: Unlike Atheists, I Don't Want to See Kids Drinking and Driving
Next Post

December 12, 2017 Michael Brown: There Are "Pragmatic and Moral Reasons" to Vote for Roy Moore
Browse Our Archives
What Are Your Thoughts?leave a comment