A self-proclaimed “pastor” recently walked into a store in Alaska, where kids and parents were waiting to take pictures with Santa, and yelled to the crowd that Santa didn’t really exist, their parents put the presents under the trees, and Jesus Christ was the real reason for the season.

This isn’t even the first time “Pastor” David Grisham Jr. has done this. (I put that word in quotation marks because, while he uses the word to describe himself, he doesn’t seem to have any kind of congregation.) He did the same thing last year at a mall in Texas. And in 2010, with his group Repent Amarillo, he published a video of Santa getting shot by a firing squad.

The man is full of Christmas cheer.

In the video above, maybe the least self-aware line is when he says to the crowd, “… He’s not real. It’s just fake. Your parents have been telling you a story that is not true!” (Oh, the irony…)

I suppose the best thing about the video is that no one really seems to be paying attention to him. There are no crying children or angry parents. Just a bunch of people annoyed by the loud preacher whose only goal seems to be to ruin everyone’s day.

His rant doesn’t even make sense. Grisham is telling parents to substitute one myth for another, and he’s sending a message to children that they shouldn’t trust adults who tell them these stories. I could understand a Christian complaining about the commercialization of the holiday, but in some ways, getting kids excited about Christmas is a perfect opening to talk about Jesus. Their belief in Santa will eventually disappear on its own, and the hope is that their faith in Jesus will remain. You don’t have to kick Santa out of the picture prematurely to get there. Grisham’s idiotic publicity stunt, then, is a self-inflicted wound. Why would anyone want to join whatever club that jerk is a part of?

Grisham is like a guy who stands outside a movie theater and spoils the film for everyone wanting to see it. That doesn’t make them sympathize with his passion; it makes them want nothing to do with him. Ever.

(Side note: Grisham’s Facebook page is full of other compassionate nuggets like, “If an actress is willing to be a WHORE by appearing nude, she has little room to proclaim sexual harassment.” He just oozes the love of Christ, doesn’t he?)

(Thanks to Dana for the link. Portions of this article were published earlier) 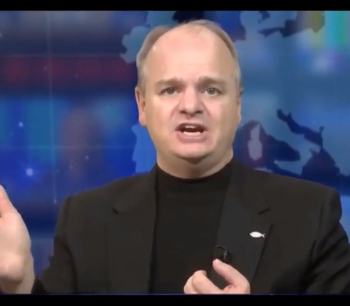 December 4, 2017 Gordon Klingenschmitt: Moderate Muslims Are Non-Violent Thanks to Christianity
"I kinda like wearing masks. They have pretty ones. I think my favorite is leopard ..."
Kaia Rose Bitter Christian Activist: Joe Biden and ..."
"I suppose "One Million Moms" sounds a lot better than "One Angry Karen"."
Akira625 The Real Story of “One Million ..."
"This popped up on my YouTube feed. It's hilarious. And sad at the same time. ..."
guerillasurgeon The Real Story of “One Million ..."
"Apparently, Jill was not already a Christian."
Synfandel Lawsuit: An Oklahoma School Let Christian Missionaries ..."
Browse Our Archives
What Are Your Thoughts?leave a comment