Writing for The Federalist, Tully Borland makes what he believes to be a compelling case for why Alabamians should vote for Roy Moore, the disgraced judge. It’s so compelling, it can be summarized in a single word:

It’s all about abortion. 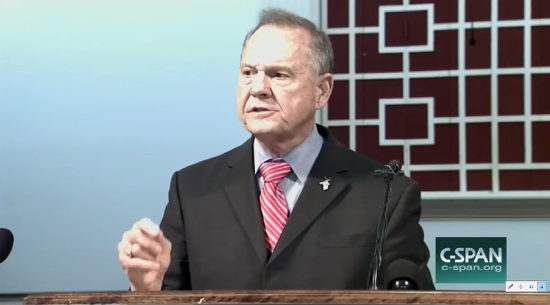 And he really wants you to know that he has a 14-year-old daughter, too, so he is appalled — appalled! — at the allegations against Moore, even though he doubts they are true.

Before getting to the “meat” of his argument, Borland makes a weak case in favor of grown men marrying teenagers, claiming it used to be “normal.”  Borland fails to take into account the historic fact that life expectancy was shorter several decades ago. Today, a couple that marries late in their twenties can still produce a large family, although I suppose that depends on your definition of “large.” For most Americans, large is probably four or more kids. Maybe Borland is thinking more about Duggar-sized families, in which case, girls should be married off as soon as they start menstruating.

Borland goes on to discredit the assault allegations against Moore, but writes the rest of his article under the assumption that they are true. If so, he says, Moore still deserves your vote, because Democratic opponent Doug Jones is even more of a moral monster:

Jones has gone on record that not only does he support abortion, but he supports unrestricted abortion, even opposing a ban on abortion after 20 weeks. This is morally equivalent to supporting infanticide.

No. It’s not. No woman waits until halfway through her pregnancy before deciding she no longer wants to be a mother. 20-week abortions only take place when the mother’s life is at risk — and even then, they’re hard to obtain. Moore seems to think that with a pro-choice politician in charge, abortions will be taking place on every street corner. In truth, electing Jones could lower abortion rates, because pro-choice candidates are more inclined to support policies and procedures that work to prevent unwanted pregnancies in the first place: comprehensive sex ed and affordable contraceptives, for example.

In my mind, Jones’ position is so extreme that a vote for him is a vote for the greater of two evils by a wide margin. It’s hard to imagine much worse than the mass murder of innocents. That’s also not taking into consideration his many other views with which conservatives disagree.

I’m confused by this reasoning. Borland, a professor at a Baptist university, presumably doesn’t subscribe to the Catholic practice of categorizing sin. To Catholics, “Venial” sins, like lying, are nothing like “mortal sins,” which include murder. In Borland’s tradition, all sins are equal in the eyes of God. So what makes abortion worse than inflicting sexual trauma on teenagers?

But Borland saves his most ridiculous argument for last:

Furthermore, there is no reason to think that Moore, as an old, married man, is still trying to have sex with teens. All the accusations target his early thirties before he was married.

I hate to break it to Borland, but the recidivism rate of pedophiles is high, while the rate of redemption for them is quite low. Men like Moore are predators, and they don’t stop because they are married. All this means is that new victims have yet to speak out. 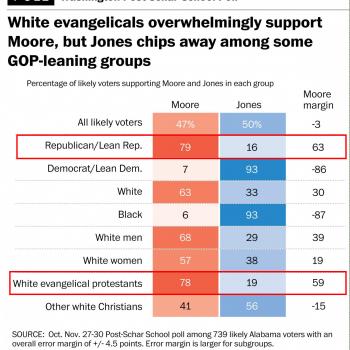