For more than a year now, it’s been a guessing game for a lot of Ark Encounter’s critics as to what the attendance really is over there.

Anecdotally, when atheists visit (on weekdays or not during the summer), we’ve heard reports that things are relatively empty. When Ken Ham brags about attendance numbers (on weekends and holidays, especially over the summer), he doesn’t give specifics but always acts as if the crowds are overflowing. It’s possible both groups are telling the truth.

We finally got a hint this past August about actual numbers and it was all thanks to a new ordinance passed by the city of Williamstown, Kentucky.

You may recall that officials called for all ticket-taking attractions in the city to pay a surcharge of $0.50 per ticket as a “Safety Fee” to help pay for fire trucks, police cars, etc. — the very things that make the city a safer place for residents and tourists. While there are two other attractions the fee applies to, Ark Encounter would be the lion’s share of the income, and even if Ken Ham wanted to keep his attendance numbers secret, the city’s Safety Fee amounts were a matter of public record.

That’s why Ham admitted (or bragged, depending on your perspective) in August that he had paid Williamstown more than $70,000 to cover the Safety Fee for the month of July.

Dan Phelps, President of the Kentucky Paleontological Society, has long been a watchdog of all things Ark Encounter, and he recently asked for those Safety Fee public records. This morning, he received a response, giving him the official attendance numbers for Ark Encounter for July, August, September, and October of this year:

So what do those numbers tell us?

2) The attendance figures were solid in the summer and then took a dive when the school year began. I suspect it will continue to go down as the weather gets colder (even in Kentucky) and the school year progresses. I also suspect the numbers are higher now than they will be in the future because after you’ve seen the Ark once, there’s really no need to see it again.

3) Ken Ham once again seems to be overestimating attendance for the coming year.

Just last week, he wrote in a piece for the Courier-Journal that he expected “1.4 million to 2.2 million” visitors over the second year of the Ark’s existence:

… Now that we are in year two, the Ark predicts that since last year was not a “typical” year (e.g., we did not experience a full complement of motor coach tour buses, which has now exploded), 2017-2018 will exceed our first-year numbers and be within the 1.4 million to 2.2 million range estimated by ARG.

To hit 1.4 million, he’s assuming an average of about 117,000 visitors a month. It’s not surprising that he beat that in July, the peak of summer, but he’s not even close in the other months. Can he really make up for the less tourist-y times of the year by hauling in everyone and their Quiverfull families over the traditional vacation months? I have my doubts.

Also keep in mind that Ham once estimated first-year attendance to be over two million. He then continued to lower it until he could claim success.

4) Even if Ham boasts about the attendance, the tourism hasn’t led to a business boom in Williamstown. Remember: Ham has blamed the city for not doing more to draw in people. He never looks in the mirror to realize that all the tax breaks and perks he demanded in exchange for building his Ark there have hurt the city.

Either way, it’s good to have actual numbers to use as a benchmark for the future. Many thanks to Dan for his dogged pursuit of this information. 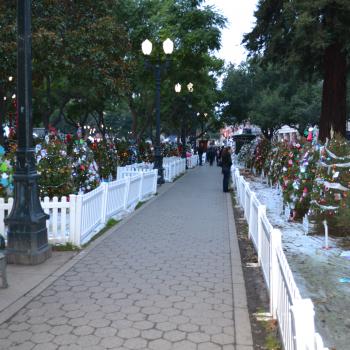 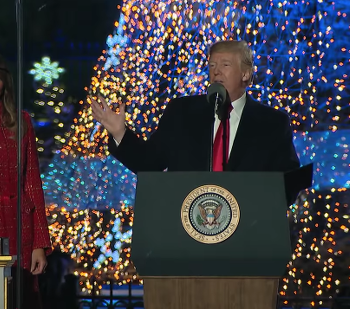 December 1, 2017 Donald Trump Screwed Up Christianity 101 at the Tree Lighting Ceremony
Browse Our Archives
What Are Your Thoughts?leave a comment