Donald Trump Screwed Up Christianity 101 at the Tree Lighting Ceremony

I know all the Donald Trump news today revolves around Mike Flynn, but let’s step back a bit to talk about last night’s lighting of the National Christmas Tree since Trump found a way to mess that up. Just like everything else he does. 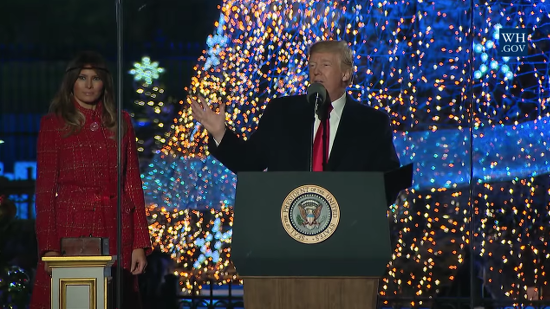 Whatever our beliefs, we know that the birth of Jesus Christ and the story of this incredible life forever changed the course of human history.

Yes, we all have different religious beliefs, but we’re all united in our acceptance of Jesus Christ as our Lord and Savior.

That’s some incredible Christian privilege for you.

2) Trump acted like he was bringing “Merry Christmas” back to the country.

Now as the president of the United States, it’s my tremendous honor to finally wish America and the world a very Merry Christmas.

“Merry Christmas” never left. Trump didn’t restore it. President Obama said it every year. But when the president lies about everything and his gullible evangelical base believes everything he tells them, no wonder this anti-Obama attack lives on.

3) Trump suggested Joseph was the father of Jesus.

The Christmas story begins 2,000 years ago with a mother, a father, their baby son, and the most extraordinary gift of all, the gift of God’s love for all of humanity.

Once again, Trump fails to understand the most foundational story of Christianity. Joseph and Mary didn’t procreate. Mary — the “virgin” Mary — was impregnated by God. That’s why Jesus is literally called the “son of God.”

Just because Nativity scenes include a statue of Joseph doesn’t mean he was the father any more than the appearance of three men with gifts.

But what else would you expect from a guy who, when asked if he was “an Old Testament guy or a New Testament guy,” responded “probably equal.” The Evangelical’s Great White Hope doesn’t know that the whole basis of Christianity, in theory anyway, is found in the life of Jesus as told in the New Testament.

December 1, 2017
Here Are Ark Encounter's Attendance Numbers for the Past Several Months
Next Post

December 1, 2017 The Federalist: It's Okay to Vote for a Child Molester If He's Not a Democrat
Browse Our Archives
What Are Your Thoughts?leave a comment