This is an article by American Atheists President David Silverman. It appears in the current issue of American Atheist magazine, which is sold at Barnes & Noble, Book World, and Books-A-Million bookstores in the United States and at Chapters/Indigo bookstores in Canada. To find a store near you or to subscribe, go to atheists.org/magazine. 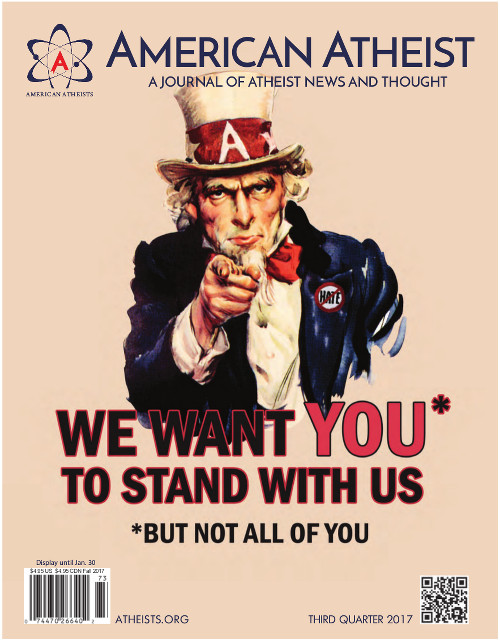 As an organization, we embrace the broadest definition of “atheist,” which is someone who a lacks a belief in a deity, be it Thor, Zeus, Ganesh, Yahweh, Jesus, Mohammad, or any of the other thousands of gods that have been imagined for as long as people have been around. Atheists are the most maligned and underrepresented demographic in the country, so we must speak up in order to be counted. Our tent is a big one because atheists come from everywhere, and we need help from every kind of atheist: Democrats and Republicans, Libertarians and Socialists, conservatives and liberals, firebrands and diplomats. Reasonable people can have reasonable disagreements about reasonable topics. That’s what it means to be an American.

Today, we are living in a nation and world very different from just a year ago.

Because of this, American Atheists is obliged to say, in no uncertain terms, that we will not tolerate intolerance — from neither our neighbors nor our government.

The current tolerance for bigotry is what emboldened white nationalists and neo-Nazis to rally in Charlottesville in August. Their views are reprehensible, their actions are abhorrent, and they have no place in our civil society. American Atheists stands in complete solidarity with the targets of this hatred.

The current tolerance for bigotry is what emboldened the Trump Administration to suspend the Deferred Action of Childhood Arrivals (DACA) policy. There is no question that DACA has improved the lives of more than 800,000 men and women who were brought to this country as children. Our nation is made stronger by immigrants — many of whom came to the U.S. because of our commitment to religious freedom and government neutrality.

The current tolerance for bigotry is what spurred our president to sign a memo directing the Pentagon to ban transgender recruits and enlistments. By doing so, he is putting into question the status of transgender members of the military already serving openly and bravely. Expelling these dedicated American troops, which number in the thousands, is nothing more than a cruel and disgusting scheme to use them as a political football.

While our organization needs all the help we can get, we don’t want it from all atheists. Calling yourself an atheist doesn’t automatically make you a member of our community. It just means we happen to share one thing in common. And that one thing isn’t good enough. We must own the fact that some atheists can be bad people. It takes more than the lack of a belief in God to be a reasonable person.

We have far more in common with Christians, Jews, Muslims, and Hindus who strive for equality than we have with any atheist who advocates hatred. An atheist who sides with religious bigots against the cause of equality is no friend of ours. We must keep our tent as large as possible, but we will not include anyone who embraces bigotry or merely turns a blind eye to it.

This is a fight for the character of our nation, and while we hope all reasonable people agree, simply hoping isn’t enough. As atheists, we know that the only way to conquer evil is by human action — by speaking out forcefully and confronting bigotry and inequality whenever we see it. And, most of all, by standing shoulder-to-shoulder with the targets of this bigotry, no matter the cost. 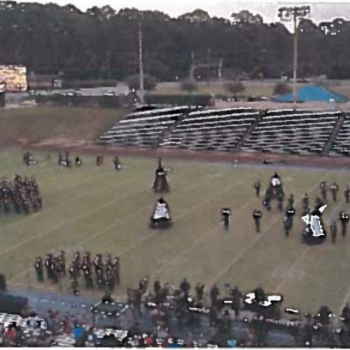 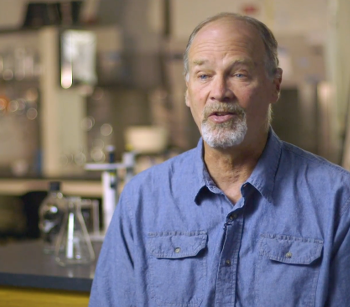 November 21, 2017 Science Is Still Under Attack in the Public Schools
Browse Our Archives
What Are Your Thoughts?leave a comment