Bob Katter, a Christian fundamentalist and anti-LGBT politician in Australia, has an interesting reason for not supporting same-sex marriage rights: he has to focus on deadly crocodile attacks.

Prime Minister Malcolm Turnbull vowed to enact marriage equality after the national mail-in survey in which 62 percent of Australians said they supported it, but Katter chose to take another path: one of distraction and awkward deflection.

At a press conference, Katter implied the entire country should be put on hold until the crocodile death epidemic (which doesn’t exist) is solved.

“I mean, you know, people are entitled to their sexual proclivities. Let there be a thousand blossoms bloom, as far as I am concerned,” he said, laughing.

But then his tone changed, dramatically, and he became much more serious.

“But I ain’t spending any time on it because in the meantime, every three months, a person is torn to pieces by a crocodile in north Queensland.”

Who has time for equality when crocodile deaths are so prolific, right? And then, of course, we have to find a way to shield ourselves from all the Sharknados.

If this allegation about crocodiles were true, it would certainly be alarming (though still not a reason to vote against gay marriage). But it’s not true, because there have only been 11 fatal crocodile attacks in Queensland since 1985, according to data provided by the Australian Department of Environment and Heritage Protection.

The crocodile epidemic might not be real, but Katter didn’t just pull the idea out of nowhere. He has campaigned for a crocodile cull in northern Queensland for years and criticized politicians whom he says “don’t understand” the problem.

In one instance, he attacked other politicians’ ignorance on the matter… while using a photo of a crocodile only found in Africa.

Katter slammed city politicians “making decisions about issues they don’t understand”, referring to their calls for crocodile culling in Queensland.

“We reckon they’d learn pretty fast about crocs if we put a heap of them in Brisbane’s Breaky Creek,” he added.

Katter is a member of the Australian House of Representatives with a history of saying ridiculous things, often at the expense of members of the LGBT community. He actually said in August that homosexuals stole the word “gay,” which used to be “the most beautiful word in the English language,” according to the BBC.

In explaining his position, Mr Katter quoted part of Alexander Pope’s 18th Century poem The Rape of the Lock — “Belinda smiled, and all the world was gay” — and said he now felt a “beautiful image” had been “taken”.

Katter’s video went viral, but not in a good way. People around the world thought his position was ridiculous and, as we saw in Australia’s recent postal survey, the people of his country think he’s wrong, too. 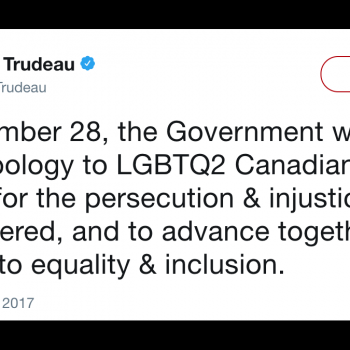 November 20, 2017
The Canadian Government Will Formally Apologize to Persecuted LGBTQ People
Next Post

November 20, 2017 Pastor Supporting Roy Moore: His Accusers Must Be Getting Paid "a Healthy Sum"
Browse Our Archives
What Are Your Thoughts?leave a comment