This Is What the Q&A Session at a Flat Earth Conference Looks Like November 13, 2017 Hemant Mehta

Over the weekend, all of you missed the Flat Earth International Conference, which brought together delusional fools from all over the globe.

A quick glance at the schedule shows sessions about why NASA is tricking you, what the Bible has to say about all this, and why the scientific method fails. But one session involved a simple Q&A with YouTuber Mark Sargent, whose cheap videos promote the conspiracy theory.

Video of his session is online, so I watched the whole damn thing. And Christ, my head hurts. Here’s a glimpse at what was asked and how he answered:

12:20: Sargent responds to a question about what they need to do to get the Flat Earth theory in public schools:

Science is gonna have to address this, plain and simple. They cannot dodge us forever.

21:18: Sargent talks about the spiritual implications of Flat Eartherism:

Try to be an atheist and be [into] Flat Earth. It cannot be done. I have yet to find an atheist that believes in any version of this [flat] model.

I’ve never been so proud to be godless.

26:34: What about all those NASA pictures from space?

[NASA] had a 60 year head start trying to lock this thing down and we’ve undid most of it in, what, two years?… So we’re getting there! We’re — a play on words — way ahead of the curve.

29:30: In response to a question about who is behind the “globalist” lie, Sargent says it’s not a lot of people in the government. Just a few.

We’re talking about a very very small group of people. And no, I don’t necessarily want to get into naming… but it is a small scary group of smoking men sitting around a long table.

31:10: Someone asks about Elon Musk, who wants to explore Mars. Will he hit the “dome” or just “hug the edge” of the Earth?

I don’t care about Sargent’s response. The question alone is absurd.

47:00: Sargent reads a letter from an elderly fan with a success story:

… I asked the two older [kids] — the 6th and 7th graders — if the Flat Earth ever comes up in school. The same thing happened in each of their classes. They were both so excited to tell me that when their science teacher was telling the kids the Earth spins at 1,000 miles an hour and goes around the Sun, that the class erupted with abut a third of the class saying, “No, it doesn’t!”

That resulted in huge cheers from the crowd.

This conference really happened. People paid up to $249 apiece to celebrate their ignorance. And they were even willing to show their faces on camera. 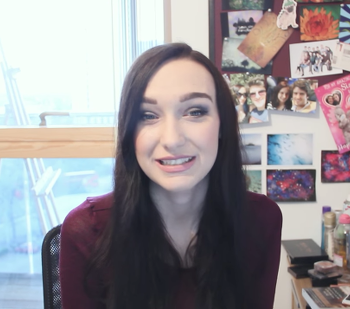 November 12, 2017
This is Excellent Advice for Coming Out as an Atheist
Next Post

November 13, 2017 37% of Evangelicals Are More Likely to Back Roy Moore After Assault Allegations
Browse Our Archives
What Are Your Thoughts?leave a comment