Kathleen Hartnett White, nominated by Donald Trump last month to be the top environmental advisor in the White House, just revealed a glaring problem with her résumé: She doesn’t understand basic scientific facts. Like how water expands when warmed.

White is the most recent in a series of Trump appointments who are completely unqualified for the job (Rick Perry at the Department of Energy, for example), a pattern that has made many question whether Trump is intentionally trying to destroy the government. It almost seems like Trump looks at qualified candidates, then chooses their polar opposites just to mess with everyone.

As part of her nomination process, White was questioned by Sen. Sheldon Whitehouse, who asked her some elementary science questions almost anyone should know. White did not. Whitehouse was clearly disappointed, saying she “outright rejects basic science.”

Whitehouse first asked if she understood to what extent oceans trap heat, a key component of climate change, and she said she didn’t know.

He asked if it was more or less than 50 percent of heat trapped in the atmosphere that is stored in the oceans. (Spoiler: it’s about 90 percent.)

She seemed utterly clueless. All she said was that she had “read about that” but she knew it was contested. (Spoiler: It’s not.)

“But I believe there are difference of opinions on that — that there’s not one right answer,” she said.

Whitehouse prodded her again, asking if there were “serious” scientific differences of opinion on whether the number is higher or lower than 50 percent.

(Spoiler: She is mistaken.)

Whitehouse then went even more basic, asking her if water expanded when heated.

“Does the law of thermal expansion apply to sea water?” he asked.

“Again, I do not have any type of expertise or even much layman study of the ocean dynamics,” she responded.

This is exactly the point. She’s not an expert on the environment, or even a scientist, yet she has been nominated for a position that requires one or both to be effective. She is supremely unqualified. Or worse: she is lying and turning environmental science into a political shell game.

That notion has been raised by some, including the Washington Post‘s Philip Bump:

The answer goes back to our point at the outset. Hartnett White was probably nominated to run the CEQ because she’s willing to brush aside the scientific consensus on climate change, not in spite of it. If that means that an awkward video trickles out over social media for one day, so be it.

This is a huge deal and something that can’t (or shouldn’t) just be tossed aside. This is a position that holds a lot of responsibility over our environment, and it deserves to be taken seriously. My only hope is that enough Republicans agree so she won’t be confirmed and do any more damage to this already suffering planet.

I’m not holding my breath.

November 11, 2017
One Louisiana School District is Guilty of Even More Constitutional Violations
Next Post 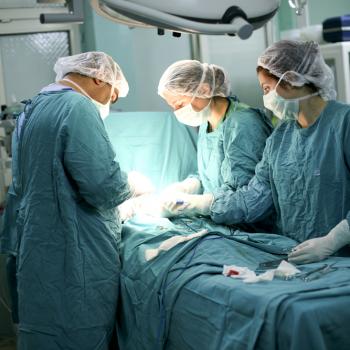