Christian Pastor: People Are Atheists Because “Something Traumatic Happened”

I swear it was just a week ago when we criticized Harvest Christian Fellowship Pastor Greg Laurie for telling his congregation “there’s no such thing” as an atheist relief organization. That wasn’t just false. It was malicious since there are many atheist groups that do relief work. Just because the infrastructure isn’t as well-developed as you’ll find in some churches doesn’t mean it doesn’t exist at all.

To suggests godless people don’t do anything nice for strangers just perpetuates the nasty anti-atheist stereotypes many Christians have of us. 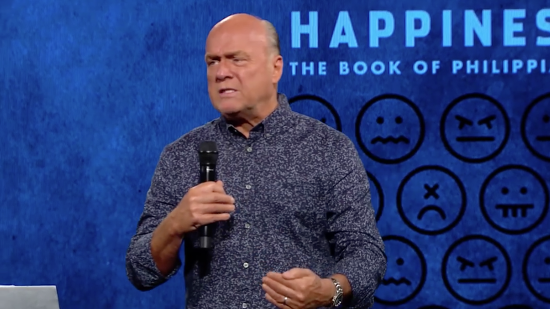 Laurie hasn’t learned a damn thing since he gave that sermon. Or at least he hasn’t tried to fix the problem in articles going out under his name.

In an article for the Christian Post, adapted from an older blog post made in September, Laurie attempts to explain why so many awful things, like natural disasters and mass shootings, are happening. Why isn’t God doing something about it? He offers his typical Christian apologist take on everything, but in the middle of all that is this tangential insult.

Some people who claim to be atheists say they have come to this conclusion after careful study. There may be a few examples of that, but I’ve found that people generally end up as atheists because something traumatic happened to them.

Thus, they had to find a belief system, or lack thereof, that would help them deal with the pain they’ve had to face.

That’s just plain insulting. Laurie’s suggesting that we didn’t put serious thought into religion, that we didn’t read the Bible or examine Christian apologetics, that we hate God instead of finally accepting that He doesn’t exist.

I didn’t become an atheist because I was traumatized. I shed my faith because I finally had the courage to ask tough questions about my faith, and I realized that the answers pointing to a godless world made far more sense than the religious rationalizations I was always taught.

His caveat is irrelevant. He’s assuming most atheists stop believing in God because something bad happened in their lives. This is just more proof that a man who spends a lot of time talking about atheists hasn’t done a damn bit of research. He just assumes he knows everything and runs his mouth.

He should be embarrassed. He ought to apologize. But of course he won’t. He’s too busy worshiping at the altar of straw men.