Jeff Hoover, a Republican state representative for Kentucky, resigned his post as Speaker of the House on Sunday after it was reported that he settled sexual harassment allegations with a staffer. He then said he asked for, and allegedly received, God’s forgiveness. 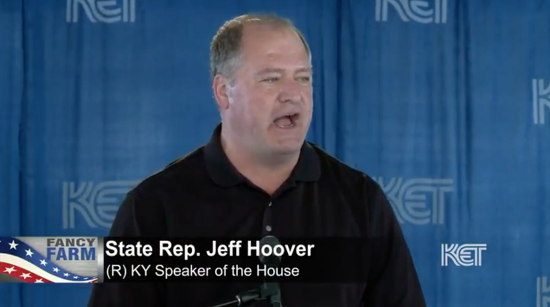 Hoover said he’ll resign his leadership position but continue as a state representative. He said he didn’t sexually harass his employee, but the Associated Press reports that he did engage in “banter that was consensual.”

Hoover’s wife and two of his three daughters were in the room as he spoke.

“I engaged in banter that was consensual but make no mistake it was wrong on my part to do that. And for that, I am truly sorry,” Hoover said. “I want to reiterate that at no time, at no time did I engage in unwelcome or unwanted conduct of any kind.”

Hoover’s announcement came just one day after Kentucky Gov. Matt Bevin called for “the immediate resignation” of anyone who has settled a sexual harassment case.

Hoover said he settled the sexual harassment allegations to avoid further litigation, and that none of the parties admitted any wrongdoing (that’s traditionally how these settlements work to avoid any liability). He “absolutely and expressly denied that any sexual harassment had taken place,” according to the Courier Journal, which broke the story last week.

Hoover said that on Oct. 17 he received a letter from an attorney on behalf of a client making allegations against him and others for sexual harassment. “The letter was not a demand letter in a sense of demanding a sum of money. It requested that we negotiate a resolution instead of litigating the allegations.”

Hoover said all parties agreed to keep the agreement confidential, “which was important to both sides in the effort to move forward in the employment relationship.”

Again, this is exactly how sexual harassment settlements work. They are typically anonymous and include non-disclosure agreements keeping the parties from discussing particulars. Then the accuser accepts a payment in exchange for not litigating the claims in court, which can be an enticing incentive for someone who doesn’t want his or her name dragged through the mud.

Hoover also tried to play the victim card, saying “To say the past few weeks and especially the past four days have been trying and difficult for me and my family would be an understatement.”

Most interestingly, Hoover, who is, of course, a devout Christian, said God has forgiven him for his trespasses.

Hoover said, “I have asked for and received forgiveness from God, my family. My wonderful wife Karen and my daughters have forgiven me for my actions, and I have their unwavering support. Today I ask the people of the commonwealth to forgive me for my actions. I am truly sorry.”

I would love to know how that conversation went.

Did he speak with God directly? This seems more like a convenient Get Out of Jail Free card than anything else. After all, if God has forgiven him, who are we to judge him for his transgressions?