A Christian magazine publisher Wednesday cited the firing of Anthony Scaramucci, who was dropped from his post at the White House after only 10 days, as evidence that Donald Trump’s alleged Christian faith is deepening.

In reality, of course, the firing of “the Mooch” was a tactical decision based on optics, as most of Trump’s major decisions seem to be (I guess that’s what you get when you elect a reality TV star to the presidency). Scaramucci launched a tirade against fellow Republicans, criticizing Reince Priebus and Steve Bannon, making the White House look chaotic.

Still, Charisma Magazine publisher Steve Strang insists that Trump’s Christian faith is actually growing and that the firing of his former communications director is hard evidence. He made the statement on televangelist Jim Bakker’s show, according to Right Wing Watch.

Strang also pointed to the firing of Scaramucci in the wake of a vulgar rant he unloaded on a New Yorker reporter as further evidence of Trump’s deepening faith, asserting that Scaramucci’s termination was a sign that Trump “didn’t want his key people talking like that in public.”

To debunk Strang’s theory about faith, all we have to do is look at the actions of Trump himself. We can look at Twitter and see him still mercilessly attacking everyone from the candidate he beat in 2016 to fellow Republicans. We can see him effectively putting the lives of millions at risk by threatening nuclear warfare, emboldening white supremacists, and generally doing the opposite of what Jesus would do.

Of course, I think most Christians know Trump isn’t really a Christian. Not a devout one, anyway. He has rarely attended church in his life, and he knows almost nothing about his own declared religion. I think even Strang knows this about Trump, because he admitted there are some things in the president’s life “that we don’t approve of.”

“… you don’t hear those things in the last 10 years and his language has improved,” Strang told Bakker on his show.

So… everything since the time the Access Hollywood video was taped.

Trump is the President, so of course his “language has improved” slightly in that he has people surrounding him and filtering him. But it hasn’t improved all that much. He still attacks people every day, calling them dumb and crazy and psycho. He still mocks everyone who disagrees with him. It is clear that his ethics haven’t evolved, and that his “Christianity” never really existed in the first place.

Perhaps Strang’s stance has something to do with the fact that he’s hawking a book called God and Donald Trump. We may never know his motivations, but we do know one thing: Trump isn’t someone who takes “What Would Jesus Do?” into consideration before doing anything. 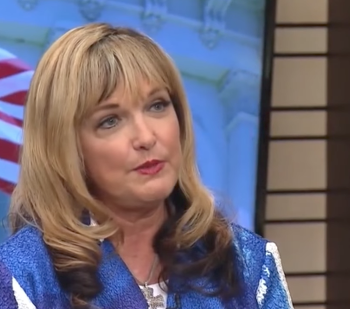 November 4, 2017 Christian Preacher: When Donald Trump Swears, He's Just Acting Like Jesus
Browse Our Archives
What Are Your Thoughts?leave a comment