The just-released tax reform bill put forth by House Republicans includes a section that would formally undo the Johnson Amendment, which prohibits pastors from endorsing candidates from the pulpit.

The Amendment, which went into effect in 1954, is seen by religious conservatives as an unfair restriction on their free speech rights — even though it applies to all 501(c)(3) non-profit groups and not just religious organizations.

Donald Trump made it a campaign issue to repeal that rule, and he signed an executive order earlier this year demanding the IRS look the other way if pastors were accused of telling their congregations how to vote — but his order didn’t really have teeth to it. If this “tax reform” bill passes, however, churches could essentially become “political dark money shops.”

Here’s what the actual bill says on page 427 (out of 429) in a section about tax-exempt organizations.

(a) IN GENERAL. — Section 501 is amended by adding at the end the following new subsection:

”(1) IN GENERAL. — For purposes of subsection (c)(3) and sections 170(c)(2), 2055, 2106, 2522, and 4955, an organization described in section 508(c)(1)(A) shall not fail to be treated as organized and operated exclusively for a religious purpose, nor shall it be deemed to have participated in, or intervened in any political campaign on behalf of (or in opposition to) any candidate for public office, solely because of the content of any homily, sermon, teaching, dialectic, or other presentation made during religious services or gatherings, but only if the preparation and presentation of such content —

”(A) is in the ordinary course of the organization’s regular and customary activities in carrying out its exempt purpose, and

”(B) results in the organization incurring not more than de minimis incremental expenses.”.

(b) EFFECTIVE DATE.—The amendments made by this section shall apply to taxable years ending after the date of the enactment of this Act.

To put that in English, this would allow any group with a “religious purpose” — a church or religious non-profit — to get the same tax exemption as always even if its leader promotes a candidate while on the job. (The rule doesn’t apply if the endorsement results in the church taking in a lot of money, presumably to avoid any further improprieties.)

In theory, though, here’s what could happen: A wealthy member of the congregation could threaten to withhold money from the church unless the pastor endorses a particular candidate from the pulpit because that candidate is seen as sufficiently anti-abortion or anti-gay. That would adhere to both rules about the pastor still promoting the church’s mission without the church taking in extra cash as a result of the endorsement.

Turning churches into branches of the Republican Party (since that’s almost certainly what would happen) is obviously a problem, but it’s not the only concern.

For one, the bill still gives religious groups preferential treatment. While a Christian church could endorse a candidate without losing its tax exemption, the Freedom From Religion Foundation (i.e. not a “religious” group) won’t get that same ability.

Remember: FFRF filed a lawsuit in May to block Trump’s executive order for similar reasons — and the wording there wasn’t nearly as explicit as this new bill is. (That lawsuit is still ongoing, but the Trump administration has urged the courts to dismiss the suit.)

Another problem is that thousands of religious leaders oppose this change. They don’t want their religious sanctuaries getting caught up in campaign politics. Passing this bill would ruin that.

I’ll post reactions from church/state separation groups as they come in.

***Update***: The Secular Coalition for America says passing this bill would allow churches to “potentially operate like Super PACs.”

“This is a brazen attack on the separation of church and state,” said Larry T. Decker, Executive Director of the Secular Coalition for America. “These Members of Congress are afraid to introduce a repeal of the Johnson Amendment as a stand alone bill because they know it would fail. Therefore, in an attempt to do the bidding of the religious right, they have hidden this provision inside of tax-reform legislation. Religious nonprofits are already exempt from taxes and financial transparency. The repeal of the Johnson Amendment would bestow churches with unprecedented power and exempt them from all accountability to the taxpayers and the parishioners who fill their coffers. Most Americans, including most religious leaders, do not want to see these common-sense protections repealed. If Congress won’t stand up for the First Amendment, we will.”

“I do not think that pastors or churches should seek to be apolitical, but I think the boundary of ALL non-profits being held to the standard of not supporting a specific candidate is reasonable,” said Pastor Chris Legg, the lead pastor at the South Spring Baptist Church in Tyler, Texas. “Being a nonprofit is not a right, but a privilege that appropriately comes with some restrictions and some accountability. I would go so far as to say that if a pastor believes God is calling them to speak openly in support of a candidate, or in opposition to one, they are obligated to follow God’s leadership and do so! Fortunately, our laws provide for a completely appropriate and legal way to do that — don’t be a 501(c)(3).”

“Of course we oppose any changes to the Johnson Amendment and I’m proud to stand with my brothers and sisters from the religious community who have expressed sincere concerns about the ramifications of such repeal,” said Decker. “It’s clear that the only supporters of this crusade against the Johnson Amendment are the fringe elements of the religious right who care less about spreading the word of God than they do imposing their beliefs on all Americans.”

Americans United for Separation of Church and State called the repeal of the Johnson Amendment bad for everyone involved, including churches.

“President Trump and House leadership are trying to change the tax code so they can pressure churches for endorsements. They very clearly want to use congregations as political tools for their own benefit. This flies in the face of the American promise of separation of church and state, and it’s blatantly unconstitutional. Every American should be paying attention to this reckless effort to erode one of our most important national principles.

“For more than six decades, the Johnson Amendment has protected houses of worship from exactly this kind of political pressure.

“This is bad policy. It’s bad for churches, and it’s bad for American taxpayers who will potentially see their money going to support partisan political operations being run out of church basements. This will further divide Americans in spaces that are specifically meant to bring them together.

“The vast majority of Americans support the Johnson Amendment and do not want our houses of worship to be torn apart by partisan campaign politics. In addition, 5,500 nonprofit agencies, more than 100 religious and denominational organizations and more than 4,200 faith leaders have spoken out in support of the current law.”

The Center For Inquiry called it a “brazen sop to the religious right“:

“Eliminating the Johnson Amendment for churches will enable religious organizations use their tax exempt donations to support election campaigns,” said Jason Lemieux, CFI’s Director of Government Affairs. “It is so transparently cynical, it would be hilarious if it weren’t so damaging to America’s secular democracy,” added Lemieux.

“It was a bad idea when the GOP sought to repeal the Johnson Amendment in whole,” said Nick Little, CFI’s Vice President and General Counsel, “but repealing it only for churches for the benefit of their allies in the religious right is an abysmally bad idea. This would effectively break churches out of the existing tax structure, setting up a new, privileged category only for them. This blatantly violates the Establishment Clause, and we will take every legal means available to prevent it.”

American Atheists says it plans to file a lawsuit if this bill is passed:

“They just can’t help themselves,” said Geoffrey T. Blackwell, staff attorney for American Atheists. “They’re not simply repealing the Johnson Amendment. They’re specifically exempting churches — and only churches — from the requirement, giving them even more special treatment on the basis of religious belief. The Equal Protection violation here couldn’t be more clear.”

“We will not sit idly by while Congress creates a massive loophole that would turn churches into unaccountable, tax-deductible Super PACs for billionaires to hijack our nation’s electoral system,” said David Silverman, president of American Atheists. “With no transparency, no disclosure, and even a tax break for donating, every church in America would become a political weapon.

“If this bill is signed with the Johnson Amendment exemption in place, we’ll have no choice but to sue,” added Silverman. 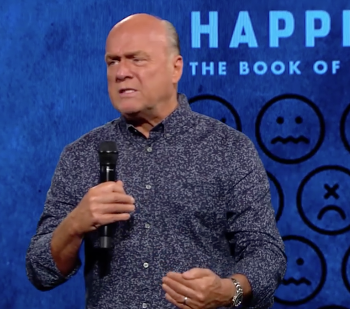 November 2, 2017
Pastor Greg Laurie: "There's No Such Thing" as an Atheist Relief Organization
Next Post 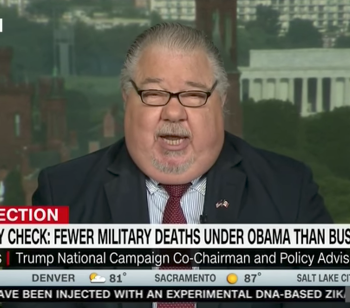