Christian Hate-Pastor: Veganism Is a “Substitute for Biblical Morality”

But he wants you to know that doesn’t mean you should treat people on those diets like crap… which is an unusual stance for him to take, since he routinely says the nastiest things imaginable about LGBTQ people.

If you think that the Bible promotes vegetarianism of any kind, you are severely lacking in biblical understanding.

If you’re gonna say [we should be vegetarian] because God wants us to, that’s a doctrine of devils… so if a vegetarian starts commanding me to abstain from me, that’s when I’m gonna say, “Hey, get thee behind me, Satan.”

I’ll tell you what this veganism is: It’s a substitute for biblical morality. It becomes “save the animals” morality. God doesn’t take care of our oxen, friend. He cares about us. We’re made in His image. Let the YouTube comments roll in, you bunch of vegans and vegetarians. Bring it on!

I can actually see the logic in saying God wants us to be kind, and that should apply to animals as well as our enemies, but apparently that’s demonic thinking.

I guess every time you slaughter a cow or chicken, an angel gets its wings.

October 27, 2017
After Vandalism, a Christian Monument is Going Back Up Outside the AR Capitol
Next Post 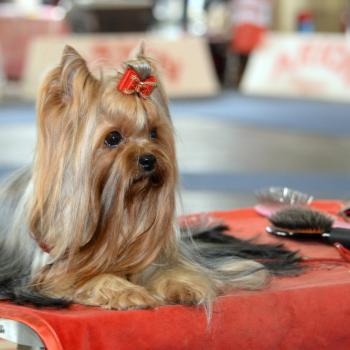