After Vandalism, a Christian Monument is Going Back Up Outside the AR Capitol October 27, 2017 Hemant Mehta

After Vandalism, a Christian Monument is Going Back Up Outside the AR Capitol

Over the summer, after a long battle, a Ten Commandments monument was installed outside the Arkansas State Capitol… which also meant the state was a step closer to being sued for promoting Christianity. The litigants were just waiting for the monument’s unveiling before they could act.

The monument was there because of State Senator Jason Rapert, who spent more than two years trying to make it a reality with the help of several government officials.

As soon as the Ten Commandments proposal began making its way through the House and Senate, atheists and Satanists applied to donate their own displays, but earlier this year, House members unanimously passed a bill giving them final approval over any proposals.

A Satanic Baphomet statue? Forget it.

In May, the Capitol Arts and Grounds Commission paved the way for the Christian monument’s installation, and the ACLU responded by saying a lawsuit was already in the works.

Rapert and his colleagues weren’t worried about that because they claimed the monument was identical to the one in front of the Texas State Capitol, which the Supreme Court said was okay. They didn’t understand, however, that the Texas monument was one of several displays erected to showcase the “ideals” of the state and never intended as a way to promote Christianity. Rapert’s monument, on the other hand, was always about promoting Christianity. Preventing the monuments of Satanic and atheist groups from going up only added to that theory.

If he wanted to look to the Supreme Court for precedent, he should have known that the Court said no to another Ten Commandments monument that had none of the broader context seen in Texas. That’s the one that most closely resembled what he was doing now.

The point is that this was always a huge mistake by Rapert. His monument was illegal. It promoted Christianity over all other beliefs and non-belief. Church/state separation groups were just waiting to pounce. And ultimately, taxpayers were going to be on the hook for the cash when the state lost the case, all because a man who took an oath to uphold the Constitution couldn’t be bothered to read and understand the First Amendment.

But all those plans went up in flames when, less than 24 hours after the monument’s unveiling, a self-described “born again Christian” and “Jesus Freak” named Michael Tate Reed drove his car into the display, completely destroying it.

To be sure, no one wanted that to happen. Certainly not church/state separation advocates. The Freedom From Religion Foundation even issued a statement that day saying, “There is no need to resort to criminal behavior to uphold the Constitution.”

If there was anything positive to come from that, it’s how Rapert was inadvertently given a reprieve from the lawsuits.

Too bad he’s not the type of person who learns his lesson after making a mistake.

He quickly began promoting a GoFundMe campaign to raise money for a new Ten Commandments monument. At the moment, he’s raised more than $81,000 (with a goal of $100,000).

All of that sets us up for the latest update to this ongoing saga: The new Christian monument is finally ready and it should be installed outside the State Capitol sometime over the next couple of weeks.

Sen. Jason Rapert, R-Bigelow, told Arkansas Online on Wednesday afternoon he received confirmation “about a day or two ago” that the latest iteration of the monument was finished.

“Obviously, we’re ready to go as soon as possible,” Rapert said of installing the new 6,000-pound, 6-foot-tall statue on state Capitol grounds. “My hope is for it to be up in a matter of weeks.”

Rapert said the last remaining step is for the Arkansas secretary of state’s office to sign off on the reinstallation.

This time, no one seems to be worried that the display will be destroyed, in part because Michael Tate Reed is currently in jail.

What Rapert didn’t mention in his comments, though, was that the moment this new monument is installed, the lawsuits will almost certainly be filed. Groups like the ACLU have just been waiting for the installation to occur.

But since the monument is now going up, let’s go back to the issue of how much it costs.

If the original monument was insured, then no money was needed for a replacement.

On top of all that, the producers of the God’s Not Dead franchise chipped in $25,000 of their own for a replacement after the monument was destroyed…

So why the GoFundMe page? Where is all that money going?

When I asked Rapert that question several months ago, all I got was a link to a website for the American History & Heritage Foundation, the non-profit group privately sponsoring the monument. Here’s what that group says about donations:

On June 27th, 2017, The 10 Commandments Monument was installed on the grounds of the Arkansas State Capitol using donations from those who gave to the American History and Heritage foundation. In addition to the funds raised for the monument, a donation was made to the Arkansas Secretary of State’s office for maintenance and upkeep for the monument.
​
In the early hours of June 28th, 2017, less than 24 hours after the monument had been erected, it was destroyed by a driver who decided to vandalize the monument. We are now raising funds to replace the monument and install additional barriers to protect it.

We have received calls from Americans across the nation to send us well wishes and support and we are grateful for their commitment to maintain America’s history and to preserve the belief that our nation is a nation of laws under God.

To support our efforts to re-build the monument, please consider making a donation here.

None of that explains why they need $100,000 for a monument that may very well have cost them $0.

When I asked Rapert the same questions last night, I got another link to that website… followed by a personal attack.

Rapert apparently didn’t like that I was questioning his motives. Here’s what he said to me:

Go play games somewhere else. I don’t have time for fishing expeditions. Choose to be a journalist or an activist — you aren’t very good at the journalist gig.

When you write be truthful or you will find out what real journalism can accomplish. Have a good night.

That last bit sounded like a threat from a government official to a blogger asking questions about how he’s spending money for a monument that already appears to be paid for.

When I told him the AHHF website he sent me only included “generic statements about donations, but no actual accounting of the money,” he responded with a link to the Kickstarter campaign I just concluded for Queer Disbelief along with three words: “Much like yours.”

Besides the fact that a private fundraising campaign for a book is very different that a politician fundraising for a religious monument outside the State Capitol, he’s suggesting something rather sinister about my intentions with the money. Which makes him look even worse than I suspected.

For what it’s worth, once our book is published and sent to donors, I’d be happy to have a conversation about our budget and where all the money went. (I’m keeping none of the Kickstarter funds, if that matters to anyone.)

It’s odd, though, that Rapert avoided just telling me where his donations are going. Why respond with insults instead of answers? His GoFundMe page suggests the money will be used for multiple Ten Commandments monuments in different cities, but Rapert’s last update to the page, made three months ago, says he’s “raised approximately $55,000 towards the replacement of the Arkansas Ten Commandments Monument that was destroyed.” 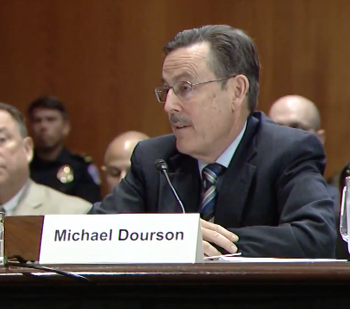 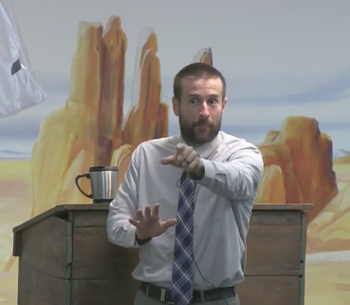