During an interview with right-wing pastor Carl Gallups on his radio show last week, writer Mike Shoesmith claimed that women “assault” men when they dress provocatively.

In the same breath, both men were quick to affirm that women don’t deserve to be assaulted or harassed… while still expressing outrage and confusion that women can wear whatever they want and expect to be treated like human beings. 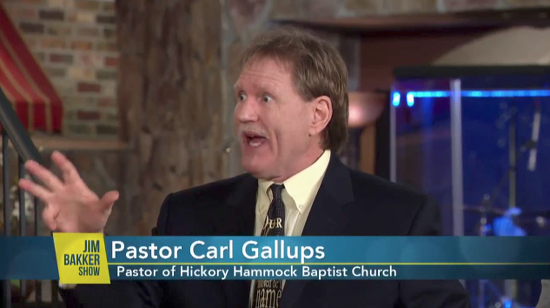 “Men are visually stimulated and unwanted stimulation should meet the basic definition of assault,” Shoesmith said, asserting that women who dress in a suggestive manner are “guilty of indecent visual assault on a man’s imagination, which does cause mental anguish and torment.”

“When a man sees a naked or partially dressed woman, a chemical reaction happens in his brain,” he continued. “Neurotransmitters like dopamine and serotonin are released, giving him an involuntary surge of pleasure. Notice the word ‘involuntary’ … Men are in a state of constant sexual assault by women who either don’t understand the severity of what they are doing, because it’s cute and they like the attention, or worse, they do know the feelings it stirs and like the control they have over men.”

So… women sexually “assault” men by wearing provocative clothing, sometimes because they know how men will react. It’s really their fault for tempting the men who attack them…

Even a woman in a burqa can accidentally arouse a man if she flashes a bit of ankle. But even if she wore next to nothing, it’s not the woman’s responsibility to control a man’s impulses.

That’s… not what Gallups said.

Gallups agreed, saying that if a man were to parade around the workplace “in a very sexually suggestive outfit,” women would immediately file sexual harassment claims. He demanded to know, therefore, “why wouldn’t it be sexual assault” when a woman does it.

“We are just discussing what should be obvious,” Gallups insisted. “The science supports us in it.”

Good luck finding a citation for that paper.

And unfortunately for Gallups, not even the Bible supports his theory. As it says in Matthew 5:30, “If your right hand causes you to sin, cut it off, and throw it away, for it is better to lose one part of your body than for your whole body to end up in hell.”

Jesus wasn’t referring to literal dismemberment but used hyperbole to demonstrate just how important it is to exercise self-control. For all their Christian claims of having the Holy Spirit in their lives, they sure are relying on women to do their dirty work for them.

It’s also worth noting that men like Gallups tend to embrace Complementarianism, the belief that the husband is the head of the household, and that it’s a woman’s job to submit to him at all times.

But how can men be trusted to lead if they are so easily lead astray by someone else’s body parts?