Oh god. You may want to sit down for this. Your ears may not be able to take it.

Trump is fighting real enemies to America
ISIS, North Korea, and fake news.
Yet you call Trump a neo-Nazi.
Dude, are you that much of a pinhead?
I mean, put both of you in a police lineup.
You’re the one who looks like a skinhead.

You had skills as a young rapper.
Why didn’t you use them for good?
Because, let’s be honest, your music has probably killed as many young black kids
As your homey Planned Parenthood.

You say that Trump treats women bad.
Listen to what your songs says about females.
Bro, you’re so lost…
It’s like you’re hanging out with Hillary’s emails.

Leave it to an evangelical Christian to condemn Eminem’s words as misogynistic and racist while praising Trump for actually putting those beliefs into action. The hypocrisy comes through loud and clear.

The response also exposes another area of ignorance.

Eminem’s freestyle, like so much of rap, is all about using his lyrics to point out glaring hypocrisies from the government and fighting on behalf of the oppressed. Feuerstein just praises Trump no matter how much harm he causes. When was the last time you heard a rap song celebrating systemic racism and bigotry?

Forget the words; Feuerstein doesn’t even get the art form.

He should stick to his day job: Screaming hate into a camera and turning people away from Jesus forever. 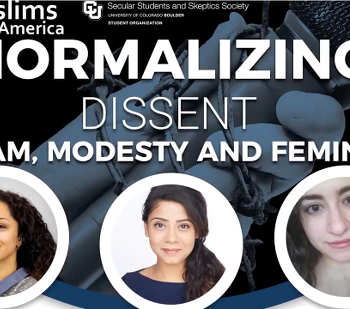 October 13, 2017
Watch These Ex-Muslim Women Talk About Modesty, Feminism, and Islam
Next Post