Kim Davis, the Kentucky county clerk who refused to issue legal marriage licenses to same-sex couples because doing so violated her Christian faith, is now visiting Romania urging the nation not to follow the U.S. down the slippery slope to (gasp) equality.

We must protect the sanctity of marriage, said the Rowan County clerk currently wed to her fourth husband.

Davis and [Liberty Counsel’s vice president of legal affairs and chief litigation counsel Harry] Mihet are holding conferences in Romania’s largest cities, according to the release. The two have already met with two Archbishops of the Orthodox Church.

“Their message is simple and based upon the recent lessons learned in the United States: same-sex ‘marriage’ and freedom of conscience are mutually exclusive, because those who promote the former have zero tolerance for the latter,” the release said.

As it stands, Romania doesn’t recognize same-sex marriage. But the nation’s Constitution only specifies marriage as “between spouses,” which leaves open a possible inclusive interpretation of the law. In order to close that loophole, the nation is heading towards a referendum that would set in stone how marriage is only recognized for straight couples. That’s what Davis and her bigot buddies are advocating.

I’m at a complete loss to tell you what freedoms have been taken away from Christians since same-sex marriage became legal in the U.S. nationwide. They’ll cite things like Christian bakers and florists having to provide services for gay weddings — as if taking money from LGBT people is an affront to their faith — but no one is barging into churches demanding evangelical pastors officiate those ceremonies. Nor would they.

Even today, Christians do more to hurt LGBT people than we ever saw the other way around. Davis is lying about how she’s suffered. All the time she spent in jail, and all the mockery she received, are the results of her own actions. Liberty Counsel, too, is lying about the struggles Christians face today. They’re just upset that a growing percentage of people all over the world want nothing to do with their interpretation of Christianity. 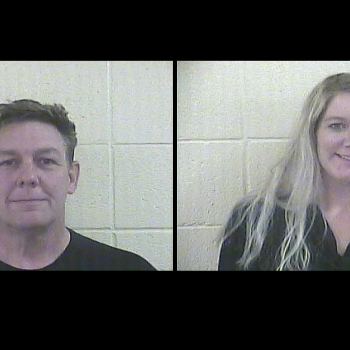 October 11, 2017
"The Lord is Good," Says Father Accused of Molesting Daughter He Kept in a Cage
Next Post