Evangelist Praises Trump for Not Politicizing Shooting, Then Blames Hollywood

In a fact-free Facebook post yesterday, evangelist Franklin Graham applauded Donald Trump‘s response to the mass shooting in Las Vegas, while criticizing Hillary Clinton (despite being a civilian) for making it all about “her agenda.”

What’s the difference between Hillary Clinton & Donald J. Trump as president? Well, there are many. But it is impossible not to notice the difference in response to the crisis of the Las Vegas shooting massacre yesterday. Hillary immediately — and ineffectively — tried to make it about gun control, her agenda. President Trump brought comfort from God’s Word and pointed America to the importance of prayer. I’m thankful millions noticed the difference.

In case you need a reminder of what Clinton’s “agenda” looks like (spoiler: It involves saving lives), here’s what she tweeted the morning after the shootings.

Las Vegas, we are grieving with you—the victims, those who lost loved ones, the responders, & all affected by this cold-blooded massacre.

The crowd fled at the sound of gunshots.

Imagine the deaths if the shooter had a silencer, which the NRA wants to make easier to get.

Our grief isn't enough. We can and must put politics aside, stand up to the NRA, and work together to try to stop this from happening again.

Apparently advocating against silencers and urging Americans to push for sensible gun safety measures — all in an effort to prevent further mass casualties — is part of some liberal agenda that goes against what “pro-lifers” like Graham want.

… We see a rise in wickedness, not just in this country but around the world. And Hollywood filmmakers continue to promote evil, wickedness, violence as a form of entertainment.

So it’s okay to promote one’s agenda a couple of days after a mass shooting — even when Hollywood has nothing whatsoever to do with what happened in Vegas — but calling on policy measures to save lives in the immediate aftermath of a tragedy is just callous and insensitive.

By the way, then-candidate Trump responded within days to the massacre in San Bernardino by calling for an outright ban on all Muslims entering the country. Franklin Graham doesn’t seem to think that’s advancing an agenda at all. At the very least, he conveniently didn’t bring it up.

So if a female politician urges small, sensible policy changes in the wake of a white man killing dozens of people, it’s advancing an agenda. But if a male politician calls for an all-out ban on certain non-Christians entering the U.S., it’s not worth mentioning. 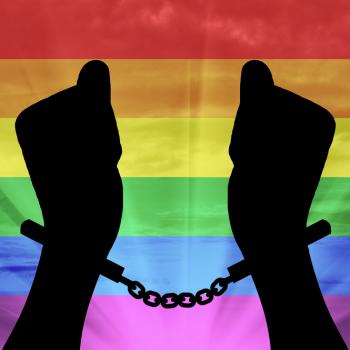 October 4, 2017 Why the Abuse of Religious Freedom Affects Both Atheists and LGBTQ People
Browse Our Archives
What Are Your Thoughts?leave a comment