This Mormon Wrote the Worst Response (So Far) to the Las Vegas Shooting October 3, 2017 Hemant Mehta

There were a lot of nasty responses to the shooting in Las Vegas that took place late Sunday night. Some of them blamed Muslims for the violence, or blamed liberals for not respecting God, or blamed America for being “wicked.”

But I was alerted yesterday to another response that was even worse than the others.

It was sent to me from Ryan McKnight, the founder of MormonLeaks. The response was posted on the Facebook page of a practicing Mormon, shared only with his friends, but screenshots of the comment were posted on other pages. I’m not interested in revealing his name or inviting further harassment against him.

The point is that it represents a kind of faith-above-all thinking that blames victims who don’t fall perfectly in line with the rules of a religion. 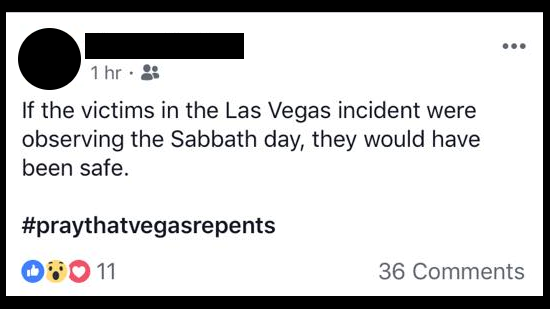 If the victims in the Las Vegas incident were observing the Sabbath day, they would have been safe.

The idea is that if everyone was observing Sabbath — staying at home, honoring God, studying the gospel — they would have avoided death at the hands of a sniper. It implies that the people attending the Route 91 Harvest music festival were not religious — or at least not religious enough.

Putting the victim-blaming aside for a moment, the man who posted this ignores the obvious: Because of how easy it is for people to acquire weapons that can kill dozens of people in a matter of seconds, these mass shootings can theoretically happen anytime, anywhere. That’s the whole idea of terrorism. This shooting could have happened during the previous two nights of the festival, too.

The solution isn’t to lock ourselves up inside our homes one day of the week, according to the whims of one particular religion. If anything, we need to address our nation’s pathetic gun laws. If the GOP stopped President Obama from restricting who can get their hands on weapons after 20 children were slaughtered at Sandy Hook, there’s no way those same Republicans will do anything sensible now that they have even more power.

Were the kids who died at Sandy Hook also guilty of not being faithful enough? Were they at school on a day when they should’ve been home? What about the victims of all the other mass shootings that seem to happen every single day?

Repenting isn’t the solution. Observing the Sabbath doesn’t matter. And God isn’t helping. He never has.

If it makes you all feel better, you should know that the man who posted this is getting plenty of criticism in his own comments section — and even more on the threads of people discussing his post.

But there are also several Mormons defending him as a pious man who said nothing wrong. This isn’t just one guy with an idiotic, insensitive opinion. He’s backed up by plenty of Mormons who agree with him. That’s part of the problem with religion. It’s a shared delusion that blinds them from being reasonable.

October 2, 2017
Please Support the Work I Do Through This Site
Next Post 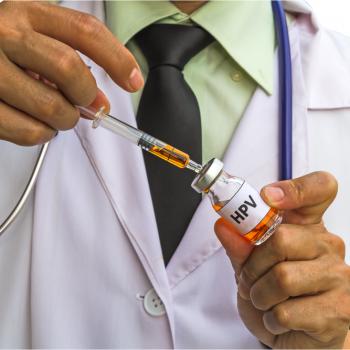 October 3, 2017 Irish Health Minister: Bishops Opposing Cancer-Preventing Vaccine Are "Ignorant"
Browse Our Archives
What Are Your Thoughts?leave a comment