Roy Moore, Now Closer to Becoming a U.S. Senator, is a Disaster for America

What happened in Alabama last night was a disaster. It was predicted. A lot of people saw it coming a mile away. But it was still an unmitigated disaster.

A lot of the headlines you’ll see today will talk about how this is bad news for Mitch McConnell, since a Senator Moore would have no intention of playing nice with the GOP establishment. They’ll say it’s bad news for Trump, who came to Alabama on Friday to stump for Strange.

But all of that is secondary to a much larger problem: Roy Moore represents everything church/state separation activists have always feared about the Religious Right.

You know how conservatives treat the ACLU as a bogeyman, as if the group is going to eradicate religion from society? It’s easy for liberals to laugh that off because we know the ACLU has no intention of doing anything of the sort. It’s just another right-wing lie.

Well, Roy Moore really is everything liberals have feared.

He is someone who, if elected this December, will place his hand on the Bible and swear to uphold… the Bible.

Moore wants to make it illegal for gay men to sleep together. He suggested that 9/11 was the result of godlessness is our society. He installed a Ten Commandments monument in the state Supreme Court in the middle of the night, then refused to remove it. He told probate judges they didn’t have to issue marriage licenses to same-sex couples even when it was legal. He said evolution was incompatible with our Constitution. He said Keith Ellison shouldn’t be allowed in Congress because he’s a practicing Muslim.

It’s true that he might be a thorn in the side of the GOP, the type of senator who won’t vote for a conservative bill if a liberal so much as glances at it. That could be entertaining for a while.

But the fact that a man with so little respect for the Constitution could get this close to that much power should frighten everybody. I know it’s Alabama. I know this was a Republican primary. But it’s disturbing that a man like Moore had this much support.

He has no intention of doing what’s best for the American people. His only obligation is to please some imaginary friend in the sky, and if decent Americans respecting our laws get in the way of that, he has every intention of punishing them. Even as the most junior member of a hundred-person Senate, he would have far more power than he deserves.

You know how the Fox News crowd constantly freaks out about potential Sharia Law creeping into our nation? (Moore himself says it already has crept in… somewhere… even if he’s not sure where…)

Well, Roy Moore is what happens when Christian Sharia enters our government.

He has a very good chance of winning the special election in December to the point that I think a lot of people see it as a foregone conclusion. But Doug Jones, the Democrat in the race, isn’t merely a liberal. He’s someone who respects the law and the role of government. There are Republicans who fit that description, too, even if their policy decisions are awful, but Moore is decidedly not that type of person.

When we look back at why Trump won the election, there are any number of explanations people make these days, including the flawed candidacy of Hillary Clinton (a characterization I never felt was fair), a desire for a political outsider, whatever the hell Russia did, etc.

But think about what Roy Moore was up against yesterday. He was up against a solid Republican senator who never fell out of line. Strange was, by one measure, the seventh most conservative person in the Senate. And Alabama rejected that, choosing instead a guy who’s off the damn chart.

This is terrible news for our country. Even if you think Moore is and always will be a fluke, a better electorate never would have let him come this close to Capitol Hill.

I know this sounds trite, but please donate to the Democrat Doug Jones. It doesn’t matter if you don’t love him — even though you should since he’s a prosecutor who has gone after domestic terrorists and KKK members who murdered people. Do it as a way to fight back against a man who, if given the power, would put gay people in jail, force public school districts to recite Christian prayers every morning, and personally tear down every brick in the wall of separation between church and state. 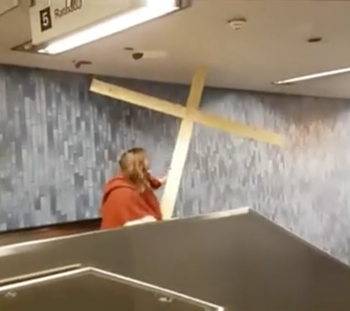 September 26, 2017
Jesus Just Can't Win With That Cross
Next Post