My Son and I Don’t Stand for the Pledge of Allegiance … for Different Reasons September 25, 2017 Hemant Mehta
Patheos Friendly Atheist. ... Want more from the Friendly Atheist? Get our FREE Newsletters and special offers!

Earlier this year, I was given what was probably my thousandth opportunity to recite the Pledge of Allegiance.

I declined. Just as I had every other time.

On that particular day, I participated in Parent Involvement Day at my son’s school. Soon after the morning bell, we stood to recite the Pledge of Allegiance. As all the other eyes turned to face the flag, mine glanced down at my son. He stood there, hands at his side, and didn’t open his mouth. My right hand, which had been unenthusiastically rising to my heart, dropped back down. This, it turned out, would not be the day that I would break my 38-year streak of non-saluting. 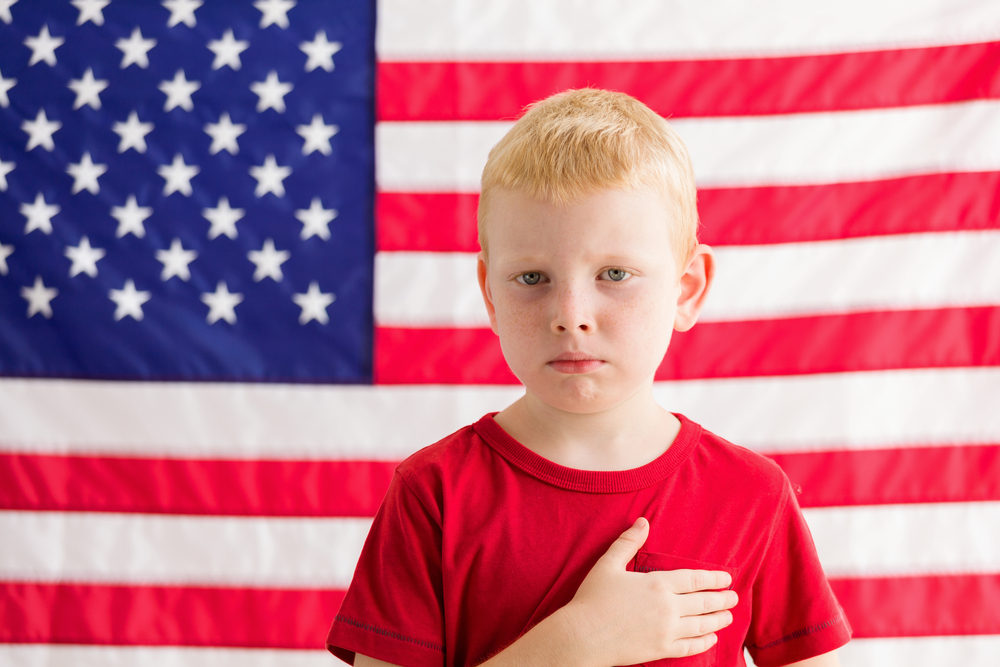 I’ll come back to why I didn’t salute on that day, but the reason why I had never saluted goes back to my parents. One issue they had with the Pledge was the term “under God.”

Many Americans associate distaste for the phrase “under God” with atheists. Michael Newdow famously tried to get the phrase removed from the Pledge. As an atheist, he claimed the phrase violated the Establishment Clause. He faced death threats for his stance (his detractors must not have noticed the Pledge’s “liberty and justice” portion). That was 2002.

But my parents weren’t atheists. They were Jehovah’s Witnesses who believed everything they did in life was “under God.” What they, and other Witnesses, disliked about the Pledge was its idea of marrying state to religion. Witnesses believe that governments are under the control of the Devil, and that God does not work through or approve of the actions of any nation, including the United States. This, my parents explained, was one reason why I was to not recite the Pledge with the rest of the class.

The pledge was first formulated in the late-18th century by Francis Bellamy, a Baptist minister. Bellamy managed to get it published in time for the 1892 Columbus Day celebrations (that year marked the 400th anniversary of Columbus’ historic landing), when it was first recited by school children following a presidential proclamation. The Pledge has been altered — “my flag” has changed to “the flag,” for example — and the style of salute has gone from the “Heil Hitler”-style salute to the now ubiquitous hand-over-the-heart gesture. The most famous change, however, was the 1954 addition of the words “under God.”

In an effort to distance themselves from non-religious Commies in the Soviet Union and China, mid-century religious activists pushed for more God in our government. During the 1950s, the phrase “In God We Trust” was adopted as the official motto of the nation, and it began to be printed on paper currency. And in February of 1954, after hearing a sermon by Pastor George Docherty in which he argued that our Pledge could be used by any nation and we, therefore, needed to make ours distinct by adding a theistic element, President Eisenhower endorsed the alteration to the Pledge. Representative Charles Oakman (R-MI) introduced a bill into Congress calling for such change and Eisenhower signed the bill into law on Flag Day of that year.

But the Witnesses’ refusal to salute the flag actually pre-dates the Eisenhower-era change. In 1935, when the Massachusetts government declared that public schools may require students to recite the Pledge, the Witnesses’ governing organization, the Watchtower Society, took Massachusetts to court. The Watchtower Society argued that its members are subjects of God’s heavenly government and consequently could not pledge their allegiance to any manmade government. Doing so, they felt, was tantamount to blasphemy.

Explaining the Watchtower’s position, then-President of the Watchtower Society Joseph Rutherford wrote, ”saluting of the flag means this: ‘I depend upon what the flag represents for my salvation.’” He compared compulsory flag saluting to the orders given by Nebuchadnezzar on the plains of Dura to bow down to a golden image.

The Supreme Court, in an 8-1 decision, ruled against the Witnesses. Mob action ensued. Students refusing to comply were expelled from their schools.

In short order, religious freedom toppled like dominoes in other states.

In New Jersey, Witness parents who steadfastly refused to allow their children to salute the flag were prosecuted for contributing to the delinquency of a minor.

Pennsylvania was home to a spat of Pledge-related violence against the children of Jehovah’s Witnesses. Twelve-year-old Stanley Brachna was knocked down, thrown against a desk, and forced to salute. Eleven-year-old Louis Wilokovich was whipped for refusing to recite the Pledge. Ten-year-old Paul Jones was forced to stand all day as punishment for non-compliance. And thirteen-year-old Anna Prinos was choked and whipped until welts appeared on her back. Her parents took the teacher to court. The court sided with the teacher.

All told, children of Jehovah’s Witnesses were expelled in 43 states for refusing to recite a Pledge that promised “liberty and justice for all.”

I never faced persecution of that sort even remotely. In every school grade, there were classmates who chided me for not participating. Some were simply jealous that I was able to evade a school practice without repercussion; others accused me of not being patriotic. This accusation tended to fade when I requested from them a definition of patriotism, and why it was important. No good explanation was ever forthcoming. In first grade, my rigid teacher told my parents she disliked that I sat during the Pledge. My parents agreed that standing would be a suitable compromise, but when the teacher still was not satisfied, she requested I leave the room during each morning’s nationalistic diversion. This gave me a moment to smile and nod heads at other Witnesses on temporary leave from their classrooms.

On the first day of fourth grade, I stood for the Pledge, but noticed the boy to my right remained seated. When I told this to my parents that evening, we discovered he was the son of Witness parents in a neighboring congregation. This same scene must have played out at his home that evening, too, because the next morning we nearly jumped at each other in the excitement of learning we were not the only Witness in class. His decision to remain seated emboldened me to do likewise, and the sight of two classmates willfully staying put during the Pledge was quickly noticed by the whole class. Our fellow students asked for an explanation, and were thrilled to discover there was no law that proscribed participation. Soon, a full third of the class remained seated with the two of us. The number probably would have steadily rose, except our teacher — who seemed content with dissenting speech as long as it was comfortably in the minority — alerted the class that no one could henceforth remained seated during the Pledge unless they first brought in a note from their parents. (That, too, isn’t required by law.)

I’m not a Jehovah’s Witness anymore. In fact, I consider myself resolutely non-religious. But even though I no longer hold religious objections to reciting the Pledge, my distaste for the patriotic act stems from other areas of my worldview.

First, I sympathize with Newdow and his argument that the Pledge violates the Establishment Clause. Implicit in the Pledge is the idea that all Americans believe in supernatural deities, thereby slighting those that do not. It’s true, the wording is vague enough to be inclusive of several religious groups, but that’s part of the problem. Which God is being referred to? Vishnu? Thor? Allah? Satan? Many gods are expressly opposed to “liberty and justice for all” — most notably the God of the Old Testament who called for the wanton slaughter of anyone who didn’t follow His extremely pedantic regulations — and therefore the Pledge is self-contradictory. How can the United States be simultaneously “under God” and offer “liberty and justice for all” if said God — and presumably the Old Testament God is the one congress and Eisenhower had in mind when they altered the Pledge — is opposed to liberty and justice for all?

But the language of the Pledge is wanting in other ways.

I’ve never been clear on how I am supposed to “pledge allegiance to the flag”? It’s just cloth. Why not also pledge to the Statue of Liberty, or the Great Seal of the United States? These are mere symbols we have created. We give them meaning, but they have no meaning in and of themselves. Of course, it might appear that we are not pledging to the flag, per se, but to the principles and values that it stands for. But the wording of the Pledge demonstrates otherwise. It states that “I pledge allegiance to the flag of the United States of America, and to the republic for which it stands.” We are thus pledging both to what the flag stands for, and the flag itself.

The word “indivisible” likewise gives me concern. What if the United States were to sell the Northwest Angle to Canada? Would that be an affront to Americans’ collective sensibilities? What if Puerto Rico requests to leave off from their second-class status and form their own independent nation? Would these actions nullify the Pledge? Indeed, there was a time when several states decided to become “divisible.” They attempted to form their own Confederate nation. Our President warred against them in what became the costliest, bloodiest war in our nation’s history. And for what? I am strained to think of any quality of life metric that would not be improved if those states had been left to leave freely. Even today, many progresses that our nation could make are hampered by those same states. So indivisibility? Not so much.

So, second, I decline recitation of the Pledge because it affronts my education as English major. Important writings and statements should be clear, understandable, and non-hypocritical. The Pledge is none of these things.

But more important than the Pledge’s affront to the Establishment clause, the frustrating ambiguity, the allegiance to a piece of cloth, and refusing to allow lands to break off from the nation, is the whole idea of freedom. At nine years of age, my son is disenfranchised from having a voice in the government he is subjected to. I’m not clear why he should pledge his life to a government he has no hand in guiding. Nor is it clear why anyone should pledge themselves to one nation. A person’s worth is not diminished merely due to expatriation. We are free to leave the country, and no rote speech should compel anyone to stay.

When I later asked my son why he didn’t recite the Pledge, he said it seemed like a stupid thing to do. Though we had never talked with him about the Pledge, he claimed to be particularly annoyed by the phrase “under God” — a phrase, it would appear, that is equally detestable to Jehovah’s Witness and atheist parents alike. My wife asked him if anyone said anything to him regarding his non-compliance. Thankfully, he said no one ever said anything. She then suggested that if he felt like participating, to swap out “under God” with “under laws.”

I suggested to him that, if he’s interested in accuracy, he should also change the last word of the Pledge to “oil.” 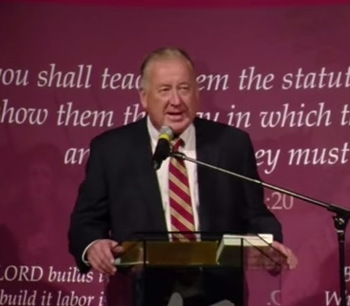 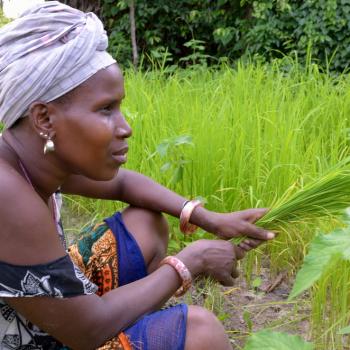