Matt Walsh Blasts “Drag Show” for Kids, Getting All the Important Facts Wrong

Conservative blowhard Matt Walsh is one of those guys who thinks the entire world, with its supposed liberal inclusive agenda, is out to get him specifically. And a Facebook post he made on Friday is perhaps the best example of that I’ve ever seen.

Walsh says his wife went to a local library with their kids to see a college’s traveling production of Little Red Riding Hood. He figured it’d be fun for the whole family. But to his shock, his wife told him the role of Little Red was being played by — are you sitting down for this? — a guy. 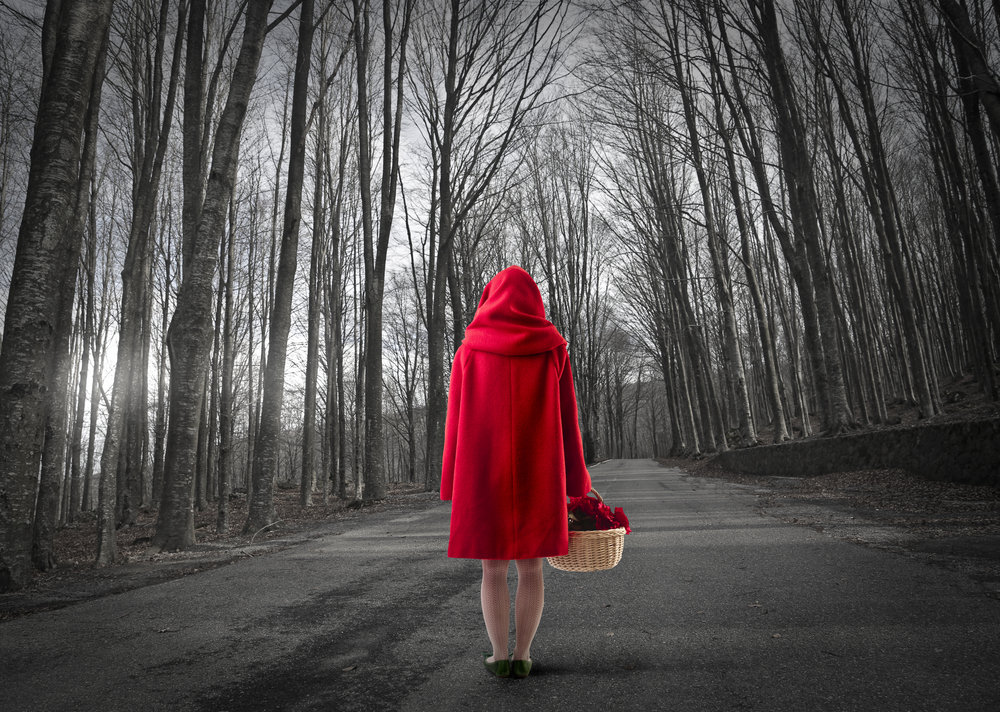 Walsh couldn’t deal with it. And he had to protect his kids from that horrific ideology known as “acting.” 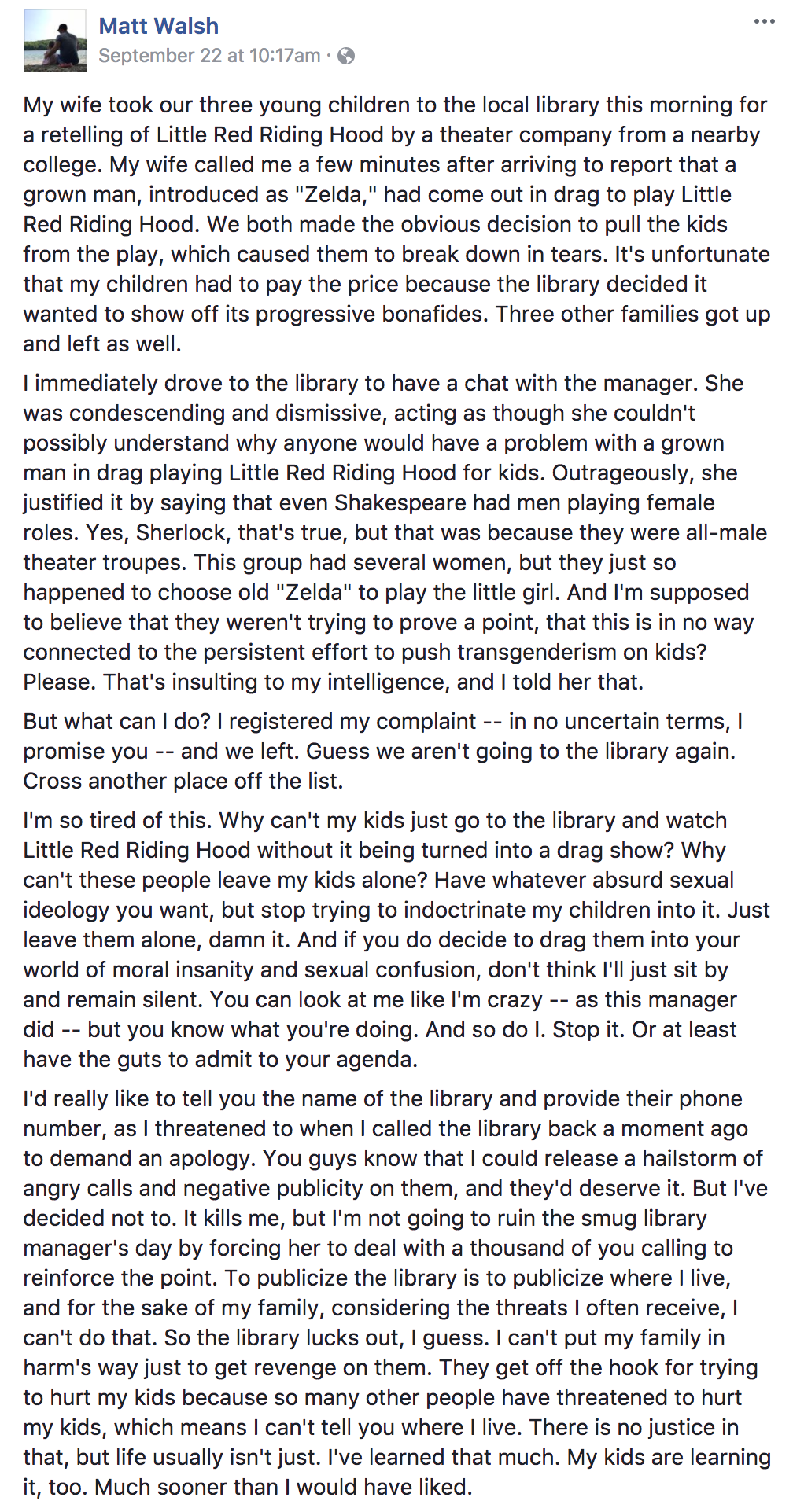 … My wife called me a few minutes after arriving to report that a grown man, introduced as “Zelda,” had come out in drag to play Little Red Riding Hood. We both made the obvious decision to pull the kids from the play, which caused them to break down in tears. It’s unfortunate that my children had to pay the price because the library decided it wanted to show off its progressive bonafides.

He later complained to the library’s manager, as if she had invited this cast, doing this production, just to push her anti-Christian views on unsuspecting children. Despite her denials, Walsh knew what was really going on here.

This group had several women, but they just so happened to choose old “Zelda” to play the little girl. And I’m supposed to believe that they weren’t trying to prove a point, that this is in no way connected to the persistent effort to push transgenderism on kids? Please. That’s insulting to my intelligence, and I told her that.

Oh, please. The library can’t insult the intelligence of a man who routinely shows he doesn’t possess any.

(As one commenter humorously noted, this was quite an ironic rant for someone who willingly took his kids to see a play about “trans-speciesism,” since a wolf dresses up as a grandmother.)

… Why can’t my kids just go to the library and watch Little Red Riding Hood without it being turned into a drag show? Why can’t these people leave my kids alone? Have whatever absurd sexual ideology you want, but stop trying to indoctrinate my children into it. Just leave them alone, damn it. And if you do decide to drag them into your world of moral insanity and sexual confusion, don’t think I’ll just sit by and remain silent…

I have no idea how this production was indoctrinating children into anything… other than making sure they never talk to wolves with ulterior motives. To my knowledge, there are no reports of any kids magically turning transgender by the end of the play. Nor was there any sexual confusion — or anything sexual — in the show at all.

But then, Walsh, being the stand-up guy that he is, decided he wouldn’t turn his fans loose on the library by posting its name and contact information.

I’d really like to tell you the name of the library and provide their phone number, as I threatened to when I called the library back a moment ago to demand an apology. You guys know that I could release a hailstorm of angry calls and negative publicity on them, and they’d deserve it. But I’ve decided not to.

He says this is because that information might give away where he lives, exposing his own family to the sort of harassment that ought to be reserved only for LGBTQ-tolerant librarians.

As expected, many of Walsh’s followers shared his belief about the awfulness of this liberal production foisted upon innocent children.

But also in those thousands of comments was a rather important note from a woman named Laura Blum.

It turns out she’s the mother of the male actor. And Blum made clear the only reason her son was acting in the lead role that day was because the regular actress was out sick. (The show must go on, right?) She had some choice words for Walsh, too.

Matt Walsh there wasn’t a hidden agenda and it just so happens that he just happened to be the understudy for the show. And while u believe the day was ruined for u. You absolutely ruined the day for my son who just wanted to bring entertainment to a group of children when his fellow actor was not able to be there. He has performed on other occasions where no one assumed anything and the cast and audience was able to have a wonderful time. Thank you for sucking the joy out of the day, and turning the hard work of a group of young adults dedicating their personal time , without pay, into “something you have decided is awful” instead of the wonderful community out reach that it was intended to be. We agree on one point, I too am very sorry ur children had to be dragged out crying from a show they obviously did not want to leave

Other commenters who know the family have weighed in to say similar things. And Blum added in another comment that her son is a “straight white Christian.” He just wanted to put a damn smile on those kids’ faces. At least until Matt Walsh ruined it for everyone.

It didn’t take much internet sleuthing to find corroboration for her comment in a separate post written by Ben McCardell. 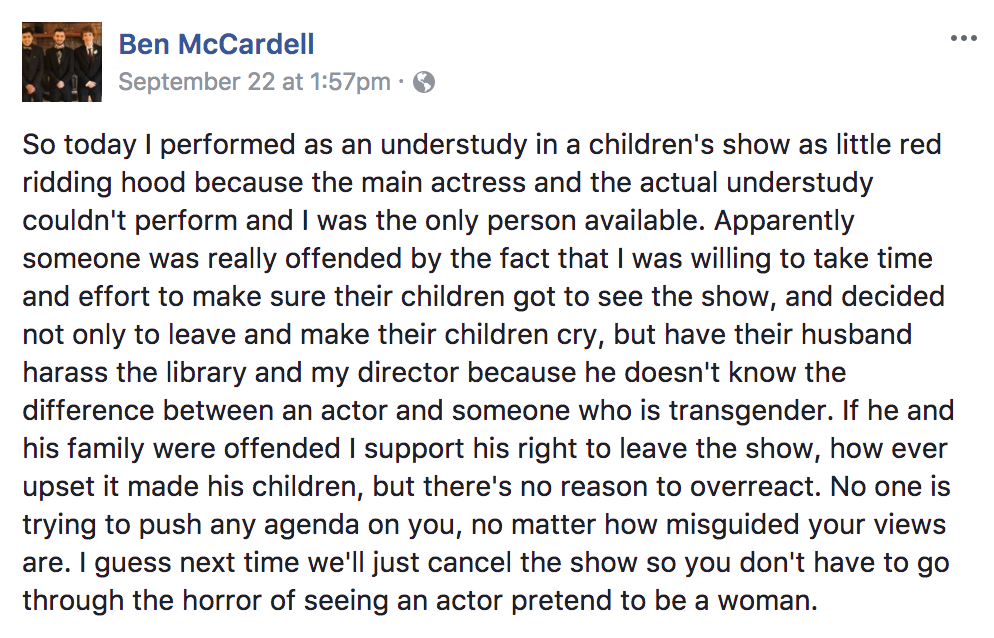 So today I performed as an understudy in a children’s show as little red ridding hood because the main actress and the actual understudy couldn’t perform and I was the only person available. Apparently someone was really offended by the fact that I was willing to take time and effort to make sure their children got to see the show, and decided not only to leave and make their children cry, but have their husband harass the library and my director because he doesn’t know the difference between an actor and someone who is transgender. If he and his family were offended I support his right to leave the show, how ever upset it made his children, but there’s no reason to overreact. No one is trying to push any agenda on you, no matter how misguided your views are. I guess next time we’ll just cancel the show so you don’t have to go through the horror of seeing an actor pretend to be a woman.

Matt Walsh hasn’t responded to any of these comments. Not even underneath his own post, where Laura has posted multiple times. As far as I can tell, Walsh hasn’t apologized to Laura, Ben, the rest of the cast, the librarians, his followers, or his children.

He’s lucky no one expects Christian Right activists to show any degree of humility. This is par for the course for a man who screams bloody murder at the mere possibility that a trans actor might appear in a children’s production. Because trans people appearing in public would somehow be an affront to his so-called Christian values.

It would have been bad enough if Walsh’s post was accurate. But it wasn’t. Walsh is completely, objectively wrong and there’s no reason to think he’ll ever correct himself. That’s not what he does. If anything, he’ll probably just double-down and say the library was still wrong to allow a male actor to portray a female character.

By the way, I reached out to both Laura and Ben last night for comment, but I haven’t heard back as of this writing. I hope they’re doing okay, and I hope Ben has many more successful performances left in him.

Never let a bigot like Walsh keep you down. 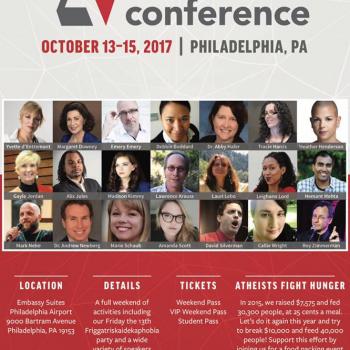 September 24, 2017
I'll Be Speaking in Pennsylvania and Massachusetts in October
Next Post

September 25, 2017 NC Church Promoted Unemployment Fraud So Members Could Keep Tithing in Full
Browse Our Archives
What Are Your Thoughts?leave a comment