Jim Bakker: Rich People Should Buy a “Million Dollars’ Worth” of My Food Buckets

Some televangelists ask viewers to send them seed money.

Some ask for just a few bucks to help expand their ministries.

Jim Bakker wants rich people to give him millions of dollars, in exchange for giant buckets of food, because that cash will be useless in the End Times.

Guest John Shorey told viewers to stock up on Bakker’s food buckets and not to worry about running out because God will miraculously refill them as needed.

“When you empty a bucket of food,” Shorey said, “trust God to refill it.”

“Do a million dollars’ worth of food, I’m serious,” Bakker said. “If they’re rich, their money is going [away] anyway, John. It’s not going to be worth anything. The crash is coming, so why not sow it into the Lord?”

Storey added that God would be angry if they died without giving their money away, and what better way to help the hungry then buying them the giant buckets of food?

Because that’s what poor people want. Shitty food that rich people wouldn’t even think of touching.

Sure, you could give your money to a charity, or invest in scientific research, or purchase medical equipment, or mosquito nets, or malaria vaccines. But why do any of that when you can spend $10,000, many times over, buying 160 buckets of food with 38,372 servings?

That’s how we cure starvation. Or exacerbate it. One or the other. 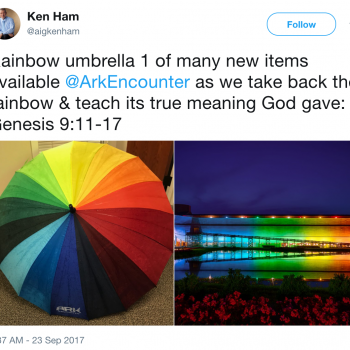 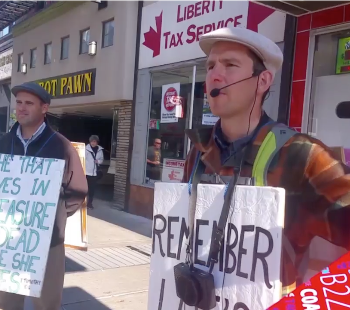 September 23, 2017 Street Preacher Tells Man Wearing Shorts That He's an "Evil, Vile, Sinner"
Browse Our Archives
What Are Your Thoughts?leave a comment