A TX Church “Fired” a Hurricane Relief Volunteer for Being a Jewish Lesbian September 18, 2017 Hemant Mehta

Carmen Hix, a 64-year-old Navy veteran and Houston native, knew she wanted to help other people after Hurricane Harvey hit her city. She’s Jewish, but there was a nondenominational Christian church doing relief work nearby, so she filled out their volunteer form and joined them at a food pantry. Even more than that, she donated $500 worth of food and took a week off of work to help out.

And how did Calvary Houston thank her?

Pastor Ron Hindt pulled her aside on September 8, confirmed that she was a Jew, asked if the rumors were true that she was a lesbian (she is), then fired her.

They fired her from volunteering at a food pantry.

Here’s what Hix wrote on Facebook after this happened:

… I told Pastor “Ron” that when they called me to volunteer, they didn’t bother to ask me to check or not check those boxes…Jewish and Lesbian. Told him…”When you needed me, it didn’t matter. Now that you’re dwindling down the operation, it seems to matter.” He gave me the the tired “blah, blah, blah” that Pastors have a tendency to do. “We can’t let you represent our church, as being a Lesbian is a sin…” I let him know he should be ashamed to call himself a Christian.

Hindt’s version of the story was posted, then deleted, from the church’s Facebook page, but not before Hix copy/pasted the whole thing:

Recently, a resident of the community volunteered to serve with us and we wholeheartedly accepted her assistance. Honestly, the need is great in this area. We are so thankful for the many who have volunteered.

Unfortunately, we’re saddened by an incident involving some miscommunication that took place off campus in an exchange between various community volunteers at the church’s food pantry.
I met with the individual who was upset and apologized for the misunderstanding. (I apologize once again if you are reading this.) I invited her and her partner to sit with my wife and I in church this Sunday.

There’s no apology in there. Read between the lines and it’s possible he was adding insult to injury. Was he only inviting Hix and her partner to church so they would convert to Christianity and disavow their sexual orientation?

The note didn’t help. In fact, it only made the bad decision look even worse.

“I asked, ‘So if I were a liar with an evil heart, and I told you what you want to hear, that I am a Christian, I would be allowed to continue to contribute to those less fortunate than I?’ I was told, ‘Yes,” Hix said.

They’d rather have a lying Christian than a kindhearted Jewish lesbian (who doesn’t hide it). If the needy suffered a little more because there was one fewer volunteer available, so be it. At least they wouldn’t catch any of those gay cooties.

This isn’t a story about discrimination. There are no lawsuits flying around. This is just a church making an idiotic decision — turning away someone who wanted to work with them to help other people because she didn’t fit the characteristics they require of their members. Instead of embracing her — and even showing her how wonderful their church could be — they rejected her and gave her plenty of reason to condemn everything they stand for. She has no reason to come to Christ now. Why bother?

The church’s Facebook page has a banner that reads “You are family,” but it seems like this family lives in a broken home.

The silver lining to all this is that Hix eventually found a new group to volunteer with. They didn’t match her sensibilities either, but they were focused on the work just as she was, and they were proud to have her volunteer with them. 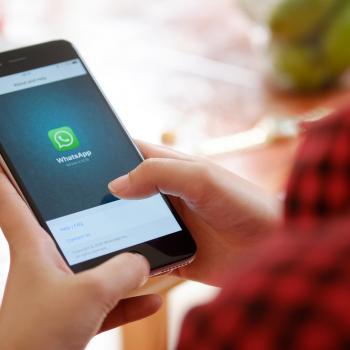