The House Has Passed Legislation That Could Turn Churches Into SuperPACs September 16, 2017 Hemant Mehta

The House Has Passed Legislation That Could Turn Churches Into SuperPACs

Christian churches are one step closer to becoming fundraising arms of the Republican Party thanks to a spending bill passed by the U.S. House this week.

The $1.2 trillion “megabus” appropriations spending bill, which passed on a 211-198 vote this Thursday, includes a provision gutting the Johnson Amendment, which forbids places of worship from endorsing political candidates if they want to keep their tax exempt status.

Donald Trump signed an executive order this past May that supposedly weakened the amendment, telling the IRS to look the other way when informed of violations, but it wasn’t a law and it didn’t have much teeth to it. Plus, the IRS was already looking the other way in most of these cases. The agency wasn’t enforcing its own rules.

The appropriations bill just passed by the House, however, is much stronger. Section 116 of the “2018 Financial Services and General Government Appropriations Bill” forbids the IRS from devoting a single penny to investigating claims of those violations — unless the IRS commissioner signs off on it, informs two congressional committees, and waits 90 days to act.

The irony here is that thousands and thousands of religious leaders don’t want this to happen. They’ve signed a letter urging Congress to keep the Johnson Amendment in place.

While atheist groups aren’t represented in that letter, the Secular Coalition for America and 10 of its member groups sent a letter to the U.S. House Committee on Appropriations in July saying roughly the same thing (even though we don’t have houses of worship). The atheists also pointed out that the proposed repeal was problematic because it gave churches — but not secular non-profits — a way to endorse candidates without losing tax exempt status. In other words, this is a potential lawsuit waiting to happen.

According to the Secular Coalition for America’s Executive Director Larry T. Decker,

“… The only supporters of this crusade against the Johnson Amendment are a select few Members of Congress who are doing the bidding of the fringe leaders of the religious right. The Secular Coalition for America will not stand by while the integrity of our political system is comprised for the benefit of religious fundamentalists who want to engage in partisan electioneering on the taxpayer’s dime.”

“The lawmakers leading the effort to gut the Johnson Amendment claim they are doing so on behalf of the religious community,” said Decker. “This is demonstrably untrue. The majority of faith leaders know the Johnson Amendment protects their houses of worship from becoming cogs in the political machine. Americans of all faiths and none are speaking up together in defense of the Johnson Amendment. Now, it’s time for Members of Congress to listen.”

So what happens now? This bill doesn’t just get handed off to the Senate now. It’s a little more complicated than that, as the SCA’s spokesperson Casey Brescia explained to me in an email:

We don’t know if the Senate’s version of this bill will include the Johnson Amendment repeal, and we don’t know if the House’s language will be kept during the reconciliation process. But this is the closest Republicans have come in years to turning churches into regular campaign stops — and fundraisers — for politicians.

While many right-wing pastors might welcome that opportunity, many more liberal pastors understand that they would be turning their churches into political battlegrounds and turning away from the message of the Gospel. They don’t want to see the Johnson Amendment repealed either.

(via ThinkProgress. Screenshot via YouTube. Large portions of this article were published earlier) 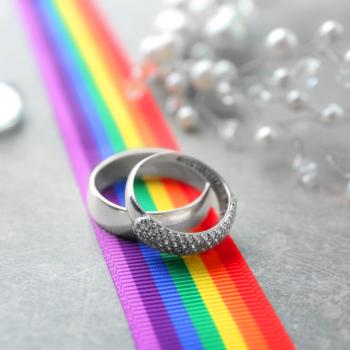 September 16, 2017
Two Female Pastors Got Married Over the Objections of a Pentecostal Minister Dad
Next Post