You knew this was going to happen. Televangelist Jim Bakker said on his show yesterday that Hurricane Harvey was God’s “judgment on America” for our sins. Which is Christianese for both “abortion is legal” and “LGBTQ people have more rights than they deserve.” Bakker was joined by right-wing Pastor Rick Joyner. 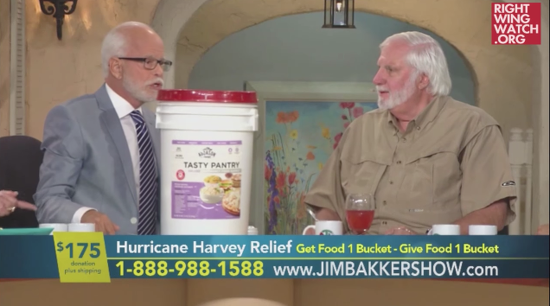 Joyner asserted that the storm had nothing to do with climate change because “the real issue with the weather and everything else on the earth has to do with sin and wickedness.”

“The whole earth will cry out because of the shedding of innocent blood,” he said. “That’s what throws nature off more than dumping CO2 or anything.”

That prompted Bakker to declare that he felt that “this flood is from God, it’s a judgment on America,” and Joyner agreed, noting that “these kinds of things don’t happen by accident.”

Bakker went on to blame Houston’s former mayor, a lesbian, for “order[ing] all the preachers to turn in their sermons before they preached them.” As reporting has shown many, many times, lawyers working with the city were trying to see if churches had broken the law with regards to how they fought against a local anti-discrimination ordinance and that required copies of certain sermons. The content matter was irrelevant. The city eventually backed down after a lot of bad press.

This was just two people who know nothing acting like they know everything. I haven’t seen that since whatever conversation took place this morning in the White House…

Ironically, when Joyner appeared on Bakker’s show last October, he declared climate change to be a hoax because “We haven’t had any” hurricanes since Katrina. He was wrong then and he’s wrong now. Not only have we had many more smaller hurricanes, climate change is making them occur more frequently and with more ferocity. It’s only going to get worse.

Bakker’s not off the hook either. Back in June, he talked about how Pat Robertson had the ability to tell hurricanes to “go back out to sea.” Yet we haven’t heard any admission that Robertson was useless this time around.