So they waited. Months after the Supreme Court legalized marriage equality nationwide, they went back to the same courthouse — this time with their families — to get their certificate and celebrate with their loved ones.

That sounds so awful, it borders on fiction, but Brookover and Abramovich weren’t making it up. This past April, they filed a lawsuit (with the support of Americans United for Separation of Church and State and Fairness West Virginia) against Deputy Clerk Debbie Allen, County Clerk Jean Butcher, and Gilmer County.

The complaint itself held little back in terms of how the couple was affected:

Well, at least they’re not winning this round.

The two sides announced yesterday that they had reached a settlement. The details aren’t all public, but the county is very clearly apologizing for what their staff member did.

As part of the settlement, Gilmer County agreed to apologize to Abramovich and Brookover and issue a public statement regarding the wrongdoing by the County Clerk’s office. They also promised to take steps to ensure that county officials and employees do not discriminate against anyone in the future, regardless of religious beliefs about sexual orientation or gender identity. Finally, the county agreed to pay damages in recognition of the harms Abramovich and Brookover suffered. (Gilmer County’s statement is available here.)

“We’re glad Gilmer County recognizes that the clerk’s actions toward Amanda and Samantha were wrong, and that county officials are taking steps to ensure that all who do business with Gilmer County are treated equally and with respect,” said Richard B. Katskee, legal director of Americans United. “We wish that Amanda and Samantha hadn’t suffered mistreatment and harassment on their wedding day, and we hope that they can take comfort in knowing that their brave actions to right this wrong should prevent future couples from experiencing what they went through.”

The apology from the county also points out that staffers will undergo additional training:

… [the couple was] disrespected and disparaged by staff at the County Clerk’s Office because they are a same-sex couple. That was wrong.

The County has also agreed to require all officials and employees of the County Commission and County Clerk’s Office to take part in a training program provided by Fairness West Virginia to help ensure that County policy is followed and the mistreatment that Ms. Brookover and Ms. Abramovich received does not recur.

So because of the bigotry from a conservative Christian clerk, everyone working for the county will have to take classes on how to be a decent human being. I guess they don’t teach that in Conservative Sunday School.

We owe a debt of gratitude to Brookover and Abramovich for going through this (twice!) and pushing the county to change its ways. Because of them, other same-sex couples won’t have to deal with similar harassment from the local government. 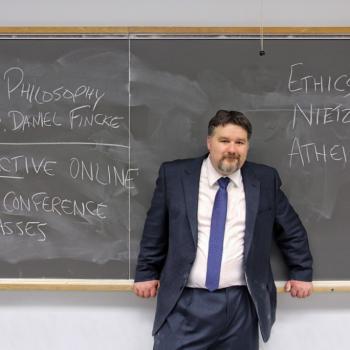 August 30, 2017
A Rare Opportunity to Learn Philosophy from a Superb Teacher
Next Post

August 31, 2017 Arkansas Church Uses New Law To Exert "Spiritual Influence" in Schools
Browse Our Archives
What Are Your Thoughts?leave a comment