On today’s episode of The 700 Club, Pat Robertson interviewed Kellyanne Conway. It may sound like a match made in Hell, but it makes sense since Conway tells lies for a living and Robertson readily accepts conspiracy theories.

The first part of their exchange went exactly as you’d expect, with Conway saying that Donald Trump‘s most notable characteristic is his “humility.” (Seriously.)

While the released clip doesn’t show any more of the interview, I’ll assume Robertson didn’t push back on that one. 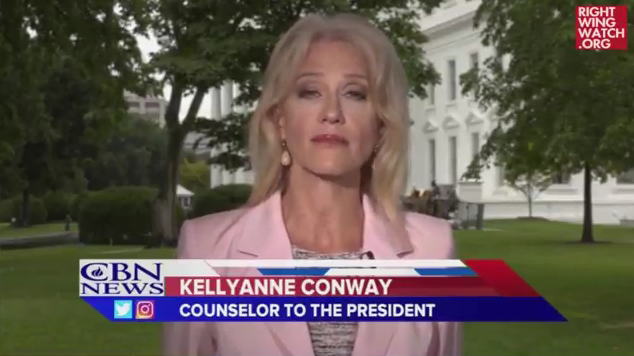 Robertson kicked off the softball interview by asking Conway “what characteristic stands out in your mind” most about Trump, to which she replied that “it’s one that most of the media never associate with him, and I would say it’s humility.”

Donald Trump: He has the best humility. Everyone says so!

If you believe that, I have a border wall to sell you.

Needless to say, Trump’s not humble. The one thing everyone knows about him is that he can’t stop bragging about himself even when there’s nothing to brag about. He’s a shameless self-promoter who’s unable to handle the mildest of criticisms. He assumes he’s the best at everything he does no matter how much evidence points in the other direction. While we’re at it, Trump’s not exactly known for being responsible or understanding the gravity of the office, either.

When the history of this era is written, let it be known that all of these people surrounding Trump were complicit in his actions and ignorance. They continued to defend him no matter how despicable he became. They downplayed or ignored his faults and functioned as glorified babysitters for a man who never grew up.

And for any news organization, including the Christian Broadcasting Network, to play along with that is utterly irresponsible.