Franklin Graham: All HS Football Coaches Should Pray on the Field Next Week August 25, 2017 Hemant Mehta

Franklin Graham: All HS Football Coaches Should Pray on the Field Next Week

Evangelist Franklin Graham, whose moral authority says it’s fine to be the warm-up act for a race-baiting pussy-grabbing president, wants high school football coaches across the country to break the law.

It comes in response to what happened a few days ago to Joe Kennedy. He’s the former assistant football coach at Bremerton High School in Washington who led prayers on the field after games, despite several warnings that he couldn’t proselytize while on the clock. After getting fired, he sued the school district, and this week, he lost his appeal.

Graham, who can’t stand it when judges respect the Establishment Clause, wants all coaches to follow suit and pray on the field. 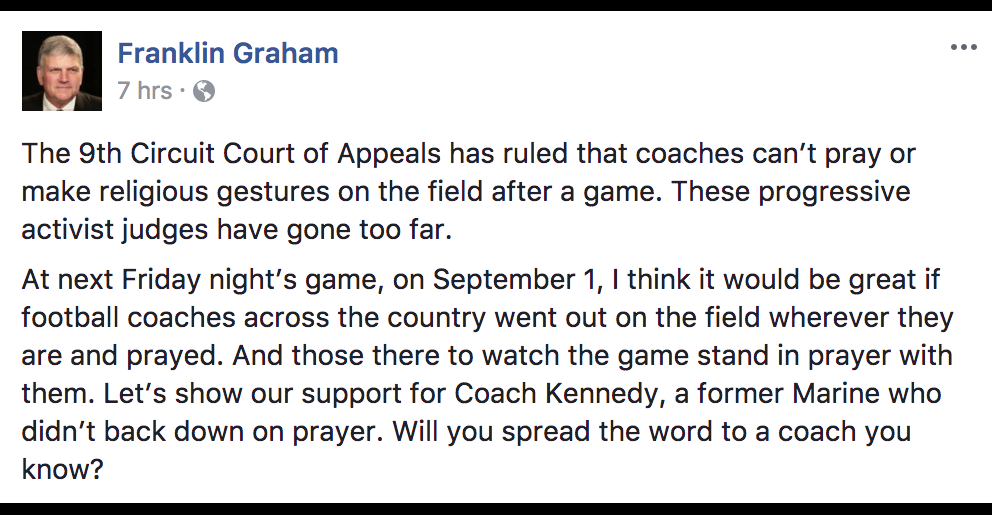 The 9th Circuit Court of Appeals has ruled that coaches can’t pray or make religious gestures on the field after a game. These progressive activist judges have gone too far.

At next Friday night’s game, on September 1, I think it would be great if football coaches across the country went out on the field wherever they are and prayed. And those there to watch the game stand in prayer with them. Let’s show our support for Coach Kennedy, a former Marine who didn’t back down on prayer. Will you spread the word to a coach you know?

First of all, the “progressive activist judge” who wrote the unanimous opinion was appointed by George W. Bush.

And what Graham is suggesting is illegal for a reason. A public school football coach is still a government employee after the game ends. They still have to run post-game meetings with players and the staff, do media interviews, file paperwork, etc. When coaches — in that capacity — pray on the field, they’re sending the message that athletes should do the same if they want to curry favor with them. A good relationship with the coach could mean more playing time or more attention in practice, which could lead to better opportunities (including scholarships).

Imagine being an athlete who doesn’t join the coach’s prayer circle. Or who speaks out against it. What does that do for team morale?

More importantly, Graham is telling these coaches to turn a football game that’s supposed to be all about the students into a spectacle all about them. He might respond it’s all about Jesus, but that’s bullshit. Coaches could pray in their minds all day long. The government’s not going to come after them if they privately pray at halftime. But this is about taking a game meant to showcase the students’ hard work and turning it into church.

If a Satanist did what Graham is asking, he’d be the first one whining about it. (But Satanists wouldn’t do that. Satanists are good people.)

Maybe Graham should open that Bible he claims to love and check out Matthew 6:5-6:

And when you pray, do not be like the hypocrites, for they love to pray standing in the synagogues and on the street corners to be seen by others. Truly I tell you, they have received their reward in full. But when you pray, go into your room, close the door and pray to your Father, who is unseen. Then your Father, who sees what is done in secret, will reward you. 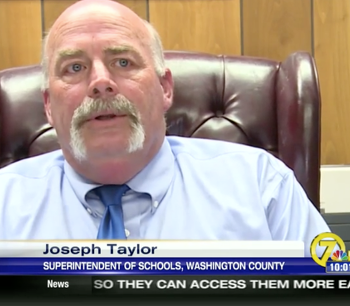