Most recently, he successfully sued to take down a giant Christian cross in a public park in Pensacola. In 2014, he gave a wildly entertaining Satanic prayer at a meeting of the Escambia County Board of County Commissioners. In 2015, to protest prayers at meetings of the county school board, he spoke over a Jewish man delivering an invocation before reciting a Satanic prayer during time for public comments.

The point is: When it comes to prayer at public meetings, if he sees that they’re rarely including non-Christian views, he’ll ask to deliver an invocation and make it as provocative as possible. If he’s at a meeting that shouldn’t have invocations at all, he’ll turn that portion of the meeting into a spectacle.

It’s not how I would tackle the issues, but there you go.

That brings us to what he did this afternoon at a meeting of the Emerald Coast Utilities Authority. The story’s complicated, so I’ll do my best to get the details right.

Two years ago, Suhor was denied the chance to give at invocation at these meetings. It’s weird that a utilities board has invocations at all, but the board members were reciting them, all to a generic God. That meant other perspectives, including atheistic ones, weren’t in the mix.

But if the meeting’s not called to order yet, it shouldn’t be a problem if Suhor offers his own invocation at that time. So today, he began chanting “Hare Krishna.” 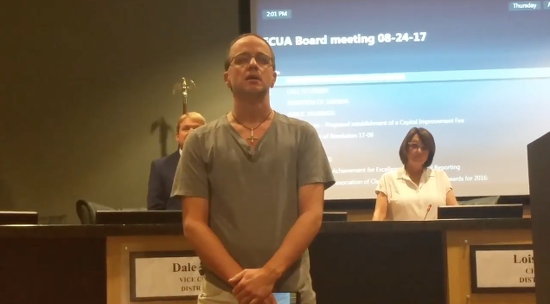 No one stopped him for several minutes. But when it was time for the commissioners to pray, they asked him to stop. He refused since the meeting hadn’t begun yet. And then everything descended into chaos.

In that video, you can see a security guard approach Suhor and ask him to leave because he’s disrupting the meeting (even though it hasn’t started yet). The cop attempts to forcibly move him away since he’s causing a “disturbance” and Suhor stands his ground. (At one point, the cop breaks out pepper spray but doesn’t use it.) 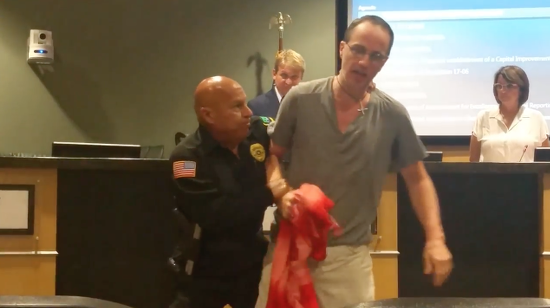 Suhor says he’ll stop chanting as soon as the meeting is called to order. So that’s what the commissioners did. They called the meeting to order, and Suhor calmly sat down.

And then, almost immediately, the commissioners recessed for prayer. They began the meeting… then took a break to pray.

So Suhor got up to chant protest again. The county’s attorney then asked Suhor to leave because he was creating a disturbance, and this time, Suhor was escorted out of the room for good. (He wasn’t allowed back in for the public comments part of the meeting, either.)

You can call it rude — I will; it’s absolutely impolite — but it raises the question of why this board is praying at meetings in a way that excludes non-religious people from participating. Courts have said that invocations during government meetings are legal as long as speakers of certain faiths and no faith aren’t excluded. Even if you remove Suhor from this equation, what you had here was a government board clearly leading prayers during an official meeting. Not before. Even if you claim it was legal on a technicality, it’s hard to believe they can begin a meeting, then take a break to do something illegal, before getting back to work.

Suhor doesn’t know what his next move will be — he’s considering assault charges or a lawsuit — but he did share with me his reaction to this whole exchange: “Religious freedom belongs to them, but not to me.” 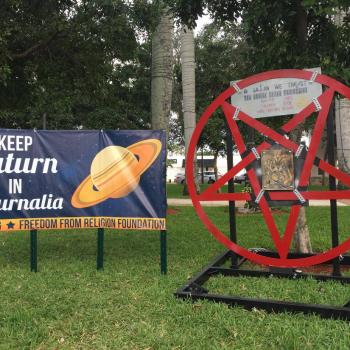