Bu in July, it looked like all that frustration had amounted to a positive policy change: The City Council was proposing a ban on all religious displays in the future.

The city really had two choices: Allow all displays like last year or none of them at all. And if they couldn’t stop the vandalism, it made perfect sense to go with the latter option in the future.

Ironically, that would have meant the person who vandalized the Satanic display, who I always assumed was Christian (though I don’t know that), effectively prompted the removal of the Nativity scene from the park.

That hope, however, was short-lived. Hours after that proposal became public, the Boca Raton City Council voted to do something very different. Satanic monuments would indeed be banned, but some religious ones would be allowed in the park: A Nativity scene, a Christmas tree, a menorah, and a snowman.

The thinking behind this, I assume, is that the law obviously prevents an establishment of religion… but if you have a Christian display, a Jewish display, and a couple of other random things thrown in there, it’ll throw everyone off the scent! The law makes clear that a Nativity scene may be allowed on government property as long as it’s not the only game in town.

“Hopefully that will be satisfactory,” Haynie said.

Legally speaking, she might have had a case. There’s Supreme Court precedent to that effect.

But there was a caveat she was ignoring.

The reason for why the city was making this decision suggested the real goal was to keep Satanists and atheists out of a public space — and that could be grounds for a legal discrimination case.

City leaders say the move would relieve the burden of policing the displays.

“When (police are) being called to respond to these vandalism issues, they’re taking officers away from other people who might need it,” said Chrissy Gibson, city spokeswoman. She added that the decision to place city-owned displays is not yet official.

“We’ll hear from the public (at the meeting),” Gibson said.

To put that another way… someone vandalized a Satanist’s display, therefore the city decided to punish the Satanist.

If they’re going to reward the vandal like that, why not give him a medal? It was an absurd response. If police officers can’t respond to acts of vandalism, then they should work to prevent that from happening, not punish the victims.

It looks like that explanation finally got through to them, because the City Council has now reversed the ban on Satanic monuments.

The City Council rejected the ban Tuesday at the urging of more than a dozen residents who spoke in opposition to a prohibition on the displays Tuesday.

Critics of the ban say the city should step up police enforcement or install cameras in the area instead of banning all religious displays outright.

Good for those residents for speaking up, and good for the Council for (eventually) doing the right thing.

Satan will rise again in Boca Raton this December. Maybe this time, the cops will be paying attention so the display doesn’t get vandalized.

(Thanks to Eric for the link. Large portions of this article were posted earlier) 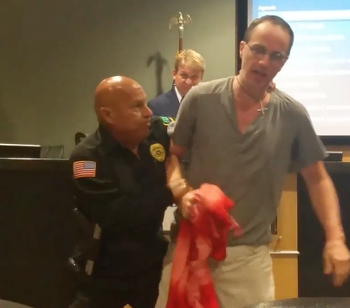 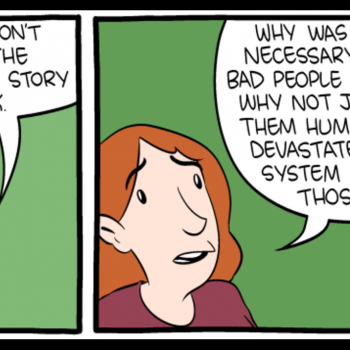 August 24, 2017 See? Noah's Ark Wasn't About a Genocidal God At All
Browse Our Archives
What Are Your Thoughts?leave a comment