A Picture of Malaysian Atheists Has Led to a Government Crackdown on Ex-Muslims August 6, 2017 Hemant Mehta

Atheist Republic, an online Facebook group with more than 1.7 million followers around the world, frequently holds meetups for members in larger cities. It’s not just a chance to interact in person, though the importance of that shouldn’t be understated. They can do a lot more when they get to organize in person. The Metro Manila “Consulate,” for example, even raised money for disaster victims in the Philippines.

Last week, the Consulate of Kuala Lumpur in Malaysia got together for dinner and drinks and they took a picture of the group to celebrate the occasion.

Taking that picture may have been a mistake.

Malaysia ostensibly has freedom of religion… but the rules don’t apply to Muslims who want to leave the faith. There are rules to prohibit — or at least make it very difficult to go through — such a (de)conversation.

So back to that picture. The Malaysian government caught wind of the photo and began wondering if there were any secret Muslims in there… because they had to be punished.

The government will investigate if there are Muslims who have joined the Kuala Lumpur Atheist Club, as made viral on the social media recently, said Deputy Minister in the Prime Minister’s Department Datuk Dr Asyraf Wajdi Dusuki.

“If it is proven that there are Muslims involved in atheist activities that could affect their faith, the state Islamic religious departments or Jawi could take action. I have asked for Jawi to look into this grave allegation,” he told reporters after officiating the Indera Mahkota Division Umno Youth Delegates’ Conference here today.

All this because a handful of atheists wanted to hang out together.

It doesn’t stop there either. The news coverage led to a lot of Malaysians calling for the imprisonment or death of apostates over social media. Ali A. Rizvi posted a number of them: 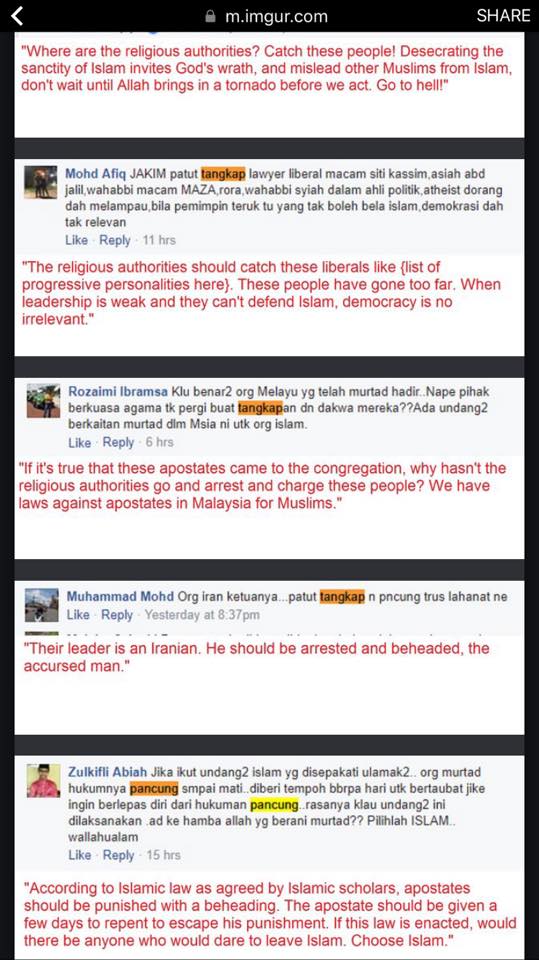 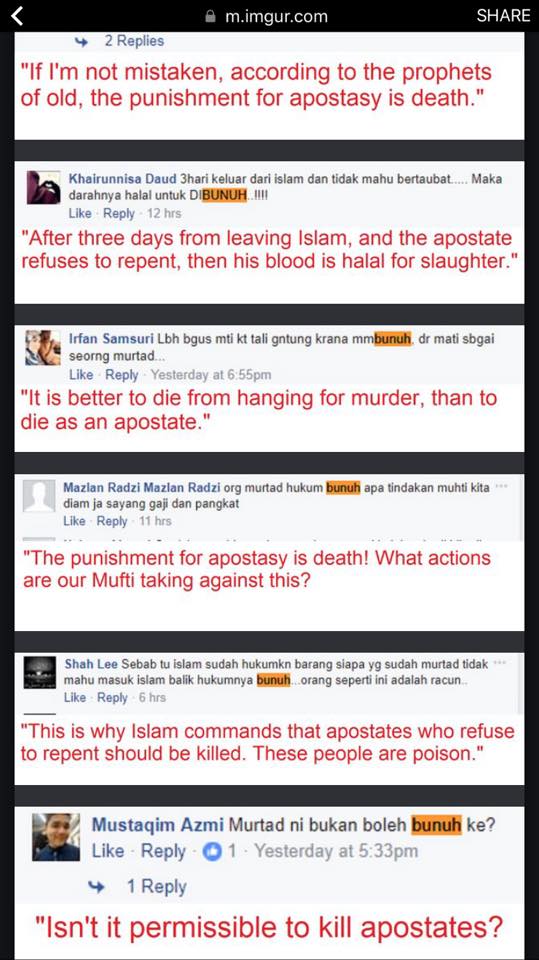 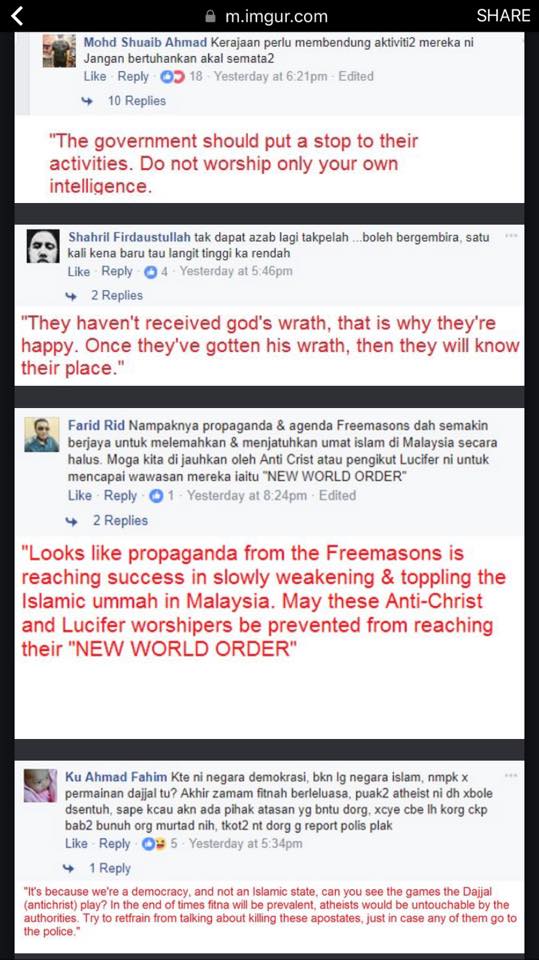 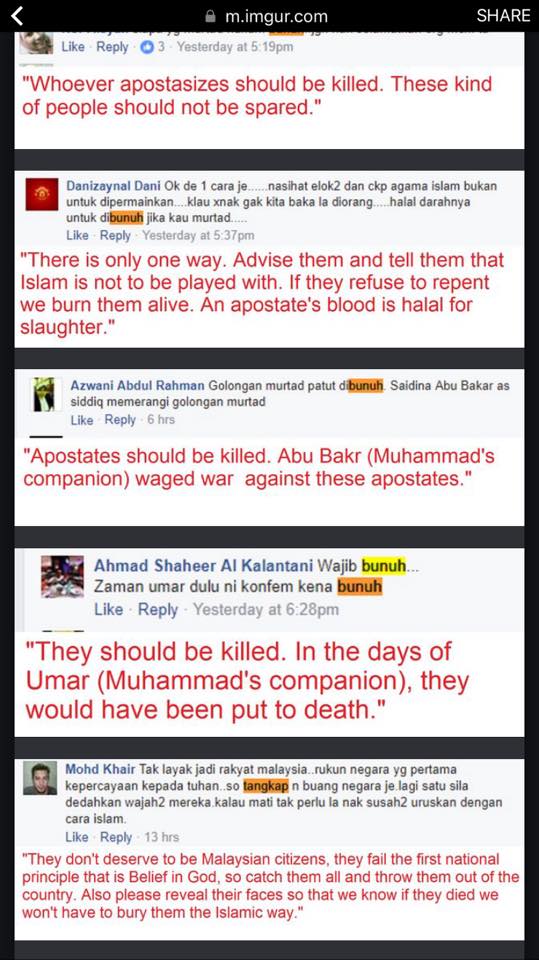 This is the reality for those who leave Islam. We speak a lot here in the West about anti-Muslim bigotry, which is real and abhorrent. But it pales in comparison to Islamic bigotry, which gives license to its followers to murder those who dare to think for themselves, outside of Islam.

Ex-Muslims, who still have Muslim names and share ethnicities and nationalities with other Muslims, are targeted by both.

Armin Navabi, the founder of Atheist Republic, noted that the calls for beheading of members (including himself) was unique to the groups in certain countries… and they all had something in common.

Because of the unwanted attention to the Malaysian group, other Consulates in majority-Muslim nations are also being targeted, like the one in Jakarta, Indonesia. That group took precautionary action on Facebook, purging its (closed group) membership of anyone who was still in the queue to be approved along with anyone who hadn’t commented in a while. Because who knows if they’re leaking information to the outside. 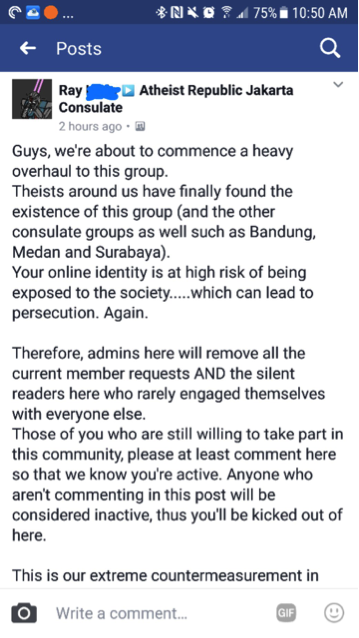 The Malaysian Consulate released a long statement tonight explaining the “hidden crisis of ex-Muslims” and the bizarre version of religious freedom they have in the country:

Many Muslims who have attempted to convert or leave Islam have received death threats. Those who have converted or left Islam, lead a secret double life. The civil court claims that conversions are under the jurisdiction of the [Sharia] courts, but converts contend that as they are no longer Muslim the [Sharia] courts hold no power over them. Authorities only allow Sunni Islam to be practised, arresting those who stray from those beliefs. Converts taken to be rehabilitated by Islamic authorities are forced to dress and act as Muslims.

If ever there was a phobia that we’re experiencing in Malaysia, it’s not Islamophobia. Its Apostophobia (fear of apostates). A fear or hateful stand that is usually swept under the carpet since everyone is bent of protecting the sensitivities of Muslims…

All of this just shows you how difficult it is to be an open atheist in a supposedly “free” nation that’s still dominated by Islamic beliefs, even if it’s not a Muslim theocracy. 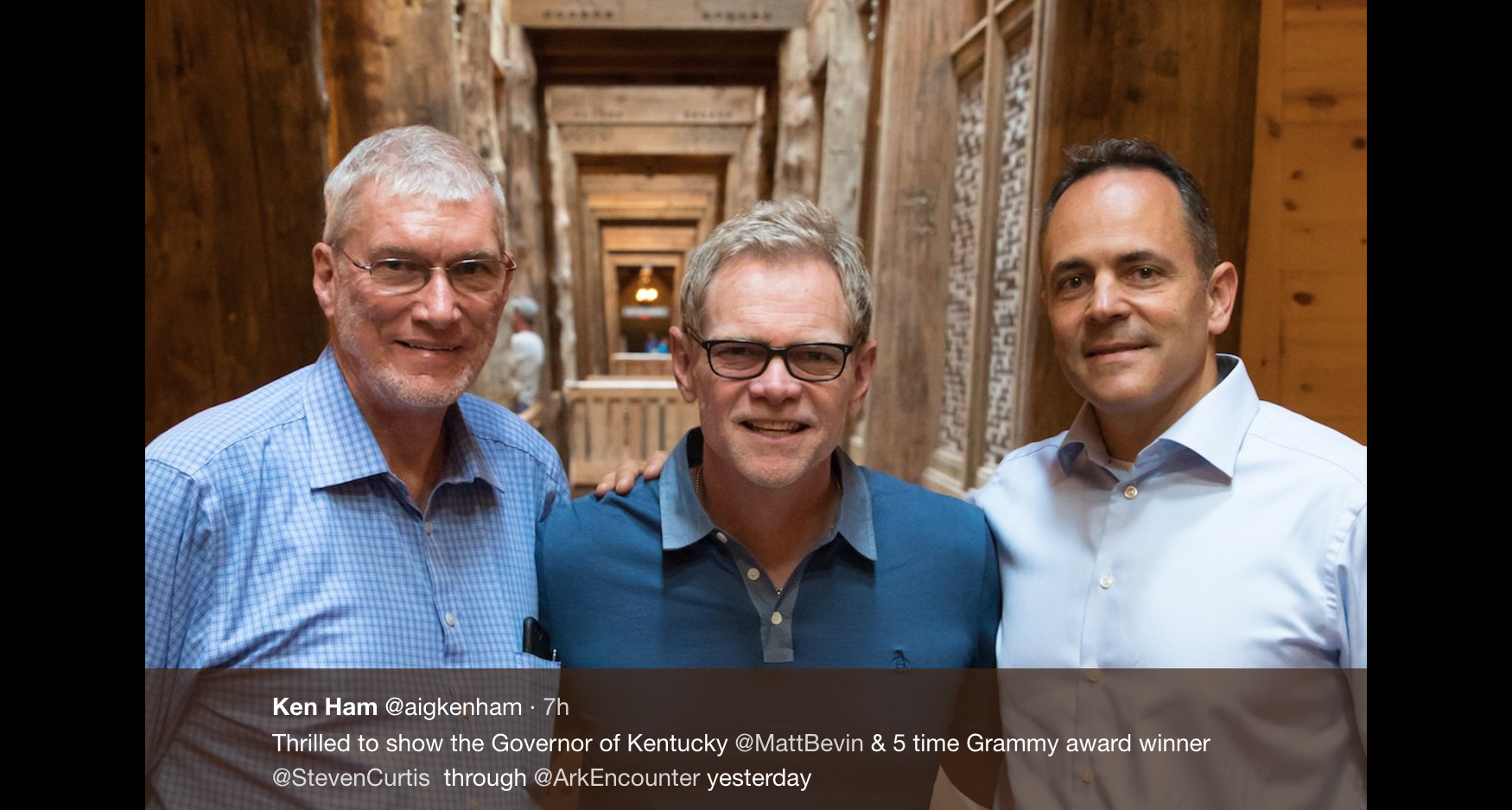 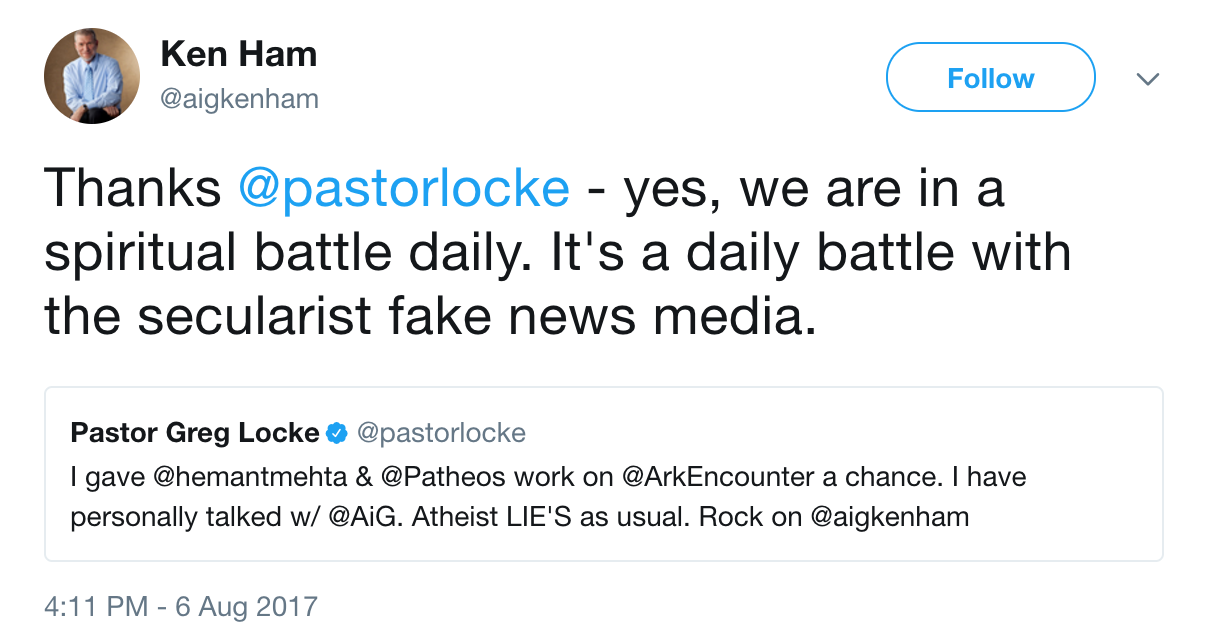