Remember a few weeks ago when this picture surfaced of a number of Christian Right leaders laying their hands on Donald Trump?

Such an honor to pray within the Oval Office for @POTUS & @VP . pic.twitter.com/JrDOSJyFeN

One of the men in that room was Pastor Rodney Howard-Browne, who said days later that the prayer was intended as a way to thwart an attack on the President by his enemies. He was tipped off to the impending attack, he said, by a member of Congress.

“There is a planned attack on our president,” he said, “and that’s all I can tell you about right now; I know what I’m talking about, I’ve spoken to high-ranking people in the government and this is being planned by people that hate God, hate America, hate our president and we have to stop this, in Jesus name.”

The Secret Service doesn’t take those kinds of comments lightly, and they recently visited the home of Howard-Browne to get more details about this “planned attack.” And surprise, surprise — he had nothing to tell them.

He explained all this to End Times broadcaster Rick Wiles on his “TruNews” show:

“Somebody reported me to the Secret Service, so they came over” he claimed. “Three guys, we sat and talked; very nice people and they wanted to know who the congressman was. I said, ‘I can’t tell you that, it was pastoral privilege.’ I said, ‘I prayed for him’ and he said, ‘So, it was like a confession?’ I said, ‘Yeah, I can’t tell you. I’m not going to tell you, I can’t tell you, it’s impossible.’”

“If the Secret Service in Washington, D.C., don’t know what’s coming down, then why should somebody from Tampa?” Howard-Browne added. “This is a senior member of Congress. If he actually knew anything, he would inform the Secret Service himself. It’s not my problem.”

There’s a famous story/joke religious people tell about a man who’s stuck on his roof during a flood. When people keep coming to rescue him — with boats and helicopters — he rejects their help and says God will protect him. He eventually dies. In Heaven, he asks God what happened, and God tells him He tried to help! He sent all those boats and helicopters, didn’t He?

Howard-Browne is in the same situation. He claimed there was a danger so bad that his Trump-touching prayers could resolve… and when the Secret Service asked for information, he refused to help. Maybe he was lying. Maybe he genuinely didn’t want to say anything.

Either way, if something does happen to Trump, you have to wonder what Howard-Browne would say then. Maybe he’ll ask God one day why He didn’t step in to protect the President, and God will respond, “What the hell are you talking about? I sent the Secret Service!”

August 1, 2017
A Michigan Cottage Town Says Only Christians Are Allowed to Own Property There
Next Post 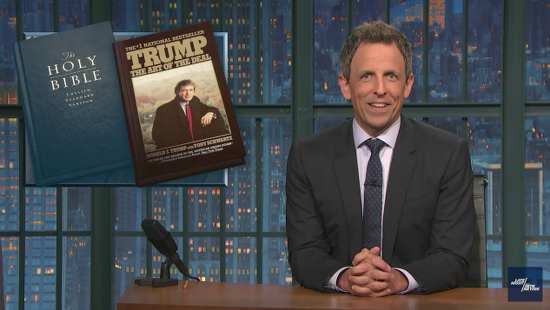