The Boy Scouts Are Inching Closer To Accepting Girls (But Not Atheists) July 17, 2017 Hemant Mehta

It was two years ago when the Boy Scouts of America finally ended its irrational ban on gay scout leaders. With that decision, discrimination against gay members in the organization was officially over. (That is, unless your troop was affiliated with a conservative church, in which case banning gay leaders was still acceptable, but you get the idea).

The Mormon Church responded by threatening to sever all ties with the organization, which would have been a devastating blow considering the LDS Church served “more than 427,000 boys in nearly 38,000 troops.” They had no problem with gay scout leaders, but if those leaders were in same-sex relationships or acted on their desires, the Mormons wanted nothing to do with them.

Earlier this year, the Boy Scouts took another big step when officials said transgender boys would also be accepted. (The Mormon Church responded by pulling the plug on some of their largest partnerships with the Scouts.)

And now the Boy Scouts may be taking another unprecedented step by accepting girls into the organization.

They’ve been hinting at this over the past few months as a way to “meet the needs of today’s families.” Which is to say that it’d be a lot easier for parents (especially single parents) to enroll their kids in the Scouts if they could drive their boys and girls to the same place.

To be sure, girls are already allowed in some Boy Scouts programs. Just not the traditional ones most people are familiar with.

Girls are currently part of four scouting programs already: Venturing and Sea Scouting, which is oriented toward outdoor activities; Exploring, a career-oriented mentoring program; and STEM, which focuses on science and math.

… scouting leaders will discuss whether to open up more programs to girls and even whether to create some girls-only programs within the Boy Scouts, according to one scouting official. Some local scouting leaders said they thought admitting girls to most other scouting programs might also be discussed, including whether to allow girls to earn the highest rank of Eagle Scout.

In case you think this is all ridiculous, you should read the Change.org petition started a couple of years ago by a New York teenager, Sydney Ireland. She listed the reasons why exclusion from the Boy Scouts was effectively shutting her out of a lot of opportunities:

I cannot change my gender to fit the Boy Scouts’ standards, but the Boy Scouts can change their standards to include me. I am determined to be an Eagle Scout. It isn’t just a hobby, it’s access to some of the best leadership training there is.

The facts say it all — high-level Scouting creates opportunity, and with opportunity comes a chance at success in the global community.

More to the point: Is there really a reason for the Boy Scouts to segregate by gender when it comes to teaching skills like leadership and service and character development? That might have gone without question more than a century ago when the BSA began, but we’ve come a long way since then. And if the Boy Scouts are slowly becoming more inclusive, what’s the argument for excluding a large segment of the population that wants to be involved in the work they do? (The Girls Scouts, it should be noted, is a separate organization that focuses on different areas. It’s not like they’re under the same umbrella. That’s why the simplistic rebuttal of “Let girls join Girl Scouts” doesn’t make much sense.)

Enrollment in the Scouts has also been dropping faster than ever, all the more reason for the organization to find ways of recruiting new members.

And they seem to finally be showing signs of receptiveness.

A commenter at the SCOUTER forum (for local leaders) posted about an email he received over the weekend about upcoming meetings to discuss future changes… that gave no indication at all about what those changes would be.

… I am pretty sure that what the [Scout Executive] will be discussing at this meeting is the admission of girls to Cub and Boy Scouting. But it’s not like the letter actually says that or anything. I think many of my fellow nearby Scouters are going to look at this and decide they do not wish to spend a couple of hours in the middle of the summer (when they might be on vacation and/or at summer camp and unable to attend anyway) discussing “how to make Scouting more accessible to today’s families.”

… are they really interested in “gaining my perspective” (on a topic that they are not actually identifying before the meeting), or is this really part of a nationwide rollout of a decision that they’ve made already? Do they really want my opinion, or are they just going to try to sell me on what they’re going to do anyway? (These are mainly rhetorical questions.)

The Samoset Council in Wisconsin was even more explicit about the upcoming meetings on their website: 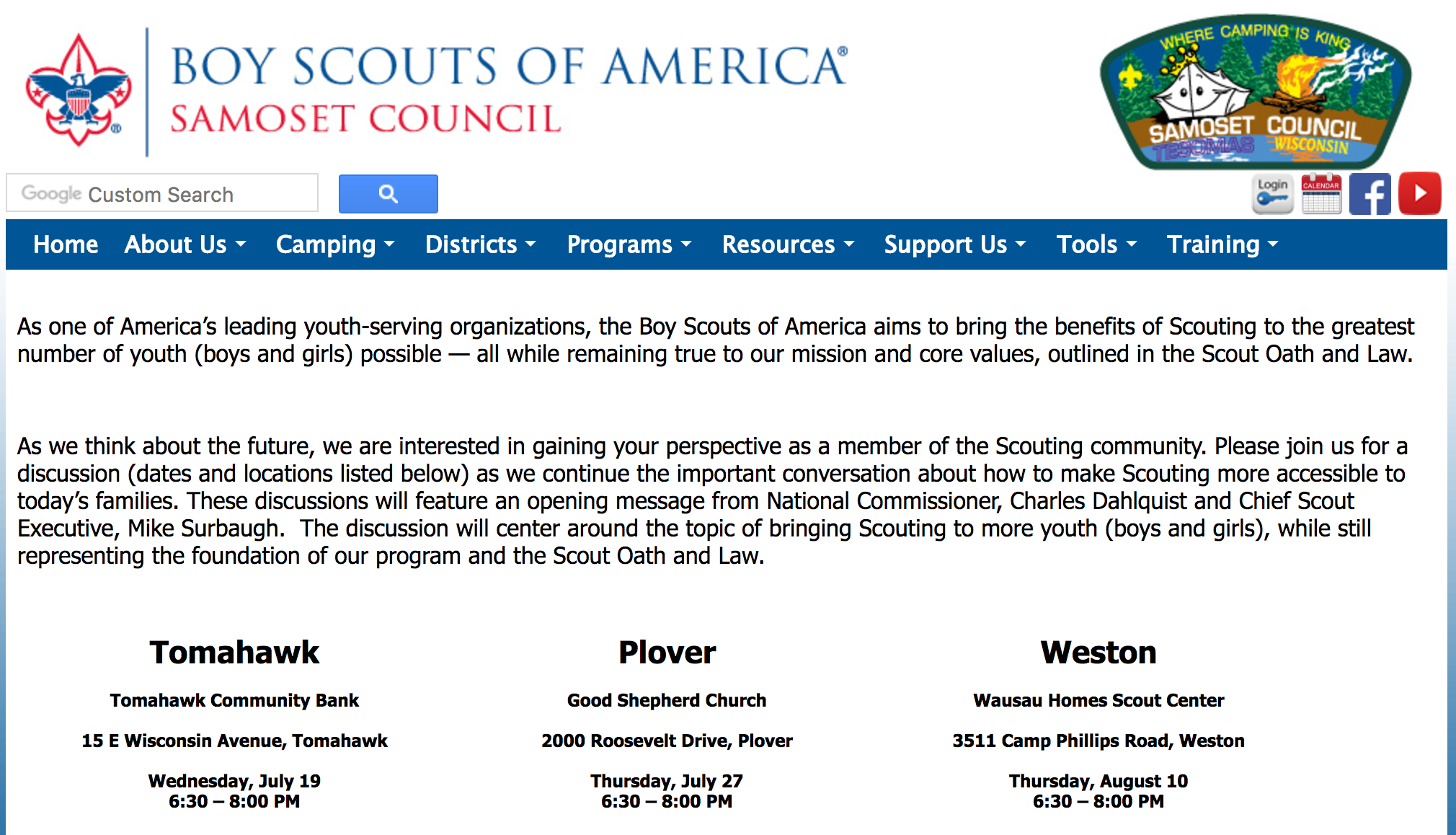 As one of America’s leading youth-serving organizations, the Boy Scouts of America aims to bring the benefits of Scouting to the greatest number of youth (boys and girls) possible — all while remaining true to our mission and core values, outlined in the Scout Oath and Law.

As we think about the future, we are interested in gaining your perspective as a member of the Scouting community. Please join us for a discussion (dates and locations listed below) as we continue the important conversation about how to make Scouting more accessible to today’s families… The discussion will center around the topic of bringing Scouting to more youth (boys and girls), while still representing the foundation of our program and the Scout Oath and Law.

I’m not sure if that phrasing was accidental or not, but it suggests that change may be happening sooner than anyone thinks. If that’s the case, more power to the Boy Scouts — especially since the backlash will inevitably be swift. (Just think of the Fox News segments.)

It has to be said, though, that this means the Boy Scouts will accept girls before they accept atheist boys. As reader Brian pointed out to me, the Scouts are on the verge of accepting two of the three G’s: Gays, Girls, and the Godless. Atheists are still shut out from membership and leadership. The Scouts may have the right to do that, but it doesn’t mean they’re making a wise decision.

The BSA’s argument is that Scout Law requires members to be “reverent” while the Scout Oath includes the line, “I will do my best to do my duty to God.” But if they’re willing to do away with their traditions to include girls — and they should — then why won’t they budge on the requirement that members believe in God?

There’s no reason to think belief in a Higher Power is a prerequisite of having good character or being a great leader, and it’s about damn time the BSA acknowledges that within their organization.

July 17, 2017
An Israeli Christian Allegedly Murdered His Teen Daughter for Dating a Muslim
Next Post