Self-described Christian prophet Cindy Jacobs has a habit of — get this — lying to her audiences. Like the time she helped a woman grow three inches instantaneously, and the time she turned metal into bone (literally), and the time she blamed the death of blackbirds on the repeal of Don’t Ask, Don’t Tell, and the time she commanded the clouds to move during a photo shoot because she had “authority over the weather.”

It turns out God speaks to her in Spanish, too. Because when she was on her way to preach recently, the Lord said to her, “Basta!”

She explained it on The Jim Bakker Show and this screenshot is literally what they showed on the screen: 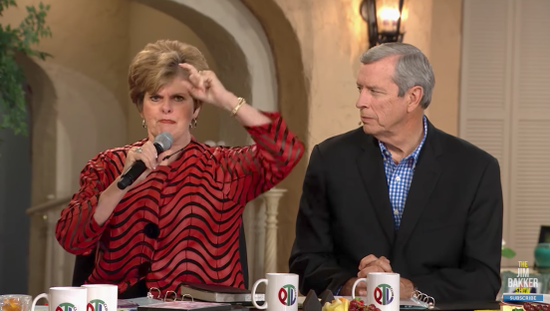 That’s interesting. Because I say the same thing every time I hear Jacobs talk.

Maybe, just maybe, God was telling her to stop lying to people by claiming to speak on His behalf.

She didn’t list that as an option. I don’t know how she missed it.

(via Charisma. Portions of this article were published earlier)

July 14, 2017
Why Are Mean Doctors Being So Unfair To Nice Gwyneth Paltrow?
Next Post