Atheist’s Car Vandalized With Rock That Reads “God Is Good”

Anthony Erb is a 42-year-old atheist from Phoenix who has no problem sharing his non-religiosity with other people. He works with an Atheists Helping the Homeless chapter in the area. He occasionally wears atheist shirts. And he has an atheist symbol on the back of his car.

Yesterday, maybe because of that symbol, someone threw a rock through his car’s back window, shattering the glass where it hit.

We don’t know who did it… but the rock had the message “God is good” written on it. So take a wild guess. 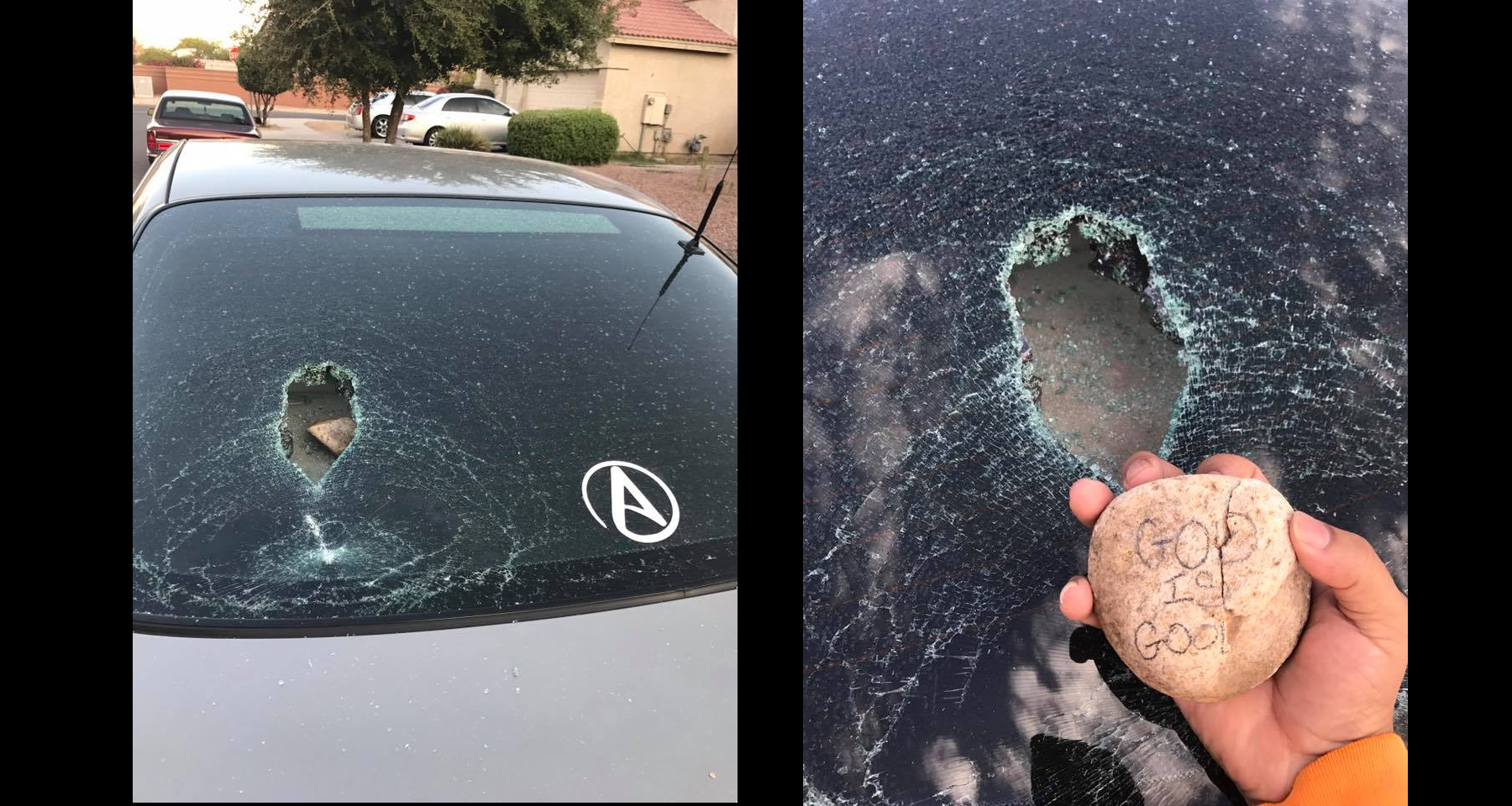 And what message is it supposed to send when someone damages your car in an effort to remind you God is good? Whoever did it didn’t think this one through.

He told me last night that he wasn’t too concerned about the damage because he had insurance for the car (so paying for a replacement window wasn’t an issue) and also because he had another car he could use to get to work. In fact, he was so late for work yesterday morning that he didn’t even bother calling the police about the crime. He just hopped in his other vehicle and started driving.

I told him that seemed like a strange reaction, and he elaborated a bit. He’d been through a not-so-great experience with a cop not too long ago, so he wasn’t eager to get them involved. And he wasn’t even a stranger to this kind of vandalism. He used to live somewhere else in Phoenix and had a car with a “Heathen” sticker on the back of it. Someone took a marker to that word, crossed it out, and left a message saying he was going to Hell. Another time, someone stole his stereo — that wasn’t connected to religion, but his point was that being a victim of this sort of crime wasn’t new for him.

Did he have any clue who did it? Nope. He said he gets along really well with everyone in his neighborhood — and religious people in general. He jokingly added, “I’d like to believe I’m the most popular atheist in Arizona,” because that’s how he’s usually treated by Christians in his community. They love him. Well… all but one, anyway.

Anthony, who works with his brothers, eventually came home early from work since there wasn’t anything urgent going on, and it was only then that he decided to pick up the rock from inside his car. That’s when he saw the “God is good” message and posted the images on Facebook.

I hope he contacts the police, though, because this is arguably a hate crime. Someone wrecked his car purely because of his (non-)religious beliefs. If you’re an atheist in Phoenix hearing about this, wouldn’t your first reaction be to take down any noticeable symbols or bumper stickers from your car? That’s precisely what you shouldn’t have to do.

Maybe the most disturbing thing about this whole story is how it had to be premeditated. Someone wrote that message on the rock before doing this. Vandalism is bad enough when it’s random. Whoever did this, however, targeted Anthony because of his atheism.

July 14, 2017 U.S. House Committee Passes Bill Letting Pastors Preach Politics from the Pulpit
Browse Our Archives
What Are Your Thoughts?leave a comment