We Protested Outside Ark Encounter On Its First Anniversary July 9, 2017 Hemant Mehta

We Protested Outside Ark Encounter On Its First Anniversary

I spent yesterday afternoon in Williamstown, Kentucky, where a group of about 75 science supporters (including a handful of religious people) were protesting outside Ark Encounter on its first anniversary.

The point wasn’t to shut down the attraction or bother the families visiting the Ark on a Saturday in the summer. It was to remind the community that Ark Encounter had taken advantage of them — with tax breaks galore and without the jobs for everybody that they initially promised — and that the story it offered was about as far from science as anyone could get. 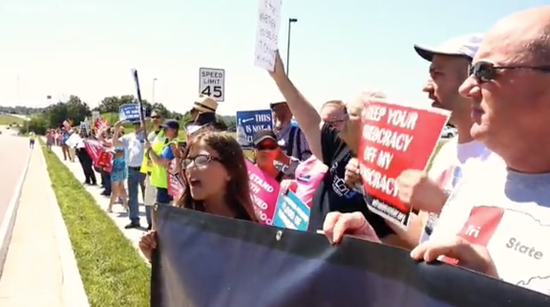 Mehta joined several guests, including two religious speakers, in denouncing the Bible-themed attraction. His opening one-liner: “It’s been one year since this ark opened, which is about 14 seconds in creationist time.”

The detractors warmed up a crowd of about 75 demonstrators before they marched — two-at-a-time à la the Genesis story — to the front gate of the park. All the way garnering some horn honks, a few curious expressions, and at least one middle finger.

You can see my Facebook Live videos from the event below — as well as the speech I gave (with transcript).

It’s been one year since this Ark opened — which is 14 seconds in Creationist time — and I think it’s fair to ask a simple question: Was it worth it?

Even on Ken Ham’s terms, the answer is no. Just look at the acceptance of Young Earth Creationism. A Gallup poll from this past May shows that acceptance of evolution — without God playing a role in the process — is higher today than it’s ever been. And people who believe we were created just like this a few thousand years ago? Lower than ever before.

The bad news is that that acceptance of godless evolution is at 19%. Young Earth Creationists are 38%. So we still have a long way to go. But we’re moving in the right direction.

Is it worth it for the community? No. And that’s worth talking about in some detail.

There are people here who can do an incredible job of telling you why the contents of the Ark and everything inside the Creation Museum are complete nonsense. And I hope more of those voices speak out because there is a lot of disturbing material inside.

I thought it would be more useful to tell you about all the problems we’ve seen outside the Ark. Because Ken Ham and Answers in Genesis have created a lot of problems for people in this community. They’ve lied. They’ve broken promises. They’ve asked for favors and given virtually nothing back in return.

If you were dating Ark Encounter, you would’ve broken up with him a long time ago.

— The park was built here because Grant County sold 98 acres of land to Ark Encounter for a grand total of $1. That’s a lot of money on the table the county did not receive.

— The city of Williamstown gave Ark Encounter a $62 million interest free loan and a 75% break in property taxes over the next 30 years. Whatever money would normally be going back into the community is instead going to helping Ham pay off the loans.

— Every employee who works here pays a 2% job assessment fee on their gross wages. That means $2 out of every pre-tax $100 they make goes to helping Ken Ham pay off this park instead of going into the employees’ pockets and back into the community.

— The state of Kentucky is giving Ark Encounter a 25% break in sales taxes over the next 10 years possibly worth more than $18 million. That means 25% of all sales taxes collected on tickets, souvenirs, and food will be given back to the Park, not the state, over the next decade.

And all of this is happening even as Ken Ham has said multiple times that, “No money will be taken out of the state’s budget to fund the Ark.”

— Ark Encounter promised that they would create so many jobs for the people of Grant County, in part to get all these perks. What they didn’t say when they made that promise was that those jobs would only be available to you if you agreed that world was created a few thousand years ago, that Adam and Eve were real, that gay people don’t have legitimate marriages, and that being transgender is “sinful and offensive” to God. Not only were Jews and atheists shut out of these jobs, Christians who respect science and have a tolerant heart couldn’t get them either.

— Ark Encounter has offered public schools a sweetheart deal to bring kids to this place. It would cost $1 per student with adults in for free. As a former teacher, that’s tough to pass up. What Ark Encounter won’t tell you is that they won’t pay the penalty for the lawsuit you would eventually lose if you brought your students to this Christian ministry. By the way, a $1 admission fee is still $1 too much.

— And just in the past few weeks, Ark Encounter has tried to get out of paying a $0.50 per ticket “safety fee” to the city of Williamstown — to help the city upgrade its emergency response equipment — because they say they’re a religious ministry. That’s approximately $700,000 that the city would not be getting for safety equipment because Ark Encounter can’t decide if it’s a religious ministry or a for-profit Ark which they said they were to get all those sweet deals.

As one internet commenter put it, Ham loves his pork.

Let’s step outside this Ark, though.

Has the Ark been worthwhile for the local economy? The reason for all these sweet deals was that it was supposed to help the businesses in the area. Has it? No! Local hotels are not sold out. You can get a seat in any restaurant you visit.

It’s so bad that Grant County residents recently voted to turn this from “moist” town with limited alcohol sales to a “wet” town where most restaurants could get an alcohol permit. And it still didn’t help.

Listen: If alcohol doesn’t make this place more appealing, nothing will.

Let me quote Steve Wood, a Grant County judge/executive who is also a Republican:

— And why haven’t things gotten better? In part, because Answers in Genesis has overpromised and underdelivered with attendance. In 2014, Ken Ham said Ark Encounter would bring in 2 million visitors a year. Last month, he said it’d be closer to 1.1 million visitors.

I know Ark Encounter has a habit of taking numbers and lowering them beyond belief, but it’s just sad when you spend about $100 million and barely crack a million people.

Why would next year be better? The die-hards have already seen it, we’ve already mocked it, the press has nothing new to write about, the exhibits aren’t changing because Creationism never improves, the information is just plain wrong, the cost to get in is obscenely high ($136 for a family of four, not including tax), and this isn’t the sort of “museum” where you learn more on repeat trips.

Ken Ham is the Joe Camel of Creationism. He wants to lure in kids and get them hooked on his brand of BS. He sells all sorts of products designed to mess with your mind. He ignores all the evidence he doesn’t like.

He’s bad for you. And we need to help people quit the habit.

To quote the Liberal Redneck Trae Crowder, they didn’t need to waste $100 million on this Ark. For $100, I’ll “take you to a cow pasture, you can smell the BS, and we’ll call it a day!”

Many thanks to the Tri-State Freethinkers for organizing the wonderful event. I loved seeing their Adopt-a-Highway sign just outside the Ark: 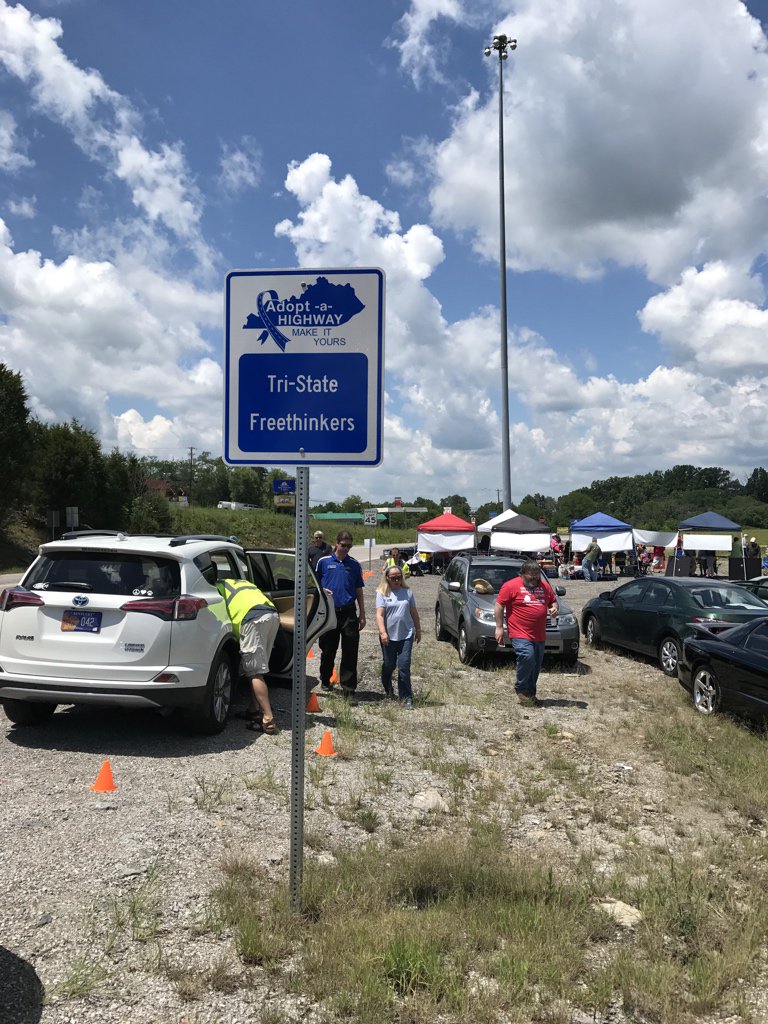 Now that’s clever marketing — and, unlike the Ark, it’s actually helping the community. 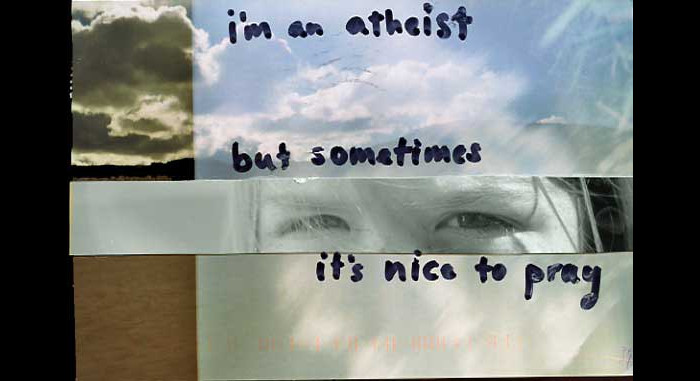 July 9, 2017
How Many Atheists Still Resort to Prayer for Comfort?
Next Post 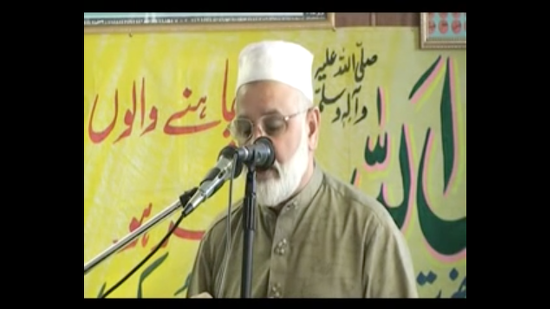