The Supreme Court voted 7-2 yesterday to overturn a lower court’s decision in Trinity Lutheran Church v. Comer, saying that Missouri officials were wrong to exclude a qualified church when they made grant money available for the renovation of playgrounds.

While the decision appeared to be limited in scope, there’s a worry that this will pave the way for taxpayer money being used to support other church activities that aren’t directly connected to the promotion of Jesus.

What amazed me, though, was Justice Sonia Sotomayor‘s blistering dissent. Speaking on behalf of only one other colleague, she not only rebutted the main points of the church’s defenders, she also made a strong case for church/state separation.

I posted parts of her dissent yesterday, but some of her words may have gotten lost with some of the other news stories out there, so here are the biggest takeaways from her decision:

Trinity Lutheran, Sotomayor writes, “operates… for the express purpose of carrying out the commission of… Jesus Christ as directed to His church on earth.” That’s what they do. It’s all about God.

So even when you’re doing something as ostensibly secular as renovating a playground, think about what that accomplishes. It makes the church more appealing for parents considering which church to attend. Kids are more excited to be there. Money that would’ve gone toward the playground’s renovation can now be spent on mission trips.

How can anyone possibly think giving the church money could ever be a secular act?

The Church seeks state funds to improve the Learning Center’s facilities, which, by the Church’s own avowed description, are used to assist the spiritual growth of the children of its members and to spread the Church’s faith to the children of nonmembers. The Church’s playground surface — like a Sunday School room’s walls or the sanctuary’s pews —
are integrated with and integral to its religious mission. The conclusion that the funding the Church seeks would impermissibly advance religion is inescapable.

We know that the government funds some religious charities that do work benefitting the general good. That’s what the whole “faith-based initiatives” controversy has always been about, because some of those organizations still discriminate in hiring. However, those charities have to promise that none of the money they receive will be used for proselytizing.

Sotomayor made clear that Trinity Lutheran made no such promise.

True, this Court has found some direct government funding of religious institutions to be consistent with the Establishment Clause. But the funding in those cases came with assurances that public funds would not be used for religious activity, despite the religious nature of the institution.

The Church has not and cannot provide such assurances here… The Church has a religious mission, one that it pursues through the Learning Center. The playground surface cannot be confined to secular use any more than lumber used to frame the Church’s walls, glass stained and used to form its windows, or nails used to build its altar.

In a footnote, she added:

The Scrap Tire Program requires an applicant to certify, among other things, that its mission and activities are secular and that it will put program funds to only a secular use… From the record, it is unclear whether the Church provided any part of this certification… In any case, the Church has not offered any such assurances to this Court.

Remember: All of this stems from a Missouri program that collected a small fee from the sales of new tires, some of which was allocated for renovating playgrounds. In 2012, 44 groups (including Trinity Lutheran) applied for the grant money. Sotomayor noted that the application and decision process favored groups that had the ability to promote the government’s work.

And the Court’s decision means they’re favoring larger churches over smaller ones.

[The Court’s decision] favors certain religious groups, those with a belief system that allows them to compete for public dollars and those well-organized and well-funded enough to do so successfully.

That sentence goes to a footnote which reads:

This case highlights the weaknesses of the rule. The Scrap Tire Program ranks more highly those applicants who agree to generate media exposure for Missouri and its program and who receive the endorsement of local solid waste management entities. That is, it prefers applicants who agree to advertise that the government has funded it and who seek out the approval of government agencies. To ignore this result is to ignore the type of state entanglement with, and endorsement of, religion the Establishment Clause guards against.

To put that another way, small churches and secular groups that don’t have the resources of a large megachurch are at an incredible disadvantage when it comes to applying for these grants. With the Court’s decision, those small churches will have an even harder time “competing” for these opportunities.

The use of public funds to support core religious institutions can safely be described as a hallmark of the States’ early experiences with religious establishment. Every state establishment saw laws passed to raise public funds and direct them toward houses of worship and ministers. And as the States all disestablished, one by one, they all undid those laws.

Those who fought to end the public funding of religion based their opposition on a powerful set of arguments, all stemming from the basic premise that the practice harmed both civil government and religion. The civil government, they maintained, could claim no authority over religious belief. For them, support for religion compelled by the State marked an overstep of authority that would only lead to more. Equally troubling, it risked divisiveness by giving religions reason to compete for the State’s beneficence. Faith, they believed, was a personal matter, entirely between an individual and his god. Religion was best served when sects reached out on the basis of their tenets alone, unsullied by outside forces, allowing adherents to come to their faith voluntarily. Over and over, these arguments gained acceptance and led to the end of state laws exacting payment for the support of religion.

After spending several long paragraphs detailing examples of this entanglement being undone in states where it was initially permitted, Sotomayor summarized the lesson we should be taking away from this:

The course of this history shows that those who lived under the laws and practices that formed religious establishments made a considered decision that civil government should not fund ministers and their houses of worship. To us, their debates may seem abstract and this history remote. That is only because we live in a society that has long benefited from decisions made in response to these now centuries-old arguments, a society that those not so fortunate fought hard to build.

Sotomayor didn’t have to explain this. She just let the footnote speak for itself. 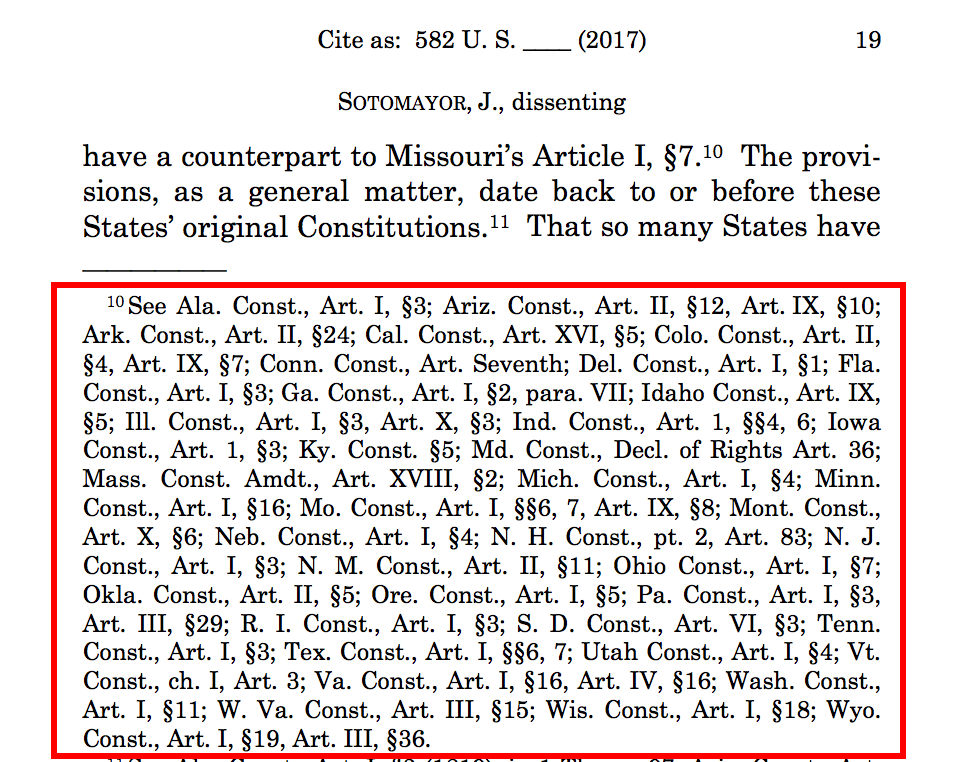 She added that these provisions “date back to or before these States’ original Constitutions.” And then she included another footnote with some dates. 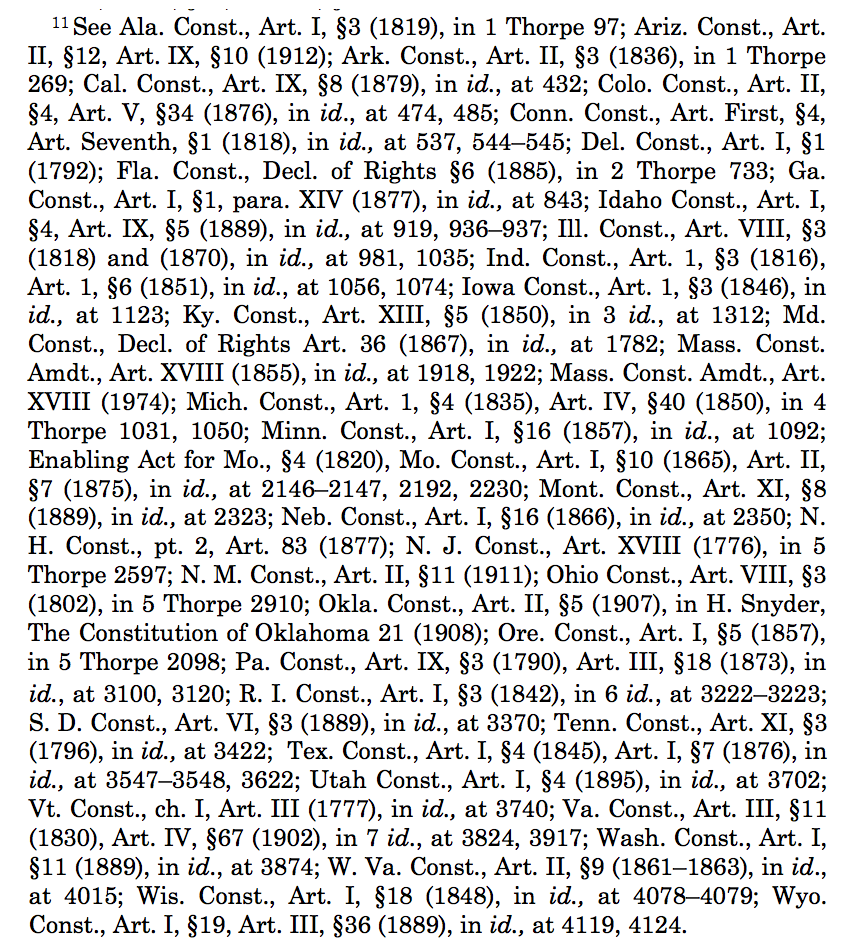 That’s a stunning way of saying we’ve dealt with this issue before many, many times over the course of our nation’s history, and yet we’re ignoring all of that collective wisdom with this decision.

History shows that the Religion Clauses separate the public treasury from religious coffers as one measure to secure the kind of freedom of conscience that benefits both religion and government.

If this separation means anything, it means that the government cannot, or at the very least need not, tax its citizens and turn that money over to houses of worship. The Court today blinds itself to the outcome this history requires and leads us instead to a place where separation of church and state is a constitutional slogan, not a constitutional commitment.

Can justices do mic drops?

Normally, justices who lose a case close their opinions with the words, “I respectfully dissent.”

Not Sotomayor. Not in this case. She wrote, simply, “I dissent.”

That’s some cold-blooded shade right there.

Given the makeup of the Court, we’re lucky that Sotomayor is a proud defender of the wall between church and state. If only her conservatives colleagues would stand up for the First Amendment the same way they do the Second. 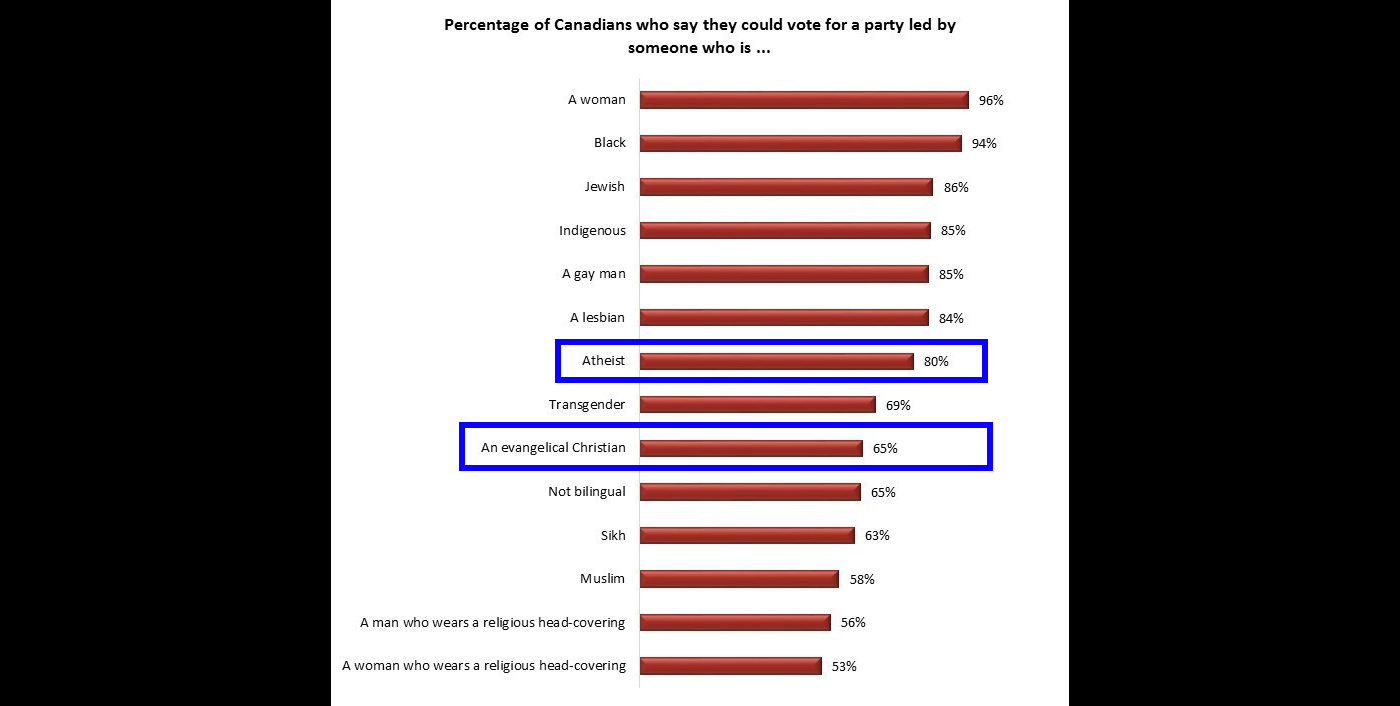 June 27, 2017
Canadians Would Rather See an Atheist Prime Minister Than an Evangelical One
Next Post

June 27, 2017 Trump's Lawyer Pressured Poor People Into Giving His Groups Money. (For Jesus.)
Browse Our Archives
What Are Your Thoughts?leave a comment