An Ex-Mormon Gave Her Visiting Teacher an Incredible Answer As To Why She Left the Faith May 24, 2017 Hemant Mehta

A former Mormon named Kelly recently got a text from a Visiting Teacher (basically, someone from the Church tasked with keeping tabs on her about once a month and helping them with any spiritual needs).

But Kelly was no longer a believer. So she politely told the woman she wasn’t interested in her help… to which the teacher asked, if Kelly didn’t mind answering, why she left the Church.

When you open a door that wide… 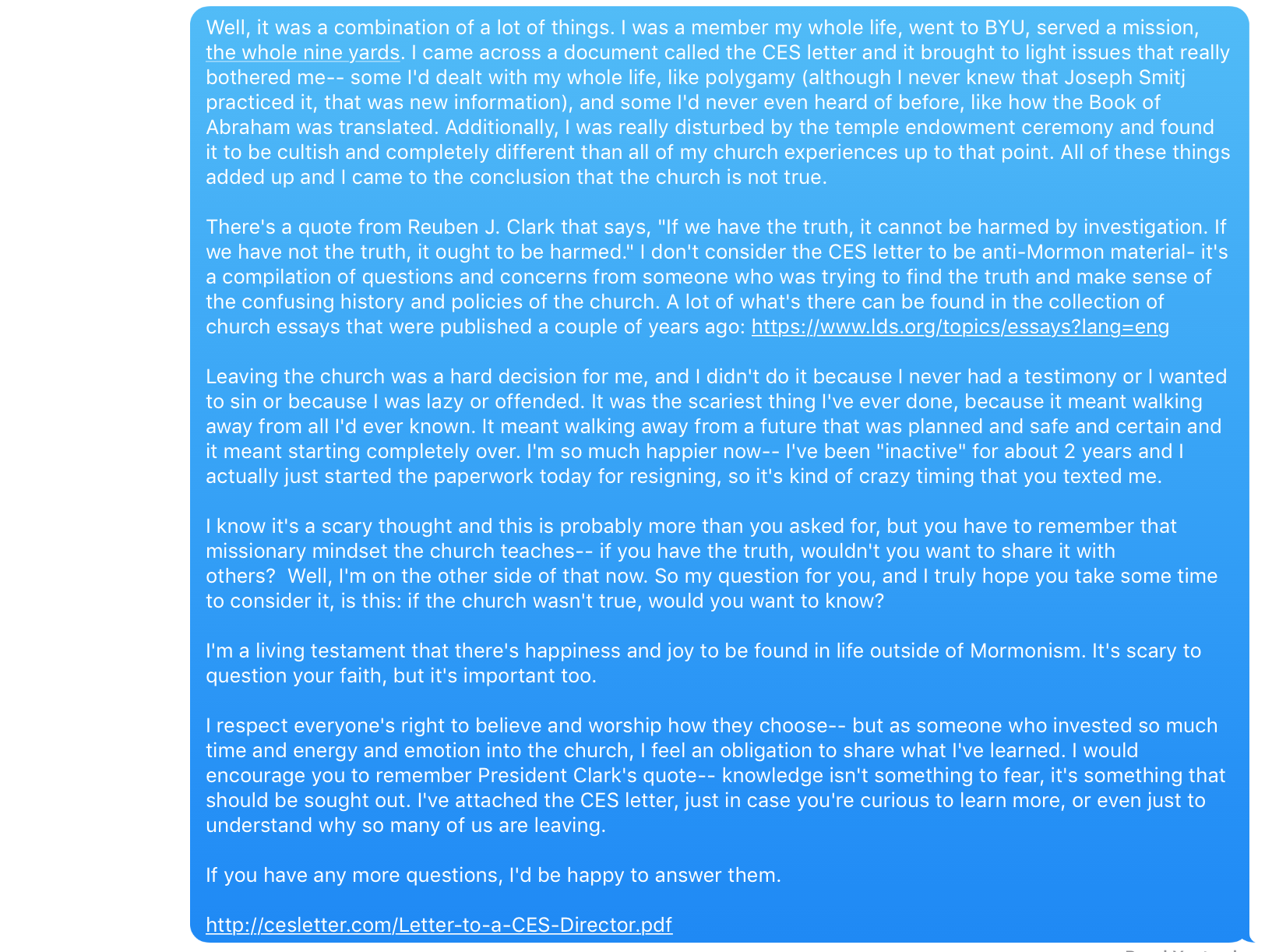 Well, it was a combination of a lot of things. I was a member my whole life, went to BYU, served a mission, the whole nine yards. I came across a document called the CES letter and it brought to light issues that really bothered me — some I’d dealt with my whole life, like polygamy (although I never knew that Joseph Smith practiced it, that was new information), and some I’d never even heard of before, like how the Book of Abraham was translated. Additionally, I was really disturbed by the temple endowment ceremony and found it to be cultish and completely different than all of my church experiences up to that point. All of these things added up and I came to the conclusion that the church is not true.

There’s a quote from Reuben J. Clark that says, “If we have the truth, it cannot be harmed by investigation. If we have not the truth, it ought to be harmed.” I don’t consider the CES letter to be anti-Mormon material– it’s a compilation of questions and concerns from someone who was trying to find the truth and make sense of the confusing history and policies of the church. A lot of what’s there can be found in the collection of church essays that were published a couple of years ago: https://www.lds.org/topics/essays?lang=eng

Leaving the church was a hard decision for me, and I didn’t do it because I never had a testimony or I wanted to sin or because I was lazy or offended. It was the scariest thing I’ve ever done, because it meant walking away from all I’d ever known. It meant walking away from a future that was planned and safe and certain and it meant starting completely over. I’m so much happier now — I’ve been “inactive” for about 2 years and I actually just started the paperwork today for resigning, so it’s kind of crazy timing that you texted me.

I know it’s a scary thought and this is probably more than you asked for, but you have to remember that missionary mindset the church teaches — if you have the truth, wouldn’t you want to share it with others? Well, I’m on the other side of that now. So my question for you, and I truly hope you take some time to consider it, is this: if the church wasn’t true, would you want to know?

I’m a living testament that there’s happiness and joy to be found in life outside of Mormonism. It’s scary to question your faith, but it’s important too.

I respect everyone’s right to believe and worship how they choose — but as someone who invested so much time and energy and emotion into the church, I feel an obligation to share what I’ve learned. I would encourage you to remember President Clark’s quote — knowledge isn’t something to fear, it’s something that should be sought out. I’ve attached the CES letter, just in case you’re curious to learn more, or even just to understand why so many of us are leaving.
If you have any more questions, I’d be happy to answer them.

That’s an incredible response. I’m sure it felt good to send it.

And guess what? The teacher responded.

It’s not really a rebuttal to anything Kelly wrote. It reads more like a testimony about how we can’t know everything, how coincidences can’t possibly be real, and how it’s so much harder to believe in God than the alternative.

But it’s not proselytizing, and she didn’t condemn Kelly for her decision. Given the situation, that might be the best thing Kelly could have hoped for.

If only everyone who left a church could say something like this to the leaders who wonder why they left. 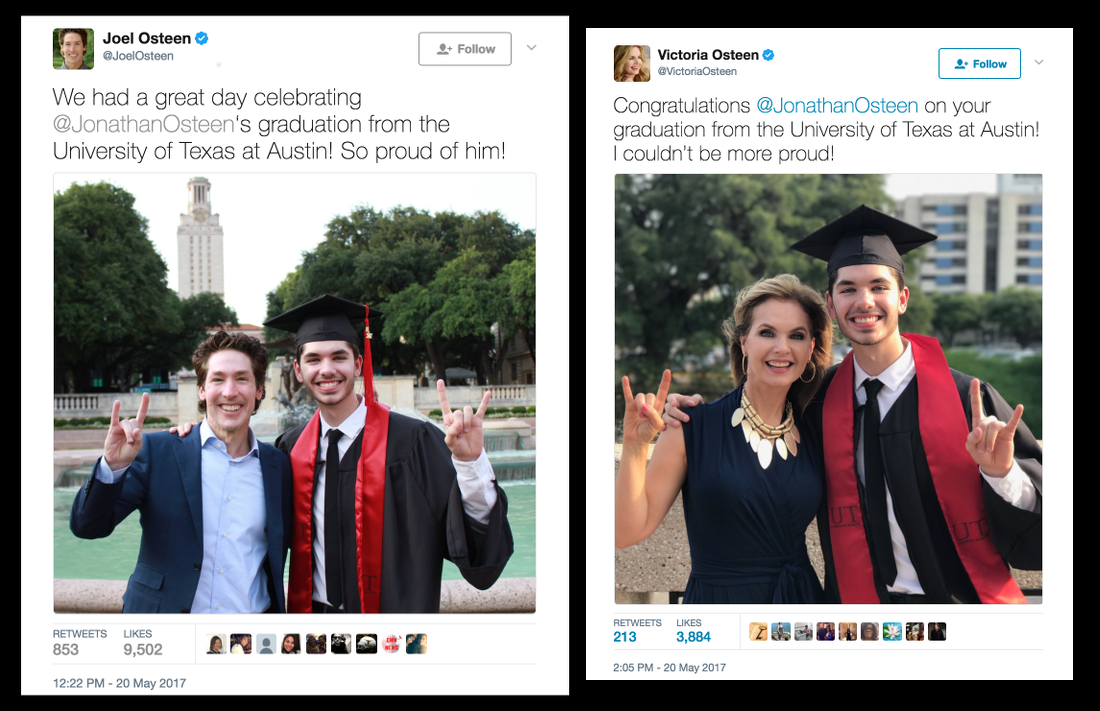 May 24, 2017
Joel Osteen Under Fire for Making Texas Longhorns Gesture After Son's College Graduation
Next Post 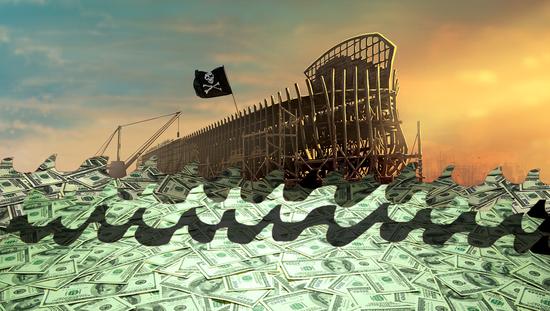 May 24, 2017 Ark Encounter Has Been Bad News for the People of Williamstown, Kentucky
Browse Our Archives
What Are Your Thoughts?leave a comment