Yesterday, Answers in Genesis announced that one of their Creationist geologists, Dr. Andrew Snelling, had filed a lawsuit against Grand Canyon National Park after he was “denied a permit to remove rock samples from the Grand Canyon… due to his religious beliefs.” Snelling (below) is represented by right-wing legal group Alliance Defending Freedom.

Dr. Snelling commented, “This case is all about giving the freedom for a scientist to do good science without having to undergo a religious litmus test. The samples I have been blocked from collecting in the GCNP are to be subjected to routine lab processing and investigations any good scientist would perform. The results are to be openly reported for all scientists to draw their own conclusions, whether they agree with my worldview interpretation of the history of the Earth.”

Regarding the park’s censorship, Dr. Snelling added: “We expect debate about what the evidence means, but the park shouldn’t prevent us from collecting data just like other scientists. I am merely asking for equal treatment by the government.”

On the surface, this raises an interesting question, and it’s the one Answers in Genesis wants people to ask: If a Creationist wants to conduct scientific research, should the government get in his way? It’s very tempting to respond with, “Of course not!”

But the reality is that Snelling isn’t conducting legitimate scientific research. It’s worth going through his personal history and what this lawsuit is all about to understand that.

First, a little background on Snelling. He earned a doctorate in geology from the University of Sydney in 1982, and published peer-reviewed research in mainstream publications for much of the next decade. All that seems well and good.

Here’s what’s weird: In those same years, he was publishing articles in Creationist publications in which he tossed aside any mention of rocks being “millions of years” old.

So what does he really believe?

Paleontologist Dr. Alex Ritchie wrote about this discrepancy in a 1991 issue of The Skeptic, referring to the man as Snelling 1 (the Creationist) and Snelling 2 (the real scientist). He wondered: which one was the real Dr. Snelling?

Why would someone have these two identities? Presumably because Snelling 2 gets all the prestige and credibility of being a published scientist… and Snelling 1 can then use that cachet to boost his own reputation. (The world is 6,000 years old, and I know what I’m talking about because I’m a peer-reviewed Ph.D. in the field!)

It also means Snelling was lying every time he wrote articles referencing time spans longer than a few thousand years. (It wouldn’t be the first time a Creationist felt he had to play the game, so to speak, to earn the respect of mainstream scientists.)

Now why is he suing?

“Scientists will always look at data and challenge one another’s interpretations of the information,” said ADF Senior Counsel Gary McCaleb. “Such disagreement is how science works. But when the government starts refusing access to even collect the information because it dislikes one scientist’s views, it undercuts science and violates the law. And this case perfectly illustrates why President Trump had to order executive agencies to affirm religious freedom, because Park officials specifically targeted Dr. Snelling’s religious faith as the reason to stop his research.” ADF Allied Attorney Michael Kitchen added, “The government isn’t allowed to discriminate against someone based on their viewpoint, and National Park officials have absolutely no legal justification in stopping a scientist from conducting research simply because they don’t agree with his views. Using someone’s views to screen them for a government benefit is unconstitutional.”

… Neither group, however, included the packet of exhibits in their press releases. I had to go hunting for that. And what you find in those exhibits is not discrimination against Snelling for being a Creationist.

What you find are credible scientists saying Snelling’s research proposal was so god-awful, that he shouldn’t be granted a permit and be allowed to waste the taxpayers’ time and resources.

Without getting into the details of his proposal — because the specifics are certainly over my head — Snelling wanted to do research in the Grand Canyon in 2013 and filed an application for permission. Part of that process includes getting your peers to review the proposal and essentially write a letter of recommendation. They have to say it’s relevant research with a good plan of attack.

Snelling responded with “three peer reviews of this project, each of which rated the project highly and commended it for approval.”

What the lawsuit doesn’t mention is that those three peer reviews came from Timothy Clarey (who works for the Institute for Creation Research), John Whitmore (who got his masters from ICR and now teaches at anti-evolution Cedarville University), and Raymond Strom (who has also worked with ICR).

In short, the only peer reviewers Snelling had on his side were his Creationist buddies. That’s like Donald Trump saying he hasn’t violated any ethics rules because his Cabinet and advisers can all vouch for him.

Snelling submitted all that documentation to Ronda Newton, the Research Permitting Coordinator for Grand Canyon National Park, and she must have had doubts about his proposal, because she asked University of New Mexico professor Dr. Karl Karlstrom for his thoughts on those peer reviewers.

Karlstrom wrote back (via email):

All these people represent the agressive [sic] approach of the Creation Science Institute — they put forward semi-reputable scientists who try to cast doubt on science. In these type of proposals, you have a hard job. They will cast them as reasonable by limiting the scope to the data and not mentioning conclusions or interpretations. Some of them have credentials of a sorts, but they use the “results” to bolster their avowed creationist agenda. Their web trails can be tricky and, for Whitmore, I could dig deeper to learn more about whether there is real science in there somewhere…

In a formal response, Karlstrom went into more detail about why the actual science behind Snelling’s proposal made little sense and was factually inaccurate. Snelling didn’t understand the topic he wanted to do research in, Karlstrom argued in great detail, before summarizing it like this:

My overall conclusion is that Dr. Snelling has no scientific track record and no scientific affiliation since 1982. I do not see this proposal as a scientifically valid research proposal. It is not well formulated based on current knowledge of Grand Canyon geology, the nature of microstructures of soft sediment structures in general, nor of the microstructures and mode of formation of monoclines. The proposed work does not seem to me to be of the scientific standard required for a Park research permit, and in any case, would not need to be done in Grand Canyon.

Damn… that’s a well-deserved slap in the face.

Newton then asked Dr. Peter Huntoon of the University of Wyoming for feedback on Snelling’s proposal — in part because his research was cited by Snelling. If anyone knew whether Snelling’s proposed research had any merit, it was Huntoon.

Huntoon’s response was even harsher.

Over the decades, individuals like Mr. Snelling have earned advanced degrees thus allowing them to be able to lay claim to being able to present themselves as scientists. The proposals forthcoming from them have become increasingly more sophisticated so that to the unwary they almost sound like science and they purport to use traditional scientific methodologies to carry out their work. But like the one at hand, the outcomes are clearly foregone. They then publish articles in their own growing body of literature. Thus the beat goes on. The objective is to create doubt, not among scientists, but among the public whom they hope to sway to their belief systems. The approach is a classic “merchants of doubt” ploy that we witness continually and which perpetually creates noise and distraction throughout public discourse on everything from the health risks of smoking to the validity of global warming.

I am a bit annoyed at that [sic] the U.S. National Park Service would send yet another of these proposals for me to wade through. In the past they came from the Grand Canyon National History Association. Your internal screening processes should include an examination of the credentials of the submitters so that those who represent inappropriate interests should be screened out.

It’s fair to say Huntoon didn’t address the “science” in Snelling’s proposal, but he wasn’t criticizing Snelling for being a Christian. His argument was that this wasn’t a legitimate proposal to begin with because Snelling wasn’t a credible researcher. That made his entire endeavor meaningless.

After Newton apologized to Huntoon for “the inconvenience this caused” him, he responded that “Reviewing is fine, just not processing the dead end creationist material.”

One other peer reviewer, Ron Blakey, said, “It is difficult to review such an outlandish proposal. The author seems to have a total lack of understanding of the topic. I’m not sure what else to say about this.”

You get the idea here. Snelling hasn’t produced any credible, peer-reviewed research in decades. His affiliations are suspect because they don’t advance science while actively spreading misinformation. His proposal showed his own ignorance of the topic. And the people who were supposed to vouch for him had their own obvious biases.

No wonder the proposal was rejected.

It was like a fifth grader writing a college admissions essay; when it’s so obviously juvenile, rejecting it is the only sensible thing to do.

That’s not discrimination; it’s what we expect from the permit granting process. If bouncers let everyone through, we wouldn’t need them.

But we all know how conservative Christian groups handle these matters. They can never admit they don’t have merit to their case. It’s always about persecution, and this is no different.

Let’s hope a judge realizes that. 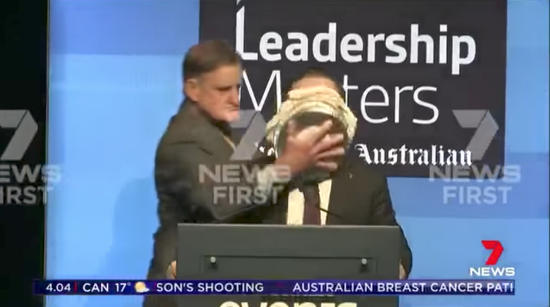 May 10, 2017
Christian Activist Slams Pie in Face of Qantas CEO Who Supports Marriage Equality
Next Post