The #ThingsJesusNeverSaid Hashtag Is Whitewashing What He Actually Said May 6, 2017 Bo Gardiner

The #ThingsJesusNeverSaid Hashtag Is Whitewashing What He Actually Said

As I write this, Twitter’s top trending hashtag is #ThingsJesusNeverSaid.

Guys, we need to talk.

Certainly it helps to expose the hypocrisy of conservative Christian “values voters” by comparing their economic views to those of Jesus. And it’s often a powerful point. Jesus would not be thrilled with the spreading Trumpian philosophy that virtue is measured by financial success — the logical evolution of wildly popular “prosperity gospel” ministries.

So Twitter is filled with tweets like these today, that (no) God willing, will hopefully touch some hearts and minds: 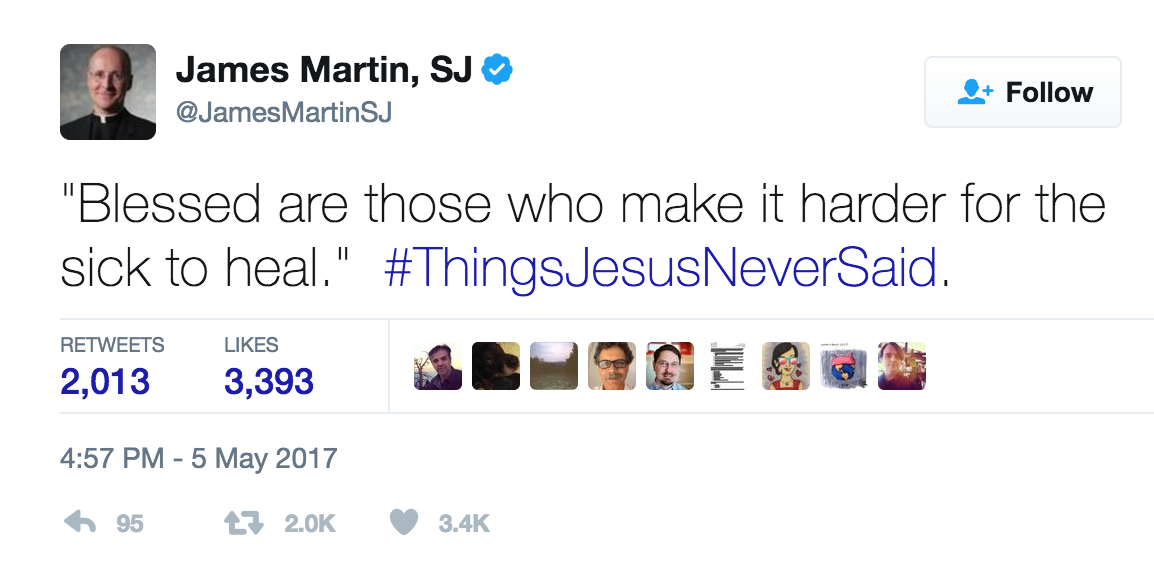 @JamesMartinSJ "Sorry, I would heal you, but leprosy is a pre-existing condition." #ThingsJesusNeverSaid

"Blessed are those who make it harder for the stranger to find welcome." #ThingsJesusNeverSaid

#ThingsJesusNeverSaid : Let the hungry starve, Do not care for the sick, Curse the poor, HATE your neighbor — especially the gay ones.

#ThingsJesusNeverSaid The poor shall receive bread and wine, but first we'll give it to the rich and it'll trickle down to you eventually

"You have heard it was said, 'Eye for eye, and tooth for tooth.' But I say to you drop bombs on those mofos." #ThingsJesusNeverSaid

Jesus may have been to the left on economic policy, but on social and military policy? The same Jesus that conservative Christians often use to justify anti-gay bigotry and religious wars? We’re not talking about a pro-LGBT rights, religiously tolerant peacenik.

Have we forgotten that most Christians believe there’s only one God in three persons, and when we promote the Sandaled One’s words, we are essentially promoting the genocide, torture, slavery, rape, and religious intolerance routinely seen in the Old Testament? Just a few verses after the lefty favorite, “Blessed are the meek,” Jesus reiterates His support for Dad’s approval of all those awful things. Let the Man-God Himself remind you:

Pussy-grabbing got you down?  So you’re tweeting, “what would Jesus do about respecting women?” Christ on a cracker.

Correcting Republicans by quoting Jesus on health care? You mean, like when He says faith healing is the only way to cure epilepsy, so who needs health insurance?

No wonder conservatives are thrilled when the left wants to talk about Jesus. How are we supposed to explain to our children why we say Jesus is so great if the actual Bible is so evil?

For what it’s worth, given my lack of Twitter followers, here are my contributions to today’s hashtag:

Stop whitewashing Bible. Jesus never said "Torture is wrong" or "Rape is wrong," but promised eternal torture for many #ThingsJesusNeverSaid

"You don't have to belong to my new religion to be a good person or prevent me torturing you forever." #ThingsJesusNeverSaid

By all means, let’s keep “values voters” on blast for their indecent values. It’s fine to expose their hypocrisy by pointing out what Jesus said on certain issues.  But remember that too much elevation of Jesus is dangerous. It’s rather simple to “prove” with Jesus’ words that anyone not like them deserves either death, torture, or at least contempt.

Sure, nowadays only the insane among them are inspired by Jesus to literally kill and torture us. The rest merely absorb the message of intolerance, cruelty, and injustice and repackage it into something supposedly wholesome.

May 6, 2017
An Atheist's Godless Invocation in Eustis (FL) is "Corrected" By a Commissioner's Christian Prayer
Next Post 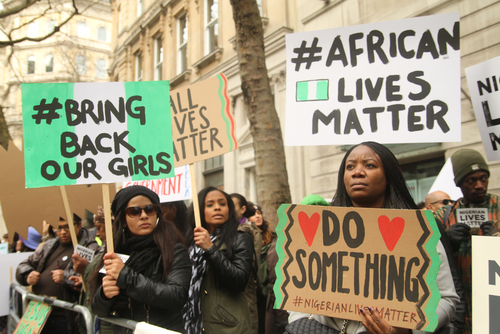 May 6, 2017 Radical Islamic Group Boko Haram Frees More Than 80 Kidnapped Girls
Browse Our Archives
What Are Your Thoughts?leave a comment