In case you need another reminder that our country is far from being great (again), the United Methodist Church — the third largest religious denomination in the U.S. — issued a formal slap on the wrist to a female bishop who (gasp) is openly gay, but they didn’t kick her out… yet.

It’s important to understand how divided the 13-million-member UMC is on the issue of homosexuality, because even several priests don’t have a problem with it. In 2007, Rev. Frank Schaefer officiated his gay son’s wedding, only to be charged by Church leaders in 2013 for “conducting a ceremony that celebrates homosexual unions; and disobedience to the order and discipline of the United Methodist Church.” He was suspended for 30 days.

Rev. Thomas Ogletree also presided over his son’s wedding to another man in 2012. But in his case, Bishop Martin McLee simply announced that Ogletree had “violated the Discipline”… and left it at that. There was no punishment.

Both of those men weren’t seriously punished, because they were officiating weddings for their gay kids. It’s not like they were gay themselves, and these were their kids.

It was a different story in 2015, when Rev. Benjamin Hutchison, who was in a same-sex relationship, resigned on his own instead of letting the Church kick him out. (His congregation loved him and didn’t want to see him go.)

That’s why this week’s events were such a big deal. Karen Oliveto isn’t just a minister in the Church; she’s a Bishop. (Women are allowed to be ordained in the UMC, so that in itself isn’t a big deal.) 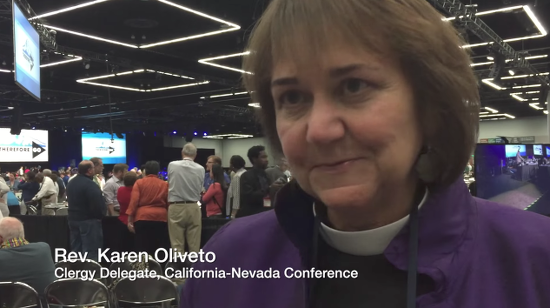 However, Oliveto is married… to another woman. So there were looming questions over how the Church would handle it. Would she be punished? If she wasn’t, what was the UMC saying about its position on homosexuality? As it stands, the Church believes the “practice of homosexuality is incompatible with Christian teaching.”

The Church’s decision was finally made public last night: They have no freaking clue what to do with her. They said she broke the rules — along with the people who consecrated her — but they didn’t punish her beyond that just yet.

The United Methodist Church’s top court has ruled that the consecration of an openly gay pastor as bishop is against church law.

But in a somewhat muddled ruling that could reflect the UMC’s ongoing struggle to determine how great a role LGBT members can play in the denomination, the court also ruled that the Rev. Karen Oliveto, the UMC’s first openly gay bishop, “remains in good standing.”

The UMC leaders have to know that kicking her out of the Church would mean they’d also lose all the believers who side with her instead of with a denomination that continues to promote bigotry and intolerance. At the same time, keeping Oliveto around means they’d be pissing off their most devout members.

So they said she broke the rules but could keep her job.

This is what happens when religious rules meet common sense. When they don’t overlap, the Church has to resort to all sorts of mental gymnastics to push the two sides together.

The Church announced earlier this week that they’d resolve this homosexuality issue once and for all in 2019 during a special general conference. (Because, when God’s in the way, it takes years for religious leaders to decide if they’re committed to human rights…)

The funniest part of this whole story is how Oliveto’s “outing,” so to speak, sounds like the basis for Emo Philips‘ famous joke about the man who belonged to the Northern Conservative Baptist Great Lakes Region Council of 1912.

Bishop Oliveto was elected by the church’s Western Jurisdiction last summer and assigned to oversee about 400 congregations in Colorado, Montana, Wyoming, Utah and Idaho.

Her election was immediately challenged by the church’s South Central jurisdiction, which argued that the decision violated the church’s ban on ordaining gay people.

Religious turf wars. All over an issue that the rest of us resolved a long time ago.

For now, Oliveto’s fate hinges on whatever the College of Bishops in the Western Jurisdiction decides. They could suspend her. They could force her into an early retirement. We’ll find out in a few months.

In the meantime, let’s admit it’s absurd that they’re still debating marriage equality and homosexuality. Just because they have a longstanding tradition of bigotry doesn’t mean they need to stick to it. Reasonable, tolerant people don’t have debates over how to deal with people who are gay. We accept it and move on because it’s irrelevant. The fact that this is a matter of conflict within the Church ought to be all the reason decent people need to stop calling themselves Methodists. 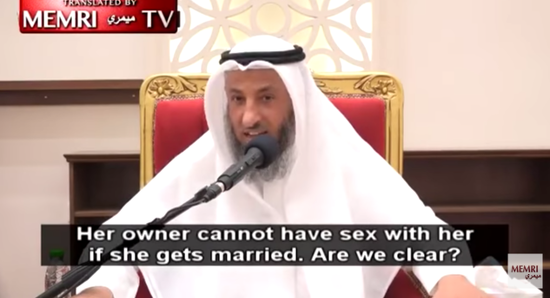 April 28, 2017
Extremist Cleric: During Jihad, Muslims Cannot Have Sex With Enslaved Girls If They Get Married
Next Post 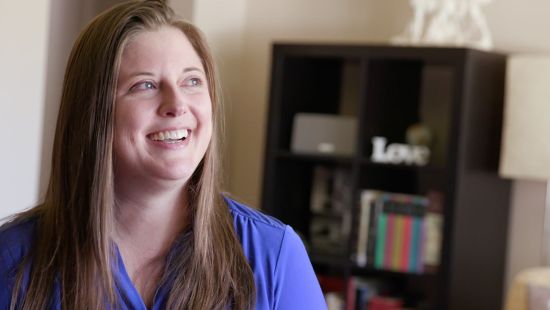